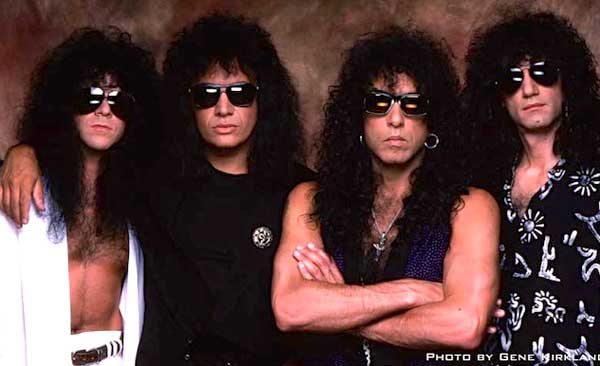 Hot Mess In The Shade.

irst of all, too many songs. Like the emperor summing up Mozart in AMADEUS: “Too many notes.” Well, Hot In The Shade does not have “too many notes” – that would be Animalize – but it seems like producers Paul Stanley and Gene Simmons crammed every sticky-sweet, trashy-funk, dirty-glam, sweaty-shoed cockrocker they could find into this 15th studio KISS album (23rd overall). Hmm, 15th album – 15 songs… Was that the concept?

Lacking cohesion or direction, Hot In The Shade is a Hot MESS In The Shade. The band that had found direction (on Crazy Nights – even if that direction was simpering and obsequious) was flailing again. They had definitely made a choice to throw out the stringpads (the only songs featuring keyboards, Hide Your Heart and Forever), so the harder rock direction was welcome, and the sonic quality of the album was raunchy, as was Carr’s urgent drumming, and Kulick rattling off consistently stunning solos that seemed effortless; it is simply just a lack of good songs. Where did all these duds come from?

I can see the reason many fans complain this album is made up of demos. However, being demos is not the issue (sometimes the demonstration version of a song IS its best version); civilians were mistaking the lack of quality songwriting for lack of production. Grasping an aspect of the music industry they thought they understood, they complained Shade was “made up of demos.” What they’re saying is that some of the songs sound half-baked and scattershot. (Then again, when listening to that lack-of-fills drum track on Love’s A Slap In The Face, we wonder if it’s because Gene wanted Eric to emulate AC/DC’s Phil Rudd, or because he just couldn’t program that drum machine…) When listened to in a complete block, the songs don’t do the album as a whole justice, but if listened to individually, each song has its own cool space; they just don’t fit together as a unit. There’s also something to be said for the album title spelling HITS as an acronym, but that’s probably just coincidence… for a band that meticulously crafts all its marketing gimmicks… yeah, just coincidence…)

Posterity has been cruel to this album, the only songs remaining on live lists being the two singles Forever and Hide Your Heart. Admittedly, those two songs shine out like musical beacons amongst this bland-rock desert. On KISS Kruises and at KISS Conventions, the band regularly perform deep cuts from their full catalog for the fans, but they can safely avoid this album’s deep end; no one is requesting Betrayed or Silver Spoon any time soon. 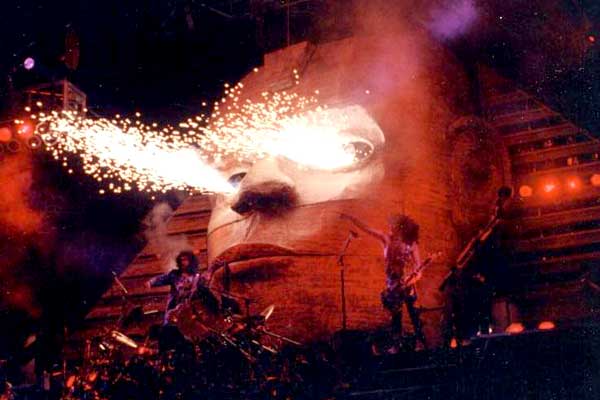 Rise To It. A powerful riff-rock opener that belies the weakness of the album compleat. Paul Stanley – for the 178th time on record – once again sings about his erection.

The video to Rise To It took our breath away. Or more correctly, the INTRO to the video. Now keep in mind this is the era when the legendary KISS makeup was completely lost to the past, dead to the world, and in the intro sequence we see a title card: BACKSTAGE 1975, and then we see – Paul Stanley and Gene Simmons sitting at a dressing room mirror applying the Starchild and Demon! Two faceless guys in the background are Peter and Ace. Paying tribute to their past? A peek into the Reunion future? Ironically, while they apply it, they’re talking about removing it.

Then they perform the song – but out of makeup, with Bruce Kulick and Eric Carr. A soft-focus “live” gig for a small audience, with no lightshow and MTV crash-cuts. And for the first time in a long time – KISS look cool! At last settling on faux-street clothes and cohesive hairstyles that bespoke their rock god status, simultaneously making them seem like accessible regular guys.

The video is bookended by Stanley and Simmons in full makeup and costume leaving the dressing room to the roar of the mythic crowd. (And the chagrin of fanboys – though the title card said 1975, Paul’s costume is from 1977 and Gene’s is from 1980!)

On Betrayed and Prisoner Of Love, Gene uses vocal techniques he first revealed on Unmasked – that high clean hard palate voice that enables him to sound like any old eighties hair-vocalist; he gains range but loses individuality with that voice. The rest of the album is in his usual growl. Now this could be construed as variety or diversity – after all, we don’t want to hear 6 Simmons songs that sound all the same – but it comes off as lackluster lack of direction. His third song on Side 1 sits better with us – Love’s A Slap In The Face – because it’s Gene doing Gene, rather than Jani Lane.

Read My Body. What is that little temple-block in the intro? Like KISS meets Tainted Love. A guilty pleasure that Paul funks out, with its share of piggish bits (those rap-style shouts at the end of every line of verse) and catchy choruses that imply – unsurprisingly – having sex with Paul.

Hide Your Heart. One of the most “cosmopolitan” KISS songs, as it involves three gang teenagers in a love triangle, a topic far removed from KISS’s usual fare – Paul’s and Gene’s crotches. Originally written for Crazy Nights (by Stanley, Desmond Child and Holly Knight) and rejected, the song was then shopped around, and four other artists bought it and recorded it (Bonnie Tyler, Molly Hatchet, Robin Beck, and – the ex-spaceman himself, Ace Frehley, for his 1989 album Trouble Walkin’!)

KISS’s video for Hide Your Heart was another first, as it featured a completely secondary story to the shots of the band performing the song. That other story, shot in black and white, featured three Latin teens getting tangled; contrasted with the full-color band playing atop the Hotel Royale in Los Angeles. Censors in the States edited out every gang shot where a gun could be seen, so the story must have seemed piecemeal to American viewers, but everywhere else in the world we clearly saw the shootout atop that roof. America – gun-death capital of the world – with censors too gutless to show guns in a music video… Ironic, no? 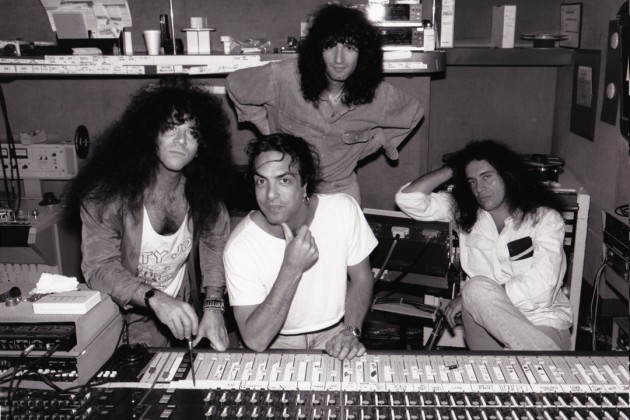 KISS in the studio with Dean Martin producing.

Forever. Stanley co-writes with Michael Bolton. Yep, even that guy with the soppy ballads has a one-degree connection to KISS: Bruce Kulick was in Bolton’s 1979 band, Blackjack. Reaching #8 on Billboard charts, Forever would be the band’s highest charting single since Beth. Miles above its surrounding material, we can hear the craft that has gone into this lachrymose wailer, with surprisingly heavy drumming that somehow works.

Kulick would track an admittedly super electric solo, only to be told by producer Stanley that he needed to rethink it as an acoustic solo! He relates he was pissed, but – professional craftsman that he is – laid down an evocative acoustic gem.

The sepia-tone video showcases the band looking casual, big bouffant hairdos, at last at ease with their non-makeup personas, not trying too hard to be colorful or look-at-me; Gene sits on a stool, while Paul’s voice careens; Eric’s hair shaggies and Bruce fretboards nirvana; camera moving amongst the band in a room lit like a cathedral.

Vini Poncia (the producer responsible for Dynasty and Unmasked) co-writes with both Stanley and Simmons, but turns out better material with Simmons; his output with Stanley ends up resembling those vapid disco ducks (King Of Hearts, Silver Spoon).

The Street Giveth And The Street Taketh Away. Gene co-writes this song and Betrayed with the KISS go-fer at that stage, a young guitarist named Tommy Thayer. Each verse starts with a “Hey, man!” very very very reminiscent of Bowie’s Suffragette City. To add to the Bowie evocation, one lyric mentions “rock and roll suicide” (the name of the song that closed the album with Suffragette on it, Ziggy Stardust). (Okay, for the purists: The Rise and Fall of Ziggy Stardust and the Spiders From Mars. Happy?)

You Love Me To Hate You. Interesting harmonies keep this Paul contradictor from suffering at the hands of this album.

Somewhere Between Heaven And Hell. One of the albums catchier songs, composited from War Machine and that song we just heard, Love’s A Slap In The Face.

Little Caesar. Eric Carr’s one and only lead vocal contribution to KISS is probably the best song on the album! Written by Carr and tightened by Simmons and Adam Mitchell, it’s a punchy funky walking riff about being a man in a cruel world, Carr’s scratchy vocals lending it all the street it needs: “Well they tried to tell you that the world is rough / But they never rocked it hard enough!” Based partly on Gene’s love of old movies (Edward G. Robinson’s 1931 film of the same name) and Gene’s nickname for Little Eric, it should have closed the album on its E power chords. Instead, a Gene throwaway throws away the impact… 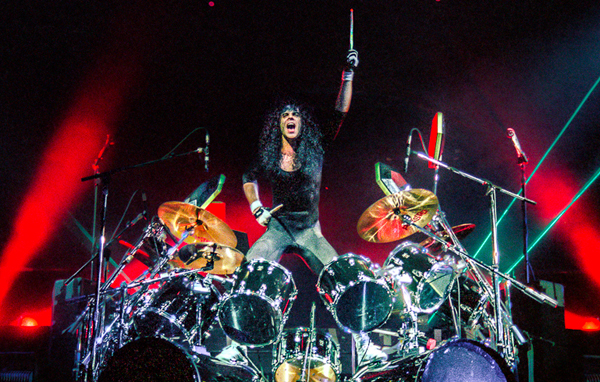 The album cover was a little lackluster – the Sphinx wearing shades – but it was a tie-in with the Hot In The Shade Tour, which featured an awe-inspiring giant Sphinx head in place of the KISS sign, nicknamed Leon (of course). Complete with his complement of lighting in his head-dress and explosive eyes.

The material might have been at a low ebb, but KISS were on their way back visually, with Gene already tilting toward that scruffy leather street-cred he would adopt during Revenge. Little did we know it, but they were on their way back musically as well. Sadly, this would be Eric Carr’s last full album with the band, as cancer would come calling before the next album’s tracking sessions. How amazing then, that at such an emotional nadir, that next album would be one of the best of KISS’s career. 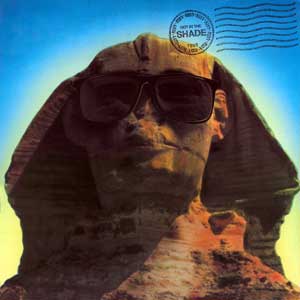 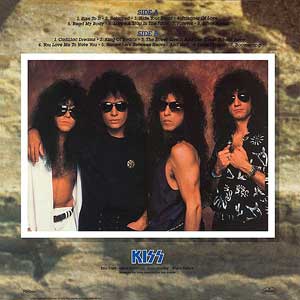