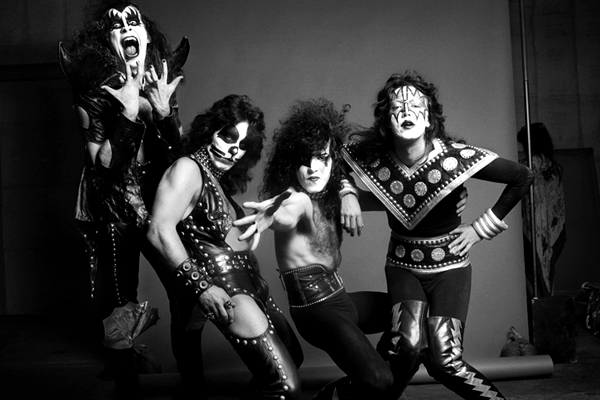 KISS 1974: Still standing… and posing in those sinister, rockstar ways.

n October 1974, the second KISS album, Hotter Than Hell, would appear just eight months after their debut, Kiss (Feb 1974). What the critics thought was a one-off stunt – this bunch of klowns wearing makeup – came back and slapped them in the face real quick real hard.

Like a mastodon struggling through quicksand, Hotter Than Hell is darker, gloomier, heavier and more muscular than Kiss – with even worse production. What were producers Kenny Kerner and Richie Wise doing? Under the strangely hypnotic guitars, the drums sound like cardboard boxes! Funnily enough, the album does not “suffer” from this lackluster audio, as we’ve grown accustomed to hearing Hotter Than Hell with that weird “hollowness.” So much so that when KISS remastered the album in 1997 – it sounded WEIRD!

Lead vocalist/rhythm guitarist Paul Stanley and co-lead vocalist/bassist Gene Simmons pen and sing most of the tracks, with a newfound maturity. But that may be an illusion, as many of these songs are still remnants from their days in Wicked Lester (pre-KISS), just formulated into final product.

The only two “straight-ahead” rockers are Mainline and Comin’ Home, otherwise every other song has a unique hook – something that separates it from simple four-chord fast-forward dreck. As with their first album, to their credit, KISS aim to make their simple music not that simple. Like that album, there remains a “dirtiness” to the riffs that do not quite resolve how you’d expect.

Prime cuts include the title track (Stanley admitting freely that Hotter Than Hell was copped from Free’s All Right Now), the Frehley-penned chunker Parasite, and the thick-as-syrup Let Me Go Rock ‘n’ Roll with its scorching lead guitarwork in every spare breathing space.

And the freight train voyeurism of Watchin’ You: Ever since that Will Ferrell/Christopher Walken sketch, everyone now thinks it’s their right to make fun of cowbells – but Holy God! – has there ever been a more heavy, more evil cowbell than right here?! “And I’m standin’ here, not quite aware, yeah yeah-ah / And I’m tryin’ baby – tryin’ not to stare-aaaah! / …Everybody else is here / Yes, everybody else is here / Everybody else is here – watchin’ you!” As an impressionable young kid, I would imagine one of those pagan 70’s sex parties and some drunken, drugged slut swaying sensually naked on a table in some lava-lamped den while KISS and others ogled her, some lasciviously, some just offhanded. Hey, it’s the 70s – this is every Tuesday.

Lead guitarist Ace Frehley gets more songwriting licks in (with Parasite, Comin’ Home and Strange Ways), although the KISS concept of creating another Beatles band model – where all four band members were equally prominent – was not to force him out of seclusion and onto the mic. Totally lacking confidence in his singing ability, he hands off vocal duties to Simmons, Stanley and Criss respectively.

Can anything possibly be heavier than the guitar sound and its attendant riff in the closing track, Strange Ways? With a guitar solo that can only be described as warp factor insane.

Once again, many of the songs on this formative album are regular inclusions in the KISS live set over 40 years later.

Kabuki, meet KISS. Seemingly embracing their visual origins, KISS appear on an album cover decidedly manga, with a symbol that would erroneously be thought of as KISS’s name in Japanese. But it is a symbol called chikara that means “power” (and would feature most prominently on Eric Carr’s drumkit in the far-flung future). And the back cover… 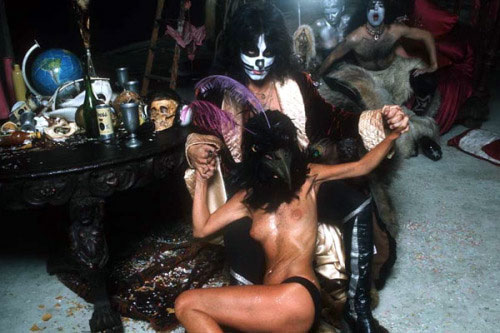 Ah, so this is what rock n roll is all about…

Drunken, disheveled debauchery. Reportedly, everyone was off their face at this photo shoot (except Gene, advocate for clean living, no drinks, no drugs… uh, and fucking everything that moves). Nakedness, unconsciousness, Bacchanalia. It illustrates how KISS, at this early stage of their career, were definitely not after the demographic they would eventually become associated with – little kids. They were an adult band, pushing the envelope on the permissiveness of rock and roll. (As a youngster, I admit I was stunned when I saw those Destroyer-era shots of the band on motorbikes with a naked woman being brutalized between them.) Throughout their career, there have always been obscure photo shoots with debased women in various states of undress (the 1977 Love Gun cover comes to mind – a painting, but truly indicative of the band’s image), from the 1976 chopper shoot to the 1999 Playboy issue.

All that dirty sex was just intolerable, inappropriate and ungodly. And hotter than hell. 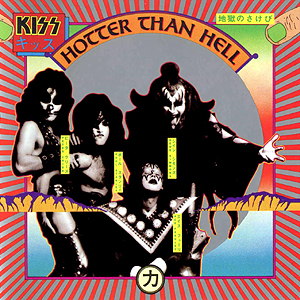 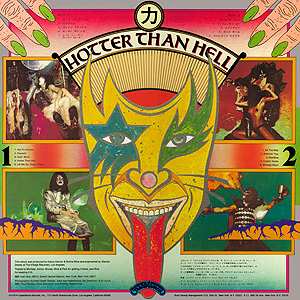