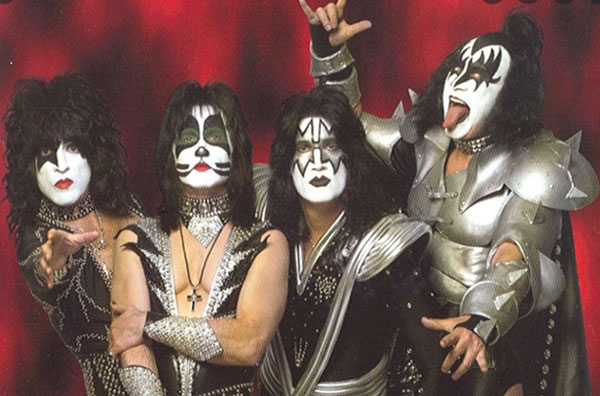 Japan: “We don’t care WHO play these songs – all you KISS guys look same to us!”

15 Reasons Not To Like KISS: the George Lucas Effect.

he album Jigoku-Retsuden (“Legends From Hell”) is 15 old KISS songs (from mainly the makeup era), re-recorded by the then-current lineup of KISS (Gene Simmons, Paul Stanley, Tommy Thayer, Eric Singer), exclusively for sale in Japan. Because, I guess, the Japanese like to hear KISS classics that don’t sound anything like KISS.

Originally released in 2008, I heard Jigoku-Retsuden as one of the Bonus Discs included in the Sonic Boom release (2009). When I first put the CD in, I didn’t know what I was hearing, as there are no liner notes about this Disc anywhere on the fold-out packaging, except for the disc title “KISS Klassics” and the song titles. I honestly thought it was either a KISS cover band doing oldies with modern production, OR that KISS had remixed their oldies with wildly different EQ, especially on the drums, and with different vocal takes from the original recordings, that were not used at the time. I would never have guessed that my heroes would have gone into the studio to re-hash these cobwebbed standards unnecessarily for only one of their overseas markets, with their never-before-recorded lineup, when they could-have/should-have been releasing new material with that same talented lineup.

WARNING: THIS ALBUM IS DEFINITELY NOT FOR ACE-LOONIES OR PETER-LOONIES.

It was 10 years since Psycho Circus, KISS’s last album of new material, with the original lineup that was doomed to re-split from the moment they re-grouped (Gene Simmons, Paul Stanley, Ace Frehley and Peter Criss), and Simmons and Stanley had made it clear that they didn’t want Psycho to be their last original album (that’s how much they wanted to cast off the stank of that dumbo duo), so one would think they’d camp in some studio until a new album of original material was birthed… but no! They camped in a studio alright – only to re-record their halcyon hits from yesteryear! I mean, Whaaaa–?

The reason the vocals sound like alternate takes of the original material is that Gene’s and Paul’s vocals surprisingly sound almost exactly like their takes from 25 to 35 years ago, in timbre and inflection! Yet minute variations give them away that they’re not the original tracks. Still, think about what a feat that is: vocalists never sing their songs exactly like the record over time – at any given live performance, listen to the way Paul has embellished his vocal lines over the years – and now he’s gone back into the studio and sung them practically note for note and inflection for inflection like he did decades ago?! That’s commitment (misplaced as it is)! And the only reason we can pick up on those minute variations is because WE are the crazy ones; WE’VE grown so used to hearing those recorded tracks a certain way that any slight deviation skips our lie detector needles.

It’s also a testament to Tommy Thayer’s abilities that he can reproduce Ace’s guitar lines so exactingly, although he does sound “too” polished, not as “dirty” as Ace’s original lines. That’s not necessarily a bad thing – but it IS here, where it is sullying our childhood memories of that “sound” we grew up with. 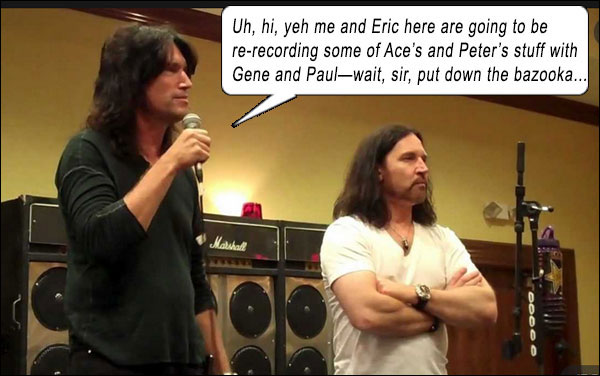 The old songs (Deuce, Hotter Than Hell) benefit from the upgraded production, especially in the crisp drum sounds (even though they are robbing us of our youth – those early songs were recorded terribly, but it’s that very imperfection that we’re used to hearing, that we love as legacy); while the songs from the 80’s era (Heaven’s On Fire, Lick It Up, Forever) sound just terrible. The production was great on those 80’s songs in their original form. And don’t even speak of specialty songs like I Love It Loud, where Eric Carr’s original mountainous Bonham homage is completely lost!

On Detroit Rock City there is much wrong and much right: WRONG – gone is that Bob Ezrin production of those skyscraper drums and that spaciousness of the track; gone are those foley tidbits of the youth in his car… RIGHT: Paul is still hitting the high-C in the verses; as always, the abilities of Thayer and Singer to reproduce what was once someone else’s feel and lines is incredible to hear.

Shout It Out Loud suffers from the same problems as Detroit, coming from the same album – lost the spaciousness (and the big piano octaves mimicking the riff). And here’s an example of a miniscule moment that means the world to a listener recapturing his youth every time he hears this song: Gene’s line, “Just forget the things that you been told!” – in this new recording, he is not exactly flat on the high note, but he rolls off the target, whereas in the original, he hits the high “for-GET” cleanly and powerfully. That was a key moment for ME that made me love the song – and it has been lost… As there would be other innumerable key moments lost for other listeners; who knows what fans focus on? Who knows what memories people are conjuring, that will be ruined by the smallest shift in dynamic on any of these songs?

Hotter Than Hell, lifted from one of the worst-produced albums – just sounds WEIRD. With its righteous production now, it sounds WRONG. They didn’t try to recapture the cardboard drums or the lounge-room ambience of the original one bit – and it’s a tough call, because in re-recording anything, you’re going to try to BE BEST, right? But in art… I dunno if that’s the way to go.

And so it goes with all the songs on Jigoku-Retsuden, WRONG and RIGHT elements seesawing, creating this WEIRD seesaw of emotions in your kisser (I Was Made for Lovin’ You – Paul vetoes singing the highest of the high falsetto lines in the breakdown; Calling Dr Love – love the groovy drumming Eric Singer puts into the 2nd verse, but then overall the production sounds too slick for my old-fan ears; Love Gun sounds exact, but then Thayer does the pinch harmonics after the solo an octave lower than Ace did them and ruins my buzz; Singer lays a great caustic vocal on Black Diamond, and Thayer imitates Frehley so well – and they even include the slowing-down effect in the outro, like the original – that it gets us wondering again about the validity of this whole project in the first place. If it’s this exact – why do it?

Musicians, take a lesson: NEVER go back into your previous art and re-do it. NEVER.

For anyone over 40, this album is an evil twin, a twisted clone, something unclassifiable and alien. Listening to the re-done songs makes me uncomfortable. It was an income generator for a specific market (Japan), and was not released anywhere else in the world, which makes me believe KISS Mgmt must have been aware it might adversely affect longtime fans in Caucasian markets (not to mention the Ace-Loonies and Peter-Loonies who must have hit the roof when they realized their demagogues were being replaced on classic songs!). To be clear: Simmons and Stanley were in no way trying to erase their history—ahem, KISStory by “recording over” any past recordings and re-releasing them as if they’ve always been that way (unlike the venal Ozzy Osbourne Mgmt recording over Daisley’s and Kerslake’s tracks), and were not trying to make people forget that Ace, Peter, Mark, Vinnie or Bruce ever existed (unlike Priest’s or Maiden’s unfortunate dealings with substitute singers). They were simply leveraging an overseas market; it’s not a grift, it’s not a scam, it’s new product in exchange for yen (even though all the tracks would find their way onto YouTube for free, and even though some diehards like myself might dispute the exact meaning of “new”).

KISS have George Lucas-ed themselves into a wasted opportunity. The only people inclined to love this album are those fans young enough to think that Greedo shot first. 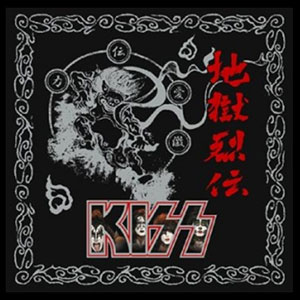 Deuce
Detroit Rock City
Shout It Out Loud
Hotter Than Hell
Calling Dr. Love
Love Gun
I Was Made For Lovin’ You
Heaven’s On Fire
Lick It Up
I Love It Loud
Forever
Christine Sixteen
Do You Love Me
Black Diamond
Rock And Roll All Nite

The Jigoku-Retsuden package includes a DVD of 1977 concert footage from Budokan Hall, Japan: 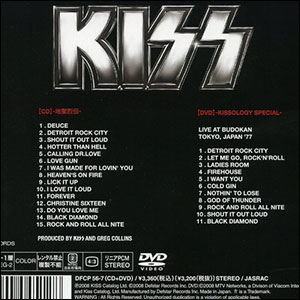