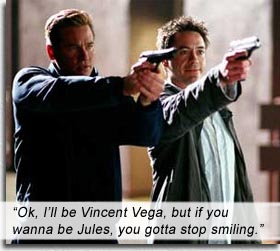 A petty thief (Robert Downey Jr.) finds himself allied with a gay private detective (Val Kilmer) and thrown into a Los Angeles murder mystery. It’s like LETHAL WEAPON if Riggs and Murtaugh were totally incompetent.

KISS KISS BANG BANG is a self-aware, wry action comedy, from a book by Brett Halliday (Bodies Are Where You Find Them), directed sassily by Shane Black, the writer who kickstarted the LETHAL WEAPON franchise with his renegade buddy cop story.

So Shane Black throws another buddy comedy our way – darker, more convoluted, screaming Hollywood at every turn of the screw, as Harry Lockhart (Downey), a thief mistaken for an actor, is invited to research a role by going for a “ride-along” with a private dick with the unlikely name of Gay Perry (Kilmer). Corbin Bernsen plays the rich man who hires Perry to investigate the disappearance of his daughter. Michelle Monaghan is Harmony, a girl that Harry had a crush on in his youth; both of them suddenly involved in a Hollywood murder mystery only proving that KISS KISS BANG BANG is indeed a satire on film noir.

When dead bodies start mounting around Harry, his fake private dicking turns very serious, and there is black comedy juxtaposed with sex and death (a dog eats Harry’s finger; Harry watches a girl die right next to him while he hides under a bed; with their lives at stake, all Harry can think of is bedding Harmony).

Somehow, the usually-plain Monaghan is sensual dynamite as Harmony; when she turns up at Harry’s place in off-the-shoulder lace underthings, like him, we are not listening to a word she says about the mysteries of the dead bodies; like Harry, every opportunity for an askew glance at her pert bod.

As Harry, Harmony and Perry dive headlong into the underbelly of Los Angeles, surprises accumulate like dead bodies. Dialog between Downey and Kilmer is shark-toothed, plot just as jagged, with a payoff that will confuse those viewers who have been staring at Michelle Monaghan’s pert bod.