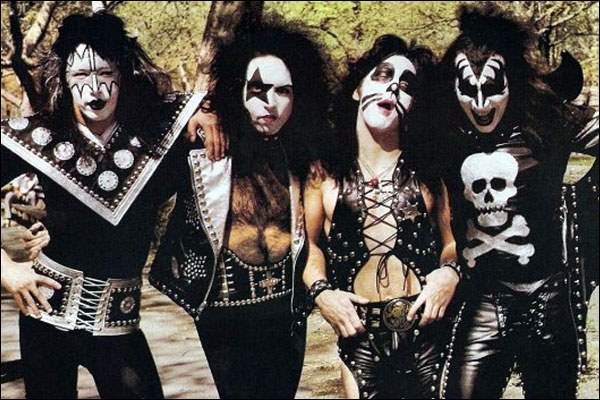 A Diamond in the Black.

n February 1974, the world changed. Some might say, not for the better…

They were The Lover, The Cat, The Demon, The Spaceman. KISS had arrived. In a hail of powerhouse rock and roll and a fog of crabby production, the debut album Kiss introduced the world to what would become a seminal influence on the American rock music industry and a megaforce in multi-media marketing.

It was nothing new musically, it did not break any barriers, it was not political or insightful, and the lyrics might have been penned by a twelve-year-old. It was a collection of simple catchy songs by four young shameless upstarts unafraid of controversy, who were determined to “do anything to make it.” Considering that the bulk of the Kiss album is still the staple of the band’s live shows 40-odd years later, it can safely be said these songs are some of the best, if not the most enduring, in the KISS catalog. (In retrospect, one might be inclined to give this album 9 or 10 Cukees for its now-classic material, but in the hard rock world of 1974, it was really not that polished or brave an offering, considering it was up against killers like Deep Purple’s Burn, Led Zeppelin’s Houses Of The Holy, Queen’s Queen II, Rush’s Rush, Sweet’s Sweet F.A., Aerosmith’s Get Your Wings… Any band’s longevity casts a worthy glow over their formative material, and KISS can easily say that, if nothing else, they have longevity.) 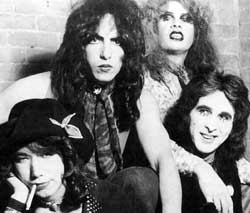 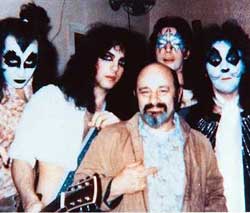 Makeup-2: Gene and Peter – used all the white for yourselves, huh? Leaving none for Paul and Ace. Peter – surprised that anyone would take him seriously, especially now…

There was one guy who had the epitome of the rock and roll voice, one guy who couldn’t quite sing, but growled in tune, and another guy who had a seasoned Rod Stewart rasp, as if he’d been playing pubs all his life (which, of course, he had). And the lead guitarist was a Les Paul-wielding pentatonic space traveler from the planet Jendell. And they all wore whiteface kabuki-styled makeup! And no press were allowed to take pictures of them without it. KISS was never “just” about the music. It all came pre-packaged, so that in a discussion about any KISS album, you could not help but talk about the “image” surrounding it.

And – upstarts that they were – their album cover aped The Beatles’ With The Beatles. (KISS were never shy to admit their influences and plagiarisms – Alice Cooper, The New York Dolls, Beatles, Stones, Zep, et al). There was more than a little resemblance to The Fab Four, as Stanley and Simmons were obviously the two main songwriters on the album, they harmonized with each other, they were a guitarist and a bassist and, we would discover later, they were the duo responsible for the band’s image and everything else. Were they the new Lennon and McCartney? Guffaws… Well… 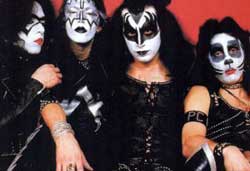 Makeup-3: Getting there… uh, Paul, you know that “bandit” will immediately be sullied by the no-brainers to “ass-bandit,” right? 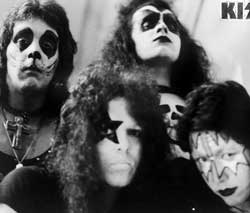 Makeup-4: Paul, what say you splash a bit of red on those sultry lips, and then we can go conquer the world?

… they didn’t take the music farther than where they’d found it (as Lennon and McCartney did), they took MARKETING there (as Lennon, McCartney and every other musical artist at the time could not conceive!) And every band on Earth would benefit from that tectonic shift in perception of how a band could be “sold” to the public. Verily, even The Beatles would benefit from the Diversified Marketing Onslaught business model the KISS Organization would develop.

But enough about lunchboxes and Big Head Dolls. What is the album all about? Pussy.

Strutter. The guy with the rock voice opens the album. In thunderous drums, blazing guitars and a bassline that didn’t need to be that interesting for such a straight-ahead song, we immediately twig that this supposedly simplistic heavy rock is nonetheless not your average three-chord chug. There are interesting things going on all the time. These guys are woiking their limited musical knowledge to its outer edges. And that has always been one of the great things about KISS, fan of their music or not. They’re hungry and dangerous, and have retained that ethos from that day to this. The title of this track would come to describe the singer’s own stage persona – Paul Stanley, lead vocalist, rhythm guitarist and The Lover (aka Starchild), would become one of the foremost frontmen in rock and roll.

Cold Gin. Written by Ace Frehley, lead guitarist and Spaceman (aka Space Ace), and sung (or, more correctly, gargled in acid) by the Demon. Stanley’s opening squeal is less a rock yelp and more the sound of him being pinched on the botty. Sounds a little like Firehouse, but hey, we’ve already confessed to unoriginality.

Let Me Know. A slice of pure rock and roll, Small Faces style – I-IV-V to glory! – with lead guitarwork by Frehley that is Chuck Berry meets Mick Ronson. Who would have thought this alcoholic, irresponsible kid from the Bronx would be the influence for generations of axe-wielders? Besides a surprising and beautiful (did I just describe KISS as “beautiful”?) a cappella stinger, this song boasts an outro lashing by Frehley that would become his staple live solo intro.

Almost an album cover.
Gene, either stick it out or keep it in – no halfway, son!

Kissin’ Time. Some record exec icehole thought this Bobby Rydell cover (from 1959) would be a good tie-in with a national kissing contest, forcing KISS to record this corny badly-produced rocker, with Simmons, Stanley and Criss sharing lead vocals. Back then it was cheesy, but these days, Simmons and Stanley would probably applaud that icehole for his marketing chutzpah.

Deuce. Heavy, dark and strange, written by Simmons, who still doesn’t know – or won’t tell us – what it’s about.

Love Theme from Kiss. An instrumental developed from an existing song called Acrobat. Interesting bootlegs exist of KISS performing extended live versions at club dates, with Peter Criss doing MC duties instead of Stanley (because of the newness of the band, and Criss’s status as the oldest and most experienced member. Funny to note that Criss ran the stage patter like your average pub band, whereas when Stanley took the reins, he boldly turned it into “arena-speak”).

100,000 Years. Criss’s jazz drumming chops would propel this jaunty Stanley swinger with ghost notes that a straight-ahead rock drummer would not have thunk to flay. It would serve as the lead-in to his live drum solo. When I was young, a double-take: Did Paul just say, “You musta been a bitch while I’ve gone”? And long before the New Wave Of British Heavy Metal, here was the bass gallop that would make Steve Harris wet our iron maidens.

The only two songs that are never played anymore are Kissin’ Time and Love Theme. At least three or more of the others, in various combinations, will appear in the KISS live show from here to eternity. Clocking in at a brisk 35 minutes, it was almost like KISS did not have enough material. That would prove utterly wrong, as the band would shotgun their next five studio albums at us, all within a year of each previous release.

KISS, from the very beginning, opened their shows with the MC shouting, “You wanted the best, you got the best: the hottest band in the land – KISS!” which would be amended to “hottest band in the WORLD” in short order as they actually became what they touted. All on the back of a piece of vinyl – this Kiss. 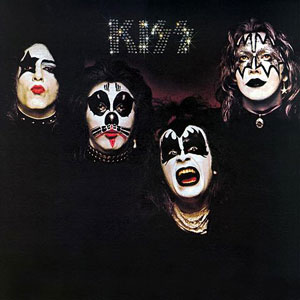 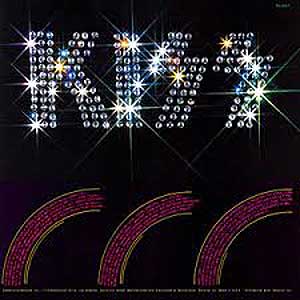