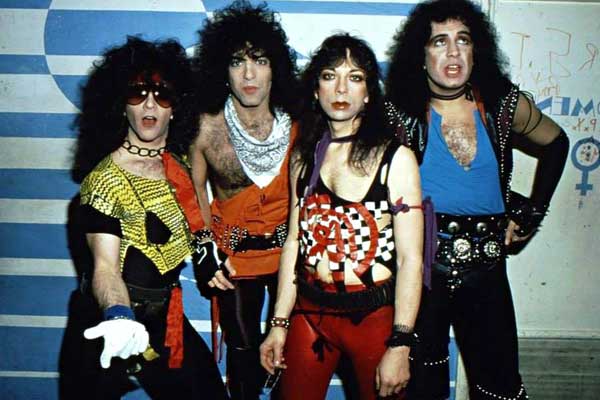 And on the 8th Day, begins anew the naked journey…

ISS – unmasked. No, really! Not like that album called Unmasked where it was just a joke. (Many would call that album a joke as well so, uh – ahem – moving on…)

The news of KISS removing their signature makeup would, in a sense, overshadow the fact that Lick It Up was a nitrous-fueled muscle car. From the opening crash-palace of Exciter to the bestial crunch of Not For The Innocent, from Stanley’s rap stylings in All Hell’s Breaking Loose, to Gene’s sleaze in Dance All Over Your Face, KISS’s 11th studio album (15th if counting the Solos) builds on the foundation laid by 1982’s Creatures Of The Night – a hard rock/heavy metal Last-Of-The-V8-Inteceptors that would go double-platinum.

Something so appealing about that minimalist cover. White. Classic. Showing the four current KISS members at the time – sans makeup: Vinnie Vincent, Eric Carr, Gene Simmons and Paul Stanley. The album would be released on the day KISS “unmask” on MTV, September 18, 1983. It was a day of uncertain optimism, because Our Heroes were seemingly moving past their infancy, and simultaneously a day of embarrassment for Simmons and Stanley, having to put up with Vinnie Vincent answering questions authoritatively, as if anyone really cared what he looked like – he had only been “masked” for one tour and never featured in full costume on the cover of any album (not even the one he played on – Creatures!). 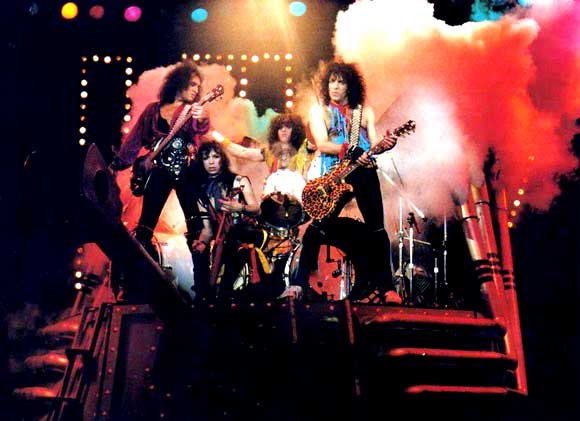 The Jewish Nation plans its retaking of Germany…
One of the cooler props retained from the Creatures tour – the drum riser tank turret that rotated and “fired” and smoked, complete with tank-tread foley.

Exciter. Paul Stanley throws down the gauntlet on the opening track. At the top of his game, no vocalist on Earth can show this man how it’s done at this moment in his career. There is a steaming guitar solo by session player Rick Derringer. But before the wrath of the solo, there is the leadup, the memorable “hummable” part – and it’s great to hear KISS have not forgotten that philosophy. Derringer firmly bridges Frehley and Vincent (we would never have been able to tell it was neither Spaceman nor Wizard), in a cacophonous delay solo like the plaintive cries of the Gaos birds before they attack Gamera.

Not For The Innocent. “I spit the hangman in his face / And hung him with his noose…” The heavens shudder as Gene Simmons unleashes this steel-thumping paean to being R-rated. The pendulum was definitely swinging the other way with this release; gone were the primary colors of the disco era, gone was that which defined KISS in those glitter days – the makeup – which now seemed to belong to a more innocent era. Made heavier by that 6/4 bar thrown in at the head of each chorus line, then sealed with the ferocious way Simmons attacks the first word: “NOT for the innocent…” And when he sings the last line, “Let the beast run WILD…” I swear he’s turning into a werewolf. 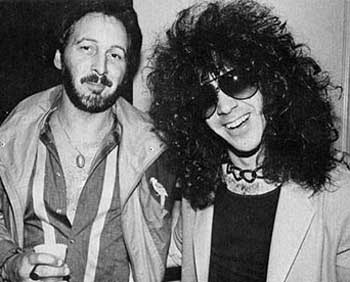 Lick It Up. Ordinary V-IV-I chugger with extraordinary vocals. Stanley is singing so high (up to C#5 and E5) that it makes the song worth listening to. We never quite appreciate how good Stanley is, and has been all his life, as a vocalist, because we have grown accustomed to hearing him belting these acrobatic vocal lines – until we hear a vocal coach analyzing it.

Lick It Up would be the first single – and first VIDEO – of KISS without makeup. Just like the unmasking, the video is cool and funny and embarrassing all at once. We don’t really care about the apocalyptic theme or the warrior women; we’re just here to see KISS not being Demon Starchild Fox Wizard. It’s cool to see Gene and Paul bare-faced (let’s face it: they were the curios, not Eric or Vinnie) – with or without makeup, they’re gonna exude those personas; Eric chugs along beside them like a little huggy bear, trying not to get bodily pushed out of frame by Gene’s burgeoning mass; and skinny, androgynous Vinnie? Well, most people thought, “I didn’t know KISS had a girl in the band now!” (Actually, he does look kinda like a crazy ex-chick of mine… Hmm…) Why you lookin’ so tough, man? Nobody knows who you are.

Gene’s been drinking hydrochloric acid again, as he tears into Young And Wasted on Side 1 and its evil twin Fits Like A Glove on Side 2. His vocal cords are tearing themselves a new asshole even as you’re headbanging to these filthy speed-metalers. (Eric would sing lead vocals on Young And Wasted live.)

Paul’s ballad on this album A Million to One is a syrupy-thick cruncher, written for Donna Dixon, the lady he lost to Dan Aykroyd– waitaminute! On the last album, he wrote I Still Love You for Dixon as well. Let it go, man! Let it go!

All Hell’s Breakin’ Loose is the second single and video. Paul’s opening rap is a syncopated piece of brilliance. Heavy chorus, tribal thumping. Besides Carr’s effusive skin-bashing on this album, another “sound” drives KISS like the last of the V8 interceptors. Vinnie’s guitars. Out of the closet on this album, we can hear AND SEE that KISS’s sound is no longer based on Frehley’s Gibson Sunburst Les Paul, but on Vincent’s Furious-Pink Jackson Flying V, that “new” impolite steel under Paul’s and Gene’s vocals. And a guitar more pointy-pointy than the head of Gaos. (Is that the second time I’ve mentioned Gaos? Too much GAMERA on my mind.)

Strangely enough, despite these tough songs and their street-cred look on the album cover, KISS “glammed up” for the Lick It Up tour and TV appearances, wearing more women’s makeup than ever; looking less like the lick-ERS and more like the lick-EES…

vinnie blows his million to one 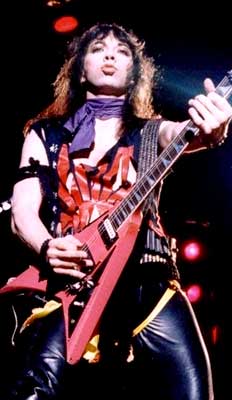 Hard-headed woman in a black dress…

He was the best guitarist KISS ever had. (Shut up, Frehley moaners and groaners!) By that I mean, Vinnie Vincent, within the KISS machine, straddled a perfect equilibrium of memorable guitar licks and shredding. Frehley could make his guitar sing, but he couldn’t shred, and everyone else who came after Vincent was a shredder who had to be reined in. (Yes, Vinnie’s onstage solos had to be reined in – we’re getting to that – but they were still agonizingly excellent.)

There was a million to one chance KISS would ever find a guitarist that suited them after Ace’s departure circa 1981 (wild talk of Eddie Van Halen, Bob Kulick, et al), and there was also a million to one chance that someone scrounging on the LA metal scene and sleeping on furniture-less floors would be hired by KISS. Planets aligned, and Vincent John Cusano saved Creatures Of The Night. In the short time it took to change his name, become the “Ankh Warrior,” tour the world, record another album, and unmask, the reborn Vinnie Vincent would become the “knucklehead” that Simmons constantly accuses him of being. Two million-to-one chances stack-heeling on top of one another – and Vincent blew them both! Can anyone conceive of the conceit of this guy to claim that KISS was holding HIM back?

He never signed a contract, so couldn’t be properly protected on tours, thereby also diminishing KISS’s legal powers; he extended his solos onstage to unreasonable lengths, he forbad other support acts from doing guitar solos, he sued KISS multiple times, he disrespected fans and employees of KISS, embarrassed KISS to the point of Simmons and Stanley apologizing for him… Simmons: “He was probably the most talented of all the new guys that came into the band, singing, playing, writing… and is one of the most difficult people I’ve ever met in my life.” Though Stanley admits, “he was a great talent to write with” he was not a team player and his “ethics were questionable.”

Of course, this is history written by the winners again, as Vincent is M.I.A. from the music scene, so we never hear his side. But then, isn’t that indicative of the veracity of KISS’s claims?

— Waitaminute! — “never listens” “embarrasses you with other people” “ethics questionable” “one of the most difficult people I’ve ever met in my life” — Vinnie IS my ex-chick! But his name was Jennifer back then… So uh, Jen, if you’re reading this, look, I love your guitarwork on Creatures and Lick It Up, but that doesn’t mean you can keep texting me every two months. Like the kabuki makeup, like Paul Stanley and Donna Dixon, like your stint with KISS – it’s OVER… 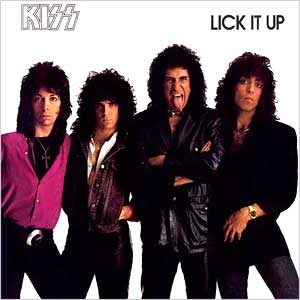 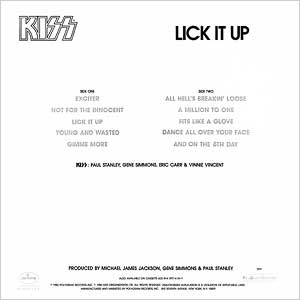