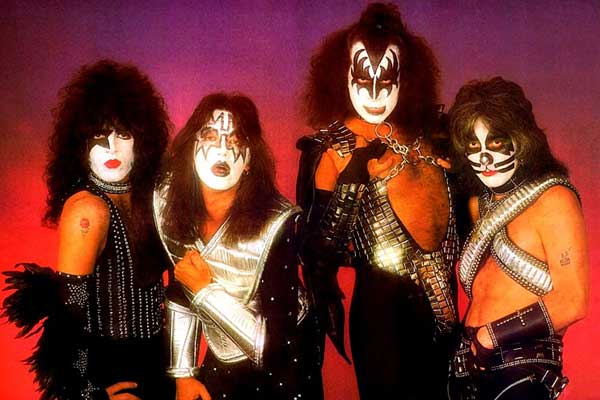 KISS 1977: If ever there was a Classic KISS look that adorned bedroom walls – this was it!

Capturing Lightning in a Love Gun.

ove Gun is the 6th KISS studio album – to date selling over 4 million copies – and the last of the legendary “first six albums”. These are the renowned KISS albums that, if used correctly by Mankind, could wipe out world hunger. These are the six albums that, if wielded by sane and intelligent men, could stop world wars. These are the six that Neil DeGrasse Tyson would send into outer space on Voyager 3 to meet extraterrestrial aliens. And they are here on Earth for our civilization to use. All these albums are yours, except Europa. Attempt no landing there. Use them together. Use them in peace…

But humans are an ignorant species and heeded not the computerly advice of HAL. So as much as these seminal First Six Albums are the classic six, the furious six, the six-six-six of KISS-tory, they also mark the end of an era…

Love Gun is the last KISS album where all four original members were in the recording studio at the same time, where they all played on all the songs, and where they all provided lead vocals. The album was simultaneously the peak of KISS and the height of the original lineup’s dysfunction. Though they were superheroes to the world at large, within the KISS camp, psyches and contractual obligations were fraying. According to founders Paul Stanley and Gene Simmons, the problems were apparent much earlier (which is astounding, considering how they presented such a unified force to the world in touring and albums): Peter Criss and Ace Frehley were not altogether together, both of them not only partaking of drugs and drink in ruinous amounts that stultified the KISS forward momentum, but also acting the nutcase in their own inimitable ways.

After reading all the biographies and hearing all the apocryphal gossip and digesting all the facts, we should base our conclusions on the eating of the pudding. As in: Look at the respective career trajectories of these four men and judge for yourself who’s telling truths and who’s whining over mistreatment and lies. We’ll ruminate on these “breakup” issues further down the discography, but consider for now, after Peter Criss was ousted from the band, he disappeared from sight and sound. A man in his position – literally coming out of the biggest band in the world (after Dynasty 1979) – couldn’t get a management team around him to continue even a basic music career? Even coke-addled Ace Frehley (quitting during the 1981 Elder period) was able to muster the energy to release solo albums (which were actually stellar). Which means Criss was less organized than a junkie! 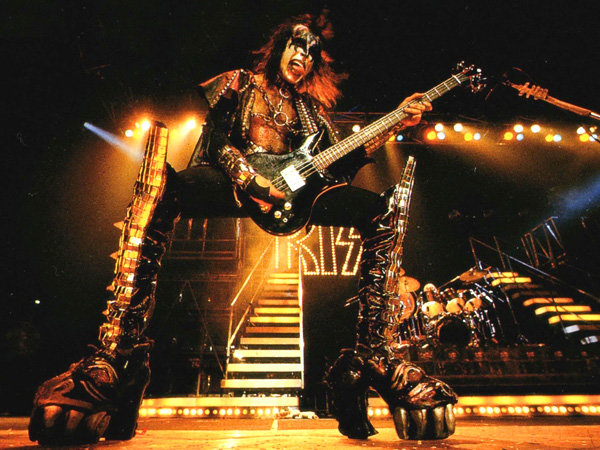 The stairs, the logo, the blood, the boots, the bat-demon – iconic overload.

Following in the hard rocking footsteps of its predecessor Rock And Roll Over, Love Gun retains that same solid production by Eddie Kramer, not too plastic (Hotter Than Hell) and not too bombastic (Destroyer); thick guitar tones, solid drum sounds (exemplified on songs like Hooligan and the title track, Love Gun).

Released at the same time as the KISS comicbook, Marvel Super Special #1: KISS, and with a dynamic cover painting once again by Destroyer Ken Kelly.

And all performed on that iconic Love Gun stage.

Why only a 7 rating? The three songs that bring this collection down are, in no particular order, Christine Sixteen, (thumping piano underscoring scratchy guitars in a tribute to pedophilia), Got Love For Sale (tuneless filler by Simmons) and Then She Kissed Me (Paul’s pointless cover of The Crystals’ 1963 Then He Kissed Me, co-written by Phil Spector).

I Stole Your Love. Admittedly influenced by Deep Purple’s Burn, Stanley ignites a driving riff, which would serve to open their shows on the Love Gun tour – on the iconic Love Gun stage! – descending in their moving platforms, or stepping down the lighted staircase to the dry ice and the wet crowd below. 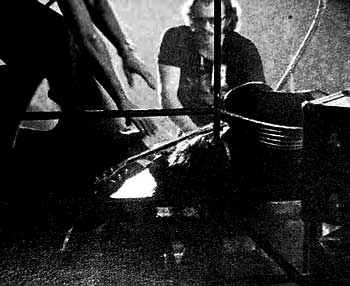 Ace Frehley – grounded! For being ungrounded.

Shock Me. Previously writing songs and handing them off to other band members to sing, now Ace Frehley writes this thick dirty riff, and follows up by self-consciously fronting the mic with his bland voice, in his first lead vocal performance. All it took was getting electrocuted and almost killed.

December 12, 1976: During the Rock and Roll Over tour in Florida, Frehley touched the railing of the staircase (on the iconic Love Gun stage!) and suffered an electric shock, for not being grounded! After a 30 minute break, he completed the show.

Besides the inspiration for Shock Me, another development came from this incident – wireless guitars! KISS was one of the first bands to embrace this tech – and were accused by disgruntled fans of using backing tapes instead of playing their instruments! What did I say about this ignorant species? Those same uninformed morons who thought to raise their voices in protest before knowing all the facts have become the Ace-and-Peter junkies of today, whining and complaining about the makeup and the KISS lineup and Gene-and-Paul’s avarice and blah blah without any thought to facts. If Simmons could trademark Whining About KISS, he wouldn’t just be a multi-millionaire, he’d be a multi-billionaire.

A cardboard Love Gun was included as an insert.

Almost Human. Gene writes this album’s God Of Thunder, where he uses his characteristic demon growl. “The moon is out / I think I’m gonna change…”

As if to put a seal on this second phase of their career, the next KISS release would be Alive II (Oct 1977, showcasing their second trilogy of albums, as Alive! had showcased the first trilogy). Then the compilation album Double Platinum (Apr 1978). Five months later, the four Solo Albums (Sep 1978). One month later, the mincing movie KISS MEETS THE PHANTOM OF THE PARK (Oct 1978). Even whilst it seemed like KISS were saturating the market and conquering the universe, within the KISS camp an implosion was imminent, and outside the KISS camp, the world had become an iceberg and KISS was the Titanic…

Hold onto your facepaint, KISS fans, EVERYTHING is about to go Fractured Mirror… 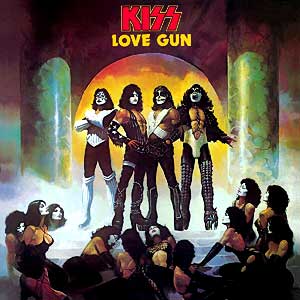 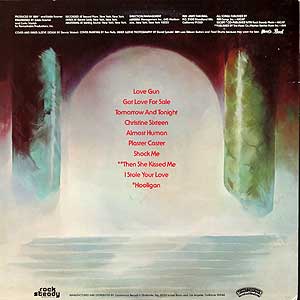