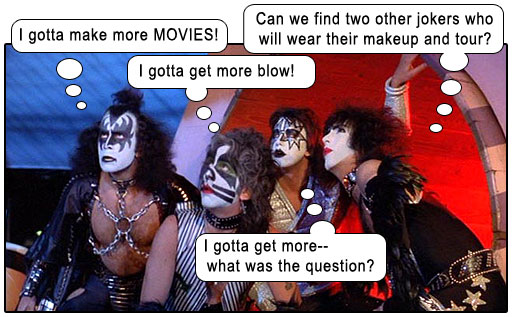 KISS MEETS THE PHANTOM OF THE PARK is such an abysmal TV movie that KISS themselves forbad anyone in their presence to mention it. (I think only Music From “The Elder” would eventually become more verboten in the KISS sanctum.) Subpar on every level, it’s like watching a GAMERA movie.

A camp horror-comedy musical actioner, KISS play the comicbook versions of themselves, each with superpowers (Ace the Spaceman teleports and shoots lasers from his fingers, Paul the Starchild reads minds and shoots lasers from his star-eye, Gene the Demon breathes fire and has superhuman strength, and Peter the Catman complains in a Brooklyn accent that isn’t his). They save an amusement park from closing down with flamboyant rock and roll performances. While battling albino robot-apes, classic cinema monsters (Frankenstein’s monster, Dracula, werewolf) and cyborg clones of themselves. But everyone just remembers KISS acting. The horror… the horror…

Abner Devereaux (Anthony Zerbe, the Alan Rickman of his day) is KISS’s nemesis, fired as the technological genius of the amusement park, his animatronic creations falling out of favor with audiences and the park owner, replaced by rock and roll in the form of KISS. So Abner vows vengeance on KISS and KISS-manity, by capturing the real KISS and sending his KISS androids out to perform in their stead, with dumb replacement lyrics to spur the audience to “rip and destroy” the park.

What’s much more interesting than the movie are the myriad tales around the production; some apocryphal, some documented, some jaw-dropping, all becoming woven into the fabric of the legend that is KISS: 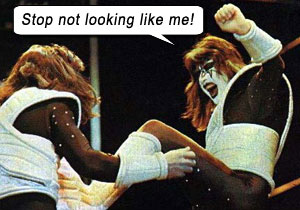 Yes, it stinks in hindsight, but examine the context in which KISS MEETS THE PHANTOM OF THE PARK was released: As some older fans will note, it was a different time and space – no YouTube, no facebook, no Flixter, no “social media” of any kind; if you owned your favorite band’s albums and a few posters, that didn’t necessarily mean you had seen them live onstage, that didn’t even mean you had heard them speak in their usual voices or seen them move as living figures. When KISS MEETS THE PHANTOM OF THE PARK premiered on American TV in March 1978, it wasn’t a case of TiVo-ing it, or waiting for the encore presentation directly after its premiere on cable; if you missed it, you missed KISS. You missed THE event of the era, on the only “social media” existent – television.

Keep in mind, this movie premiered after the fourth KISS album Alive! had broken quadruple platinum, and KISS had churned out three more platinum albums after it. Though the band was secretly internally disintegrating, their fan base was at its mightiest.

And that is still this movie’s draw, all these years on, for same-but-different reasons. Back then, you saw them maybe a few times on TV and in concert twice if you were allowed to go; now, with the saturation of old, fat hawker Gene and scratchy-voiced painter Paul, it’s a blast to see them in their youth (late 20s) and in their prime, slim and energetic, with their makeup and costumes as we remember from the posters on our bedroom walls…

Jeff Gray and Jeff Scott, two commentators on Watchin’ You, Episode 3 make excellent points without being apologists. Paraphrasing: “At the time, at the age of most of their audience, they had not yet even seen any good cinema, so there was nothing to measure it by.” “You weren’t looking at [the movie] with a critical eye.”

So we end up weighing primal enjoyment against technical quality, weighing adept rock and roll against inept moviemaking, weighing future legends against themselves as rising stars, and wondering exactly how good or bad this movie really is. Maybe we should leave that to KISStory…

imdb
Word Count: 1,400      No. 1,059
“Rock And Roll All Night” ♦ KISS
(opening credits)
This credit sequence is specifically to remind audiences who/what they came to see, for KISS would not appear until the second act, although their presence is continually felt throughout the first. It’s a good, powerful sequence purely for the presence of KISS and their anthem. Teetering on the edge of so-bad-it’s-good.