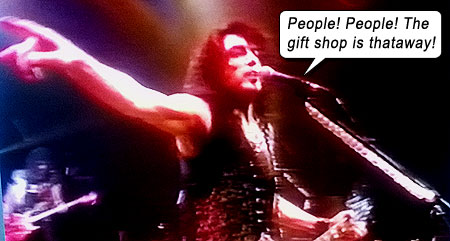 KISS MY ASS is the 1994 home video release in conjunction with the 1994 album of the same name (Kiss My Ass: Classic Kiss Regrooved), but is a totally different rock animal.

Unlike the album, it ain’t a bunch of popular bands doing KISS covers. It’s the Real Thing. 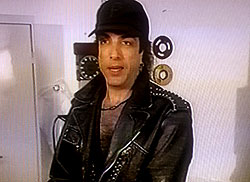 Paul Stanley in the real world. 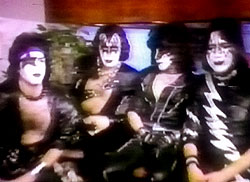 On their 20th anniversary, KISS release another collection of vintage performances and golden nuggets. (Lineup in 1994: Paul Stanley, Gene Simmons, Bruce Kulick and Eric Singer.) Depending on what you were expecting, this video could very well be a total gyp (if you expected to see all those groups who performed the KISS covers on the album). Yes, that album is spoken of unabashedly in some of the interview segments, and we do see two of the artists involved performing their covers (Anthrax, She, and Gin Blossoms, Christine Sixteen) but the rest of it is all KISS, Movie Maniacs. Deal with it.

Take into account the era KISS MY ASS is released in: no YouTube, no social media. To see these rare videos, you had to buy this VHS cassette. In that sense, it is another remarkable collection of KISS memorabilia.

By this stage, KISS had attained a groove of releasing vintage footage on home videos every year, starting with X-TREME CLOSE-UP (1992), followed by KONFIDENTIAL (1993), followed by KISS MY ASS, and I’m sure they would have continued doing so had The Reunion never happened in 1996. Even so, they’ve kept the video releases (which turned into DVDs) pretty constant, but with a different tone, due to fate stepping in and kicking their career in the ass.

The thing I especially like about these live performances is that they are truly undoctored: raw thin audio, slipups on vocals, breaking voices, out-of-tune backing vocals, messy playing, and hardly any crowd noise. Yet tight as a live band of energetic, young guys could be. The visuals were edited well, so I’m wondering why and how the audio is so haphazard. By 1994, KISS were pretty secure in their legacy and largesse, so they didn’t seem to give a damn that these live performances would do injustice to any other band. 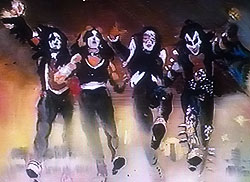 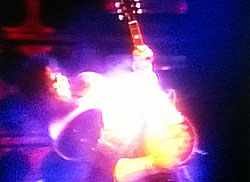 Ace Frehley in his own world.

Love the rare tracks: Move On, C’Mon And Love Me, Take Me (rehearsal), Makin Love, Hooligan, even a scintillating solo from Ace Frehley, back when he cared. Again, all live stage performances, no “promotional videos” (except for “I” from The Elder, and I Love It Loud.).

Interspersed with each clip are the nuggets: fantastic little segments that feature founding members Simmons and Stanley jawing about KISS esoterica: Stanley showing pics of the band sans makeup during the makeup days (he and original drummer Criss, two young guys in jeans: “Our first tour of Europe; everyone was still wondering what we looked like”); Gene showing us the original Destroyer album artwork (by Ken Kelly); TV commercials for the KISS dolls, albums, tours and merch; Casey Kasem interviewing the band during The Elder period; the handwritten lyrics to a song called Drive Me Wild, which would become – you guessed it, KISS-ologist – Rock And Roll All Nite…  and we’ve all heard that story about the ad that snared Ace: “Wanted: Lead Guitarist with flash and balls” (which actually read: “flash and ability”) – here, Paul shows us the receipt for that ad! 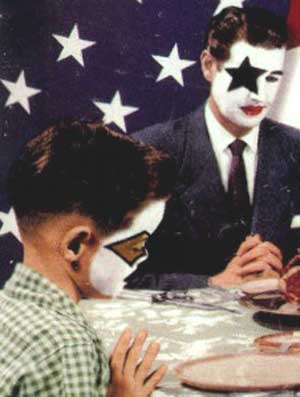 “Kiss My Ass” cover, featuring Paul’s makeup on the father – and his old “bandit” makeup on the young boy, instead of Ace’s makeup.

A short tribute to a fallen member: drummer Eric Carr, claimed by cancer in 1992. And the now-veteran guitarist Bruce Kulick and newest member, drummer Eric Singer, adding their two cents of nuggets.

Simmons and Stanley are naturally very proud of their tome, KISSTORY, a 10-inch high book, weighing in at nearly 9 pounds, outlining the definitive history of the band, and retailing at hundreds of dollars. A lot of the pics and nuggets featured in this video are from that book.

No one speaks of the story behind the cover of Kiss My Ass (showing the old Paul Stanley “bandit” makeup on one of the family members instead of Ace Frehley’s “spaceman” makeup). Seems Frehley’s management company didn’t allow KISS the use of his makeup design… Of course, that legal wrangling is behind them now, with the KISS Organization presumably pulverizing that management company and its stupid little edicts, because – Tommy Thayer.

Love Gun, live in Detroit, 1992. The Revenge tour. KISS were at their peak musically with Kulick and Singer, with Simmons and Stanley’s voices in top gear, and also looked their “toughest” since their early makeup days.

Next stop: The Reunion. And the rollercoaster ride starts all over again. I love it! And for any who would begrudge this hard-working band their success, well, you can…