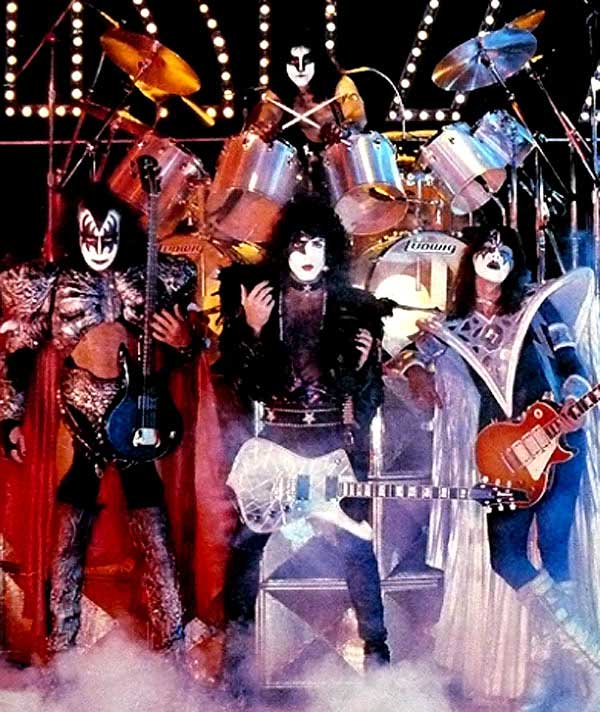 nmasked should have been called Guilty Pleasure.

With its sanitized disco pop and bubblegum bop, Unmasked was a calculated sequel to 1979’s Dynasty. But someone calculated wrong. Because 1 (album of shit) + 1 (album of shit) = more minus-fans than plus-fans. It was the first album since 1975’s Dressed To Kill that would stall at Gold status, rather than rise to platinum or beyond (as had been the convention of KISS albums since 1975’s Alive!).

It was big in Norway, where math was optional.

The good songs were eminently catchy ditties, even though they were lighter than KISS’s usual hard rock candy, and the bad songs were just stinkers. As soon as the opener whipped in, Is That You?, we could hear the problem. They’d taken everything that was wrong with Dynasty – and multiplied it by Donna Summer. The hall reverb and slap delays were out of control! Paul Stanley, his usual masculine tenor hardly recognizable with all the coquettish squeals and mmm’s and oowoah’s, wails, “Write on my mirror with your lipstick / Much too vain, got scatterbrains…” I love that line and its delivery, but it’s a stylistic departure many KISS fans were not ready for. He’d used more falsetto than usual in Dynasty, but never stepped this far into womanhood.

Then – an even GAYER song! Shandi. Producer Vini Poncia co-writes with Stanley to produce a fantastically-constructed ballad that sounds like a summer jazz festival meets a disco girl group from the 70s. With guitars that resemble synthesizers and synthesizers that resemble crappy violins, Shandi would produce another soft-rock hit for KISS. All brought to you by The Underrated Mr. Paul. (Wikipedia: “Although all four band members appear in the video, only Paul Stanley was involved in the recording. Anton Fig plays drums, KISS roadie Tom Harper plays bass, and songwriter Holly Knight plays keyboards, while Stanley sings lead and plays all guitars.”) Stanley openly admits his inspiration for Shandi is The Hollies’ version of Bruce Springsteen’s 4th Of July, Asbury Park (Sandy).

The Shandi video shoot would be the last time the band would see drummer Peter Criss until the KISS Unplugged era. In keeping with the album title and its cover cartoon, there’s a great twist at the end of the video.

Followed by the best song on the album, Ace Frehley’s hit single Talk To Me, an open-G tuning rocker that exemplifies simplicity producing stunning, catchy results. Frehley’s confidence as a lead vocalist must have been soaring by now, as Talk To Me was one of three singles, none of which featured Gene on lead. Matter of fact, the third-best and fourth-best songs on the album are also Ace’s: Two Sides Of The Coin and Torpedo Girl (and dig that syncopated Anton Fig opening drum pattern!). These kinds of hard facts/contention make KISS diehards wonder what the band might have been had Simmons and Stanley deferred more to Frehley’s rock judgment…

Stanley’s Tomorrow is the second-best song on the album (also a single), and has a touch of that classic Dressed To Kill vibe, but with funny little tootling things and rubbery guitars instead of Les Paul crunch. 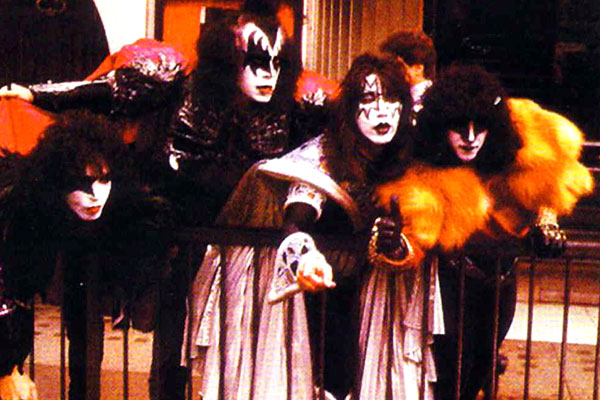 Touring Unmasked in France. Fig in the Studio, Cat on the Cover, Fox on the Run.
On July 25, 1980, Eric Carr was introduced to the world as the new KISS drummer, The Fox,
at the Palladium in New York City.

Two Sides Of The Coin, another open-G, breezy Frehley rocker with a catchy chorus – and a neck-snapping syncopated drumming interlude that made all of us musicians, no matter how great a KISS fan we professed to be, look sideways at each other and say, “That ain’t Peter Criss…”

It was drummer Anton Fig again, who also performed 90% of the drums on their last album Dynasty. Here – 100%. There are NO Peter Criss songs, credits or drum tracks on this album. The only sightings of The Cat are on the cover cartoon, and his mimed drumming performance in the Shandi video.

KISS continued the lie they propagated with Dynasty – that it was still Gene, Paul, Ace and Peter (IMPLYING the hell out of Peter still being in the band), yet in all Unmasked promo appearances and performances, for TV, festivals, interviews, etc. there was a foxy new boy in Criss’ stead – powerhouse drummer and all-round baby-faced, big-haired nice guy, Paul Charles Caravello aka Eric Carr.

Speaking of inconsequential, Gene Simmons is meant to be a Demon – not a Ghost. His offerings on Unmasked are so watery, they are almost see-through. Naked City, She’s So European, and You’re All That I Want, which features lyrics so banal I almost bought a Shakin’ Stevens record: “And if you leave me, don’t say goodbye / ‘Cause you’re all I need to get by…” What the–?! Does it even make sense that not saying goodbye has any bearing on the fact that she’s all he needs to get by? And why is he telling her this if she’s already gone? Oh, that’s right – he doesn’t know she’s gone because she didn’t say goodbye, as per his request. And rhyming “bye” with “by”?! Did Gene’s gardener write this? Now no one said these songs weren’t enjoyable guilties, but so lacking in demon-depth that Barry Manilow might have put on Gene’s stack heels and no one would’ve noticed. Or Gene’s gardener.

frehley’s side of the coin 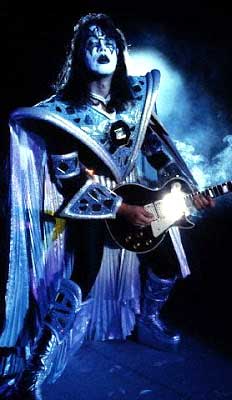 Tangled up in electric blue

Over the course of this album and the next (The Elder), Ace Frehley would meander out of the KISS fold. He lost the gig/ resigned/ was fired for myriad reasons. No matter what you read or hear, it was never as cut and dried as KISS or Frehley make it out to be. One word: CONTRACTS.

Yes, Frehley was over-indulging in drugs and drink, but it was hardly just that, because he was always doing that; no, the split came about gradually due to a combination of divergent musical visions, disagreeable business decisions, losing his confidant Criss, thereby losing his vote (now it would always be him against Stanley and Simmons), being unreliable, tardy, lazy, not keeping up his chops (check YouTube – if I’m lyin’ I’m dyin’), and then ADDING the drugs and drink on top of all that.

Frehley grew apart from the band’s marketing savvy. Stanley’s and Simmons’s ethos was to follow the money – Adapt Improvise Overcome. If disco was big – start dancing; if hair was big – start spraying, if marketing was big, start hawking… Frehley, great guitarist though he was, wanted none of that; he just wanted to play rock and roll and stay true to his roots, which is commendable. But it doesn’t make for a good working relationship with an organization that needs you to cooperate with their international strategies. Frehley simply lost interest in being in the Biggest Band In The World. However, he was in a legally-binding business relationship with the KISS Organization, with contractual obligations to fulfill, so he couldn’t just disappear cleanly – he had to make video appearances, live shows, interviews, provide his visage for promo, etc. before he could end the relationship without being sued. In other words, he was wearing his makeup under duress. He didn’t WANT to be the spaceman any more, yet he had to grin and bear it because his contract said so.

Stanley has a point against all those numbnuts purists who keep maintaining Eric Singer and Tommy Thayer are “impostors.” Those who don’t wish to be in the band and yet wore the makeup for financial reasons or contractual obligations – are the ACTUAL IMPOSTORS! Frehley and Criss came to HATE playing with the band, therefore, were disdainful of the makeup and all it stood for, with Criss disrespecting the KISS legacy so avidly he would actively ruin shows, whilst Thayer and Singer PROUDLY wear the makeup and love their jobs and perform them to perfection every night without giving Stanley and Simmons agita. Hey KISS-LOONIES, who exactly are the impostors?

In the final telling, the impostors are the unmasked. 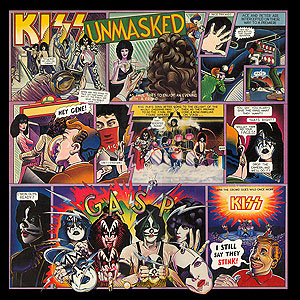 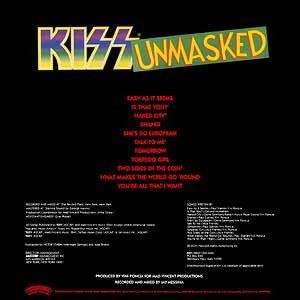