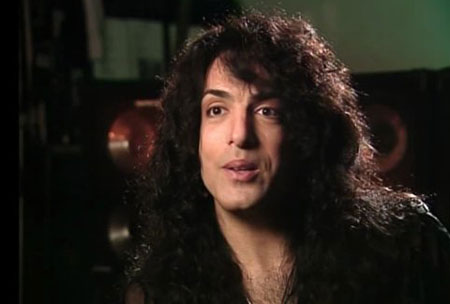 Shit’s about ta get RAYL!

Released shortly after the release of their heavy rock gem Revenge (May 1992), when KISS looked their absolute leathür hardest, X-TREME reflects that stance: the talking head segments are staged with a grit that KISS have never exhibited before; Gene’s hair/semi-wig has never looked so cool. Actually cool, not the strange roadkill it resembles in 2014. Under Paul’s fashion shirt, he’s wearing a “fuck” t-shirt, also with great hair/weave down to his ass. Looking back from 2014, both are arguably at the peak of their powers at this point in their career: good looks, fine voice, songwriting skills. Time crushes even the best of us.

Sometimes we forget that not everyone knows KISS as intimately as we do (poor bastards). X-TREME CLOSE-UP is a definitive telling of the tale, by founding members Gene Simmons and Paul Stanley – all the old anecdotes that we’ve heard a thousand times, compacted together concisely and in chrono order. Everything, from the first rehearsals, the makeup, the Alive! breakthrough, the rise to fame, the blood in the comicbook, the disco discs, the lean 80s, dropping the makeup, Gene going Hollywood – even KISS MEETS THE PHANTOM OF THE PARK! No shame in speaking of fired members Ace Frehley and Peter Criss, no lies in revealing Bob Kulick’s involvement, no holds barred in recounting Vinnie Vincent as knucklehead, how Mark St. John just got sick, how Eric Carr got sick and died (a very tragic segment), and how the current lineup came to be (at that point in Kisstory: Simmons, Stanley, Bruce Kulick and Eric Singer).

And all interjected with excerpts of vintage live and recorded videos – primo material – with a smattering of newer, then-current videos. It’s a smorgasbord of content, shot through with some of the best KISS biographical information ever committed to video. Gene and Paul even let current members Kulick and Singer talk a little with their mouths and use their own words and everything. 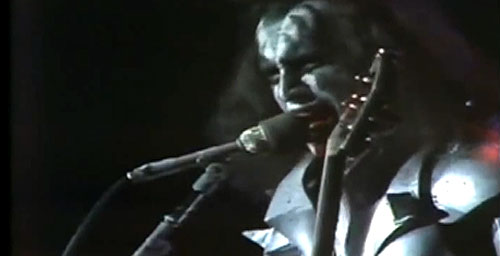 ”Have I mated yet tonight?… Form an orderly line, no pushing at the back..”

The end credits are touching: no matter what anyone might think of Gene’s and Paul’s feelings/contractual obligations to past members. Each member of KISS (past and present) is credited with his own visual and title card.

It’s powerful, nostalgic, informative, arguably the first honest video document pulling back the curtain on one of the world’s foremost rock bands. If history is written by the winners, then Gene and Paul deserve to tell it any way they want to.