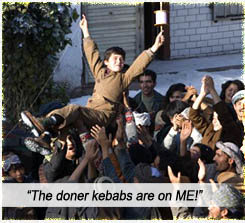 I know I’ll get lambasted for approaching this movie from a less-than-arty-farty angle, but just because a film is in a foreign language (Dari with English subtitles), and thematically covers honor, justice, manhood, and involves child-rape, terrorism and kite-flying in the Middle East – doesn’t mean it should automatically be discussed in hushed, honorary whispers.

THE KITE RUNNER is lauded as a movie about redemption. It is not. It is a movie about being a wimp. And how this wimp reconciles himself to being one. I guess that’s what this lily-livered society is now calling “redemption”.

Screenplayed by David Benioff (from a novel by Khaled Hosseini) and directed by Marc Foster (MONSTER’S BALL, 2001), THE KITE RUNNER is a well-made and heart-rending tale that will make you question everything you know about honor and manhood – but not in a heroic sense. We think about manhood because the Wimp remains a Wimp throughout his life; due to the fact he admits to himself he is a Wimp, this is regarded as “honorable” (much like admitting you’re an alcoholic has somehow become honorable). Wimp tries to absolve his past sins of wimpique by rescuing his current nephew from a fate worse than death. This only serves to prove him more of a wimp, as the nephew has to save him saving him.

Amir is a killer kite-flyer, whose kite duels are legendary. Hassan is of a lower caste, a resident servant to Amir, but also his best friend and dynamite “kite runner” – the person who chases down kites when they are cut loose. At one point, Hassan shouts his devotion to Amir by declaring how many times he would chase down a kite, “A thousand times for you!”

This is not a special effects movie per se, so we take for granted some of the exceptional “special effects” like the aging makeup and kite-flying sequences. Also, the culture and surroundings of 1978 Kabul are so authentic you can smell the dusty alleys and sun-soaked stone. The movie itself is exceptionally well-made. It is the insidious message of faux-redemption that grates on the sensibilities.

One day, Amir witnesses Hassan being raped by the neighborhood bully, Assef (Elham Ehsas) – and slinks away. Time to search your colons and truthfully admit what YOU might have done, confronted with three bigger, tougher enemies holding down your best mate and ripping his sphincter a new asshole. I know *I* would have waded in there like a psychopath, kicking and screaming, even if unable to stop the attack, doing all I could to get them off my mate at any cost. And modern society has attained such a gutless, mollycoddling timbre that it sounds like I’M unbalanced in admitting I would have gone crazy to save a mate.

People only relate to characters onscreen because they see something of themselves in the character. So with the high acclaim this film receives from all circles, does that mean most people would slink away? What irks me is that this movie gives cowards a “hero” figure to relate to.

After feeling like a dishrag for slinking away, Amir goes deeper into Yellow Hell when he realizes Hassan’s presence in his home represents the embodiment of his Yellowness, so he plots to rid his household of Hassan. These scenes tear at our guts, as we see one unfortunate boy’s life destroyed by the hateful machinations of another boy, whose hatred is really directed at himself.

The movie’s real laudable aspects are its tangled sub-plots and sub-themes of theft, familial bonds and forthrightness, and the scene in which Baba forgives Hassan for stealing speaks on many levels.

Hassan is ultimately excised from Amir’s life tragically. They will never see each other again.

The movie floats some historical events, such as the Russians invading Afghanistan and the emergence of the Taliban, which forces Baba to immigrate with Amir to America.

While Baba and Amir are cattled in a refugee truck crossing the border, a Russian soldier at a checkpoint demands payment in the form of a man’s wife. Baba stands up for the wife – not her husband, who remains seated. Now how does the husband live out the rest of his life with that nagging shrike forever calling up this incident? “…and why didn’t you stand up for me in the back of that truck, you coward?” How does HE find redemption? Face it, there is none. Either you stand up when you need to, or you will forever be eaten by that worm of guilt.

So too with Amir. When he grows to meek manhood in America, he is actor Khalid Abdalla. He somehow grabs a gonad to marry Soraya (Atossa Leoni) and ekes out a meager low-class American life (like the 95% of America who are not oil barons, political criminals and pharmaceutical congloms).

Baba reveals to Amir that Hassan was actually his brother from another mother. As comedic as this sounds, I think that was the actual subtitle translation. After Baba dies (of old age, a proud Afghan), Amir gets The Call From Home. He returns to Afghanistan to discover Hassan is dead. One of the most powerful moments in the film is when Amir says the words out loud, “He was my brother.”

Hassan left a son, who is lost amidst the child-selling agencies of Afghanistan. Amir sees a “way to be good again” – rescue the boy.

It all gets very unintentionally Python-esque. When Amir must infiltrate Pakistan and the Taliban, he sports a fake beard (purchased from the women at THE LIFE OF BRIAN stoning); he passes by a man actually “selling his leg” (like the tradesman in JABBERWOCKY). And he attends a stoning in that fake beard!

He finds his nephew sold to a Taliban official who is – wait for it! – Assef the bully all grown up. Karma on crack! Being the neighborhood bully as a boy, is that the career path to joining the Taliban as an adult? Again – unintentionally – this scene is a laugh-riot, because Assef tells Amir he can have the boy for the price of… a good ass-kicking! As Assef takes Amir to the cleaners, we imagine Amir’s years of heartsickness in crawling away from Hassan’s rape would have given him the nutsack to bite back, but no, he takes it like a real ‘90’s man, crying and bleeding. It is up to the nephew to slingshot Assef and drag his uncle out by the soft parts.

And this is where the film’s message becomes ambiguous. Amir takes the boy in as some sort of atonement for his guilt in ruining his half-brother’s life. But can there ever be atonement for that? Once you go chickenshit in watching your friend get raped, then destroy him further for your own guilt, can you ever atone? You can take in a hundred kids, you can start an Orphanarium, but will it ever dispel that worm in your guts? Does that worm ever sleep or take a vacation? Or does it birth baby worms to gnaw at your innards forever?

In the final scene, in a park in modern-day San Francisco, Amir tries to reach his closed-off nephew, who has seen and been victim to such atrocities we could never imagine. He takes him kite-flying, letting him hold the string and maneuver. When the kite cuts loose, Amir runs after it, shouting to his nephew the words of his childhood friend, “A thousand times for you!”

Wimp, even a MILLION times won’t be enough…