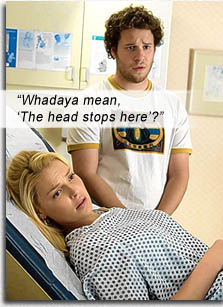 One could say KNOCKED UP is writer-director Judd Apatow’s baby – and as malformed as the rest of his hobgoblin brood.

Seth Rogen is Ben, a shiftless layabout (rooming with a menagerie of oafs: Jason Segel, Jay Baruchel, Jonah Hill, Martin Starr) who somehow manages to knock up porn-sexy career woman, Alison (Katherine Heigl), on a girls’ night out and must then deal with the consequences.

And consequences there are. KNOCKED UP separates itself from the Chick Flick pack – like an embryo detaching itself from a uterine wall – by showing us what happens *after* the doughy guy gets the hot girl. Not just the Credits… mundanity, discomfort, stagnation…

Still, Seth Rogen makes the drudgery surprisingly bearable (“Do you want to do it doggie style?” “You’re not going to fuck me like a dog.” “It’s doggie style. It’s just the style. We don’t have to go outside or anything”).

KNOCKED UP is not your average “romantic comedy” with the mandatory maudlin marriage message. It is laser focused on the comedy – let’s face it, the “romance” is pretty much over and done once she gets “knocked up” – with unexpected laughs at every turn, great galloping guffaws from stupid situations (heralding Eric Bana as the resurrector of Jewish Pride in MUNICH; The Boys pretending to blow each other while Ben is on the phone to Alison; the worried summation of Ben’s dancing skills, “He’s doing the dice thing too much!”); lovably disheveled characters, snappy dialog and earthly woes (middle age, kids, sex becoming stale…).

And though the immaturity of Ben and his roomies is quite apparent (from their asinine, amorphous get-rich-quick scheme of launching a naked celebrity website – until they discover Mr. Skin), the movie itself becomes very responsible with its exploration of pregnancy from every angle: abortion, forced marriage, a relationship based on an accident, etc. It rationalizes too hard on why this situation cannot be resolved with a quick “I won’t say it but it rhymes with shmashmortion.” And that may be a stretch (er – pun intended?), but at least KNOCKED UP brushes aside that hideous chick flick fantasy that marriage is some sanctimonious institution that everyone should aim towards, where all happiness begins and all loneliness ends.

Here, it’s a pretty horrible state of duplicity, with uber-ad-libber Paul Rudd sneaking out on wife Leslie Mann so much, she thinks he is cheating on her, only to find he is sneaking out to play fantasy baseball. As Bill Maher says, “The sexiest woman in the world – somebody’s sick of fucking her!”

As for how a smokin’ tamale like Alison could ever fall for a jobless, unambitious slob like Ben – no matter how much they hang together for support, or how deeply he cares for her or how hard he makes her laugh over the course of their pregnancy-courtship – well, that’s the real fantasy…