Not Knowing what’s coming next.

Astrophysicist John Koestler (Nicolas Cage) discovers a page of handwritten numbers from a 50-year-old time-capsule opened at his son’s school, figuring out that they are dates when disasters occurred. Some of the dates have yet to arrive. 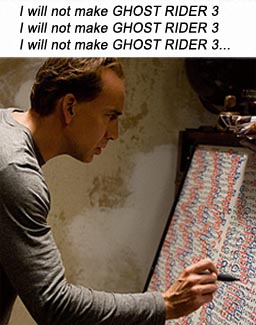 Shades of numerology, CONTACT, Revelations, ANCIENT ALIENS, Chariots Of The Gods?, writers Ryne Douglas Pearson, Juliet Snowden and Stiles White, with director Alex Proyas (I, ROBOT) have layered all these entertaining diversions into KNOWING, a film that succeeds at being what all those “religions” and “myths” and “legends” are in reality – an entertaining diversion.

The best aspect of KNOWING is that it never blatantly beats us over the head with pseudo-cosmic theory, there is no advocacy for any theory in particular; rather, movie intertwines numerous strands of alien-life memes, biblical allusions and scientific methodology – and the best damn plane crash scene you will see in years. (Matter of fact, you could call KNOWING a disaster movie for the excellent disaster scenes – subway train crash, cities annihilated – if it weren’t for the fact that the overarching plot is one of redemption, for the human race itself.)

Koestler’s son (Chandler Canterbury) tells his father he is hearing voices and seeing strangers, and is found scribbling numbers as if “auto-writing,” which leads to an eerie mystery about the young girl who originally scrawled the page of numbers 50 years ago, and a fearful premonition about the end of life on the planet – not in the prosaic ways it is usually handled, but with a nod to solar science. One word: Krypton.

Rose Byrne is excellent as Diana, a distraught mother troubled over her daughter also hearing voices and seeing strangers. Diana inadvertently teams with Koester in trying to save both their kids from the impending natural disaster. The beauty of these two details is:
a) the story does not stoop to romantically entangling these two adults, and we do not even miss this usually-perfunctory hookup that most movies would have thrown in gratuitously;
b) the impending disaster cannot be escaped. Read that again: there is no escape for the human race! Oh joyous day! At last, a film brave enough to show humanity being threatened with extinction – and actually going through with it!

There is a coda of hope, though, which could be construed in as many ways as there are Stupid Religions on Earth. Firstly, the hope coda may be construed as the threat of extinction NOT being followed through. But look at it this way: extinction is a term applied to a species that has not adapted to its environment and has therefore been wiped out by a better-adapted form. In the movie, the only humans who could communicate mentally with the aliens/angels/saviors/call-them-what-you-will were the CHILDREN; they were a more evolved form of humanity. Thus, one form of human was completely extinguished to make way for another, with better survival capabilities. Natural selection/extinction in action.

Secondly, there is so much King James Biblical allusion in these final scenes that Christians might be inclined to high-five the producers for giving their Stupid Religion primacy. But I don’t see it that way, because the reveals and allusions are committed with such a steady hand – no voiceovers to explain the wondrous sights, no annoying expository explanations from one character to another, nothing dwelled on to escalate import and thankfully no goddam religious nut characters falling to their knees and giving a high-five to their Stupid Religion. No preaching, no bombast, just strange, inexplicable beings saving a contingent of organisms for their own unknown agenda. The fact that the beings fade in and out of resembling Old World depictions of angels is again for anyone to take in any way. We find ourselves pondering, Might such technology have been mistaken for divine intervention? (An argument admittedly postulated by the Ancient Astronaut theorists, until they go overboard and accuse Hitler and Da Vinci of being in league with little grey men from the Pleiades star cluster.) 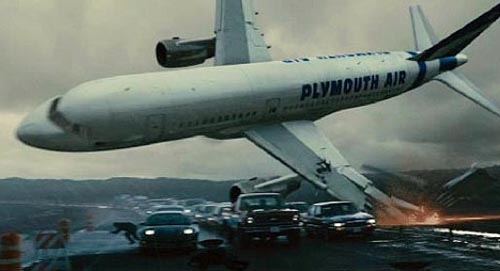 ”Thank you for flying Plymouth Air, ladies and gentlemen. Out the left window you will see a sturdy ’92 Chevy pickup which comes equipped with 4-wheel drive, GPS, and will soon be on sale with some body damage.”

Cage’s Koestler is a desperate man, yet not stupid, and he accepts his fate when the point of no return is breached; he innately senses what I outlined above – that there must be a reckoning for the older species and a rebirth of a newer one; that holding on white-knuckled to his outdated mortality is no way to save his child from the unforgiving forward momentum of evolution.

KNOWING is a supernatural mystery thriller ironically best appreciated by those with a Knowing of physical science, rather than by that credulous audience from whence these ideas sprung.