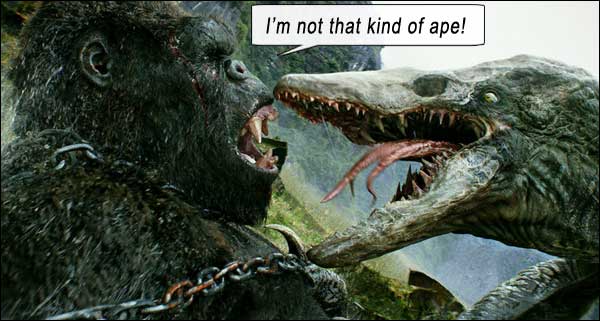 In a cold open, two pilots – an American and Japanese – crash-land on a deserted Pacific island. It is 1944. They try to kill each other, in a foot chase that leads to a mountain ledge. As they grapple, something… YUGE… rises from below. A gorilla! No, not just a gorilla – a GORIL-LIL-LIL-LIL-LA!

An American scientist leads a military expedition to an island discovered by satellite photos, to beat the Russians there and discover its secrets – and is confronted by that same gorilla, who goes ape on their helicopters. All the extras die. The next move is up to the scientist and the military. To kill or not to kill this ancient beast…

KONG: SKULL ISLAND is APOCALYPSE NOW meets GODZILLA. For a very marketable reason. Warner Bros. and Legendary Entertainment are even now planning the Daikaiju Match of the Century – Kong Vs Godzilla! For that to happen, they had to make the 50-foot Kong of the past 84 years more GORIL-LIL-LIL-LIL-LA. To face the modern 350-foot GODZILL-LIL-LIL-LIL-LA. Not only is the ape’s size amped up to 100 feet, its role is modified to be more of a rampaging beast, a creature that ruled the Earth before Man; it is played like it might not be an ape at all but just a giant carnivorous creature with a hint of blond ambition… The stage is set…

Jackson is Captain Insecure Dicksize, who, after his men are annihilated by Kong for invading Kong’s territory, obsesses over killing Kong. Like every American chickenhawk, he lays the blame of his troop’s death not on himself for invading, but on the party being invaded. “I know an enemy when I see it!” Uh, okay, but Kong is not your enemy, jarhead. YOU struck first, without warning, without permission. Movie shows us very explicitly that the only “monsters” on the island are the ones who arrived in Hueys. They even make Goodman’s scientist, Dr. Crackpot, a superficial monster whose parents were killed by Kong, which he regards as “something with no conscience, no reason.” Well, not really. The reason: you were encroaching on his territory.

Crackpot tells Dicksize his organization is after Massive Unidentified Terrestrial Organisms (MUTOs, which ties it to GODZILLA 2014, where the winged monsters were called MUTOs – a stupid name, because once you find them, and classify them – huzzah! Massive Identified Terrestrial Organisms.) “The Castle Bravo tests were not nuclear tests – they were trying to kill something.” (Almost the same dialogue in GODZILLA, describing the Bikini Atoll tests.) His token black assistant pipes up about his Hollow Earth Theory, which has turned out to be true. No one cares. Not even the black demo he’s here for. 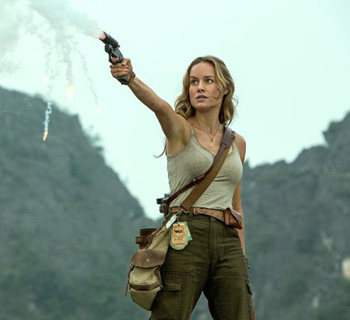 Crackpot wants evidence to take back to civilization. Shouldn’t the focus then, be more on T-shirt taking pics, rather than Dicksize’s vendetta? That’s when we realize even the filmmakers have lost the plot: When we see a graveyard filled with giant bones of dead apes (Kong’s parents), T-shirt says “I’ve taken enough pictures of mass graves to recognize one.” Yeah, well, how about taking a picture of THIS one? Because – evidence.

We see her snapping pics, but of all the wrong things. That picture of a giant footprint might be a tiny hamster’s without showing a canteen or person’s foot next to it for scale. Or how about this? At least all the male scientists back home can get a perfect idea of size if you place your D-cup rack next to it.

Hiddleston the tracker is introduced like Wolverine in a bar fight. Then we never see him use any skills again for the rest of the movie, except looking like Thor’s brother. Movie tries to flesh out his character with talk about his father in the RAF mounting an attack from which he never returned (but we’re just wondering when he’s going to mount an attack on T-shirt’s nicely-rounded Hamburger Hills). Other futile attempts at characterization also fall flat, like Dicksize being a career military man, left rudderless when assigned leave, and then creaming his camo when assigned the Skull Island mission. We recognize each of these characters from bullet points in the Selling Your Hollywood Screenplay Manual:

John C. Reilly is the bearded loon, who turns out to be the pilot from the cold open. He’s the Dennis Hopper in this Ape-ocalypse, and the only character well-rounded enough for a poignant post-credits resolution. Providing exposition on the ape (“Kong is king around here; god to these people”), and the “skull-crawlers” (“I never said that name out loud before, it sounds stupid now that I think about it”) – giant iguana-like monsters that are genuinely scary, taking the place of the tyrannosaurs in any given Kong adventure. Why? Because of Kong’s new SIZE; he needs bigger foes. Everything is giant – oxen, spiders, stick insects, squid – except for the human roles. Outstanding production values save KONG from the B-movie pile, but the vapid characters drift it back.

I love the smell of ape-harm in the morning.

For once, the great ape is not played by Andy Serkis in mocap; Toby Kebbell and Terry Notary don the motion-capture suit (veterans of playing apes in the modern PLANET OF THE APES saga), and find the connective tissue between all the Kongs:

He tries to rip apart the monster’s jaws (like KONG 1933), he walks upright (like KONG 1976), he is seamless, wondrous CGI (like KONG 2005). And his “realism” sells this film. We do not doubt any more that what is onscreen is absolutely in the environment. I like the way Kong just wanders around and appears here, appears there, unhurried. As I always complain in JURASSIC PARK movies, we never get to see the dinosaurs just being themselves before the Running and Screaming starts. It’s nice to see Kong stop to get a drink.

When T-shirt finds an ox trapped under a helicopter and tries to save it, Kong is there to help. He looks down upon her magnificent push-up bra, ponders on his animal attraction, then strides away. (But Kong is a carnivore – those incisors didn’t evolve for herbivorous diet – wouldn’t he EAT the ox? Instead, we only see him eating a squid when it attacks him. As in every movie that anthropomorphizes animals (MADAGASCAR, ZOOTOPIA), mammals don’t eat mammals – but feast on fish. Unless you’re in NEMO, fish are no higher than plants in Hollywood’s hierarchy.)

The scant connection between blond and ape is downplayed here, because of the extended universe the studios intend to tread. If Kong fell in love – he would have to die. The theme will never more be “beauty and the beast.” Kong is necessarily beauty (of nature) and beast (of destruction) all in one.

That’s what happens when you do it gorilla style.