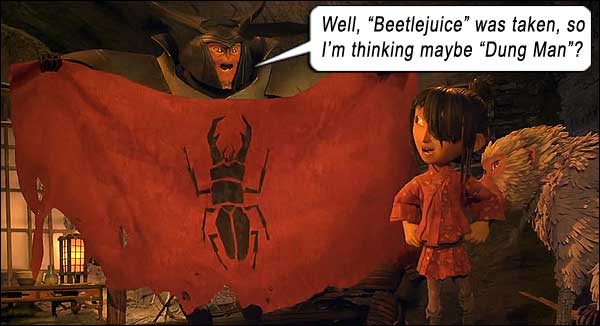 Arbitrary magic. The last resort of bad storytelling. When Magic has no limits, when it works here but doesn’t work there, when it is employed as deus ex machina here, then forgotten there, just throw out the story and start again, because you’ve obviously written yourself into an illogical corner – and now you get to call it a “kids’ story” as blanket excuse for thoughtless writing.

KUBO AND THE TWO STRINGS is meant to be an inspirational journey, the quest of a young Japanese boy to find his father’s mystical armor, to defend himself against his pursuing grandfather, but – like any story driven by arbitrary magic – this technically brilliant stop-motion animated adventure ends up merely a pointless quest where no one needed to leave home.

Pity, since the tale started auspiciously, with a Japanese woman in a small boat, adrift in a stormy ocean. Head bowed, she slings a shamisen – a Japanese instrument like a three-stringed banjo. She wears a red backpack. A boy’s narration informs us, “Pay careful attention to everything you see and hear, no matter how unusual it may seem…” (Oooh, it’s going to be an intriguing mystery like THE PRESTIGE or maybe a twisted thriller like INCEPTION or MEMENTO!) A giant wave threatens to crash over her boat. The woman raises her arm and strums the shamisen – and cuts the wave in two. It is awe-inspiring. It is Magic. We accept this, taking it she is a powerful sorcerer, or that the instrument is magic. But then… A wave rises up behind her and topples the boat. (Uh, you just used  magic to cut that other wave. Why not–? Onward…) She is washed ashore, wounded. A distance away, we hear crying from her backpack. Again we are touched with emotion as we see the courage of a wounded mother, struggling across the sand, to be with her baby at any cost. Excellent. Then more narration: “If you forget what I tell you, even for an instant, then our hero will surely perish.”

As it turns out, none of this is pertinent. Because – magic.

Young Kubo (voiced by Art Parkinson), now living with his debilitated mother atop a seaside cliff, frolics into town to play his magic shamisen in the square, having his origami come to life as he relates a tale that is actually the plot of this film. (From the crowd, we hear a baritone, “Oh my!” and realize George Takei is one of the characters.)

We give him a pass on all this magic, because now something else is bothering us… the accents. This is feudal Japan. And everyone – EVERYONE – is speaking with a modern American accent and vernacular. It is very off-putting, and illustrates the small-mindedness, disrespect and venality of American cinema. (I’m not expecting to see a “kids’ cartoon” in subtitles, but at least make them Japanese-toned. For those who consider that racist, consider how much more racist the current American English is.)

Then the magic starts piling up and topples the story itself: Kubo’s evil grandfather, Moon King (voiced by Ralph Fiennes), took Kubo’s eye when he was a baby (as revenge for his daughter marrying the man she was sent to kill, Hanzo), and is searching for Kubo even now to take his other eye (uh, immediately I ask: When Moonie was taking the first eye, why didn’t he just spend the time taking both? And the reason he wants both Kubo’s eyes?  So Kubo can join him in the spirit realm. Sounds mighty catholic to me. Moonie extrapolates, obviously not listening to a word he himself is saying, “While you still have that eye, Kubo, you can see all the hate and pain in the world. But if I take the eye, you can come live with me in paradise.” Well, that makes all of ZERO SENSE. Doesn’t have to: kids story.)

Moonie’s two daughters, Kubo’s aunts (voiced by Rooney Mara), are also after Kubo – they’re totally magic and appear out of nowhere, fly, make explosions, you name it. Why do they even want his eye? Like Moon King, they’re the most powerful bitches in black hats around. Kubo’s mother saves him from their attack by putting two wings on Kubo’s back so he can fly away (because – why not?) then making her own giant explosion to kill her sisters and herself (because – why not?).

So Kubo flies to a faraway deserted town, and sees a helmet hanging from a high tower. Stay with me on this, Movie Maniacs: Kubo lands, divests himself of the flying robes, then runs at the tower to try and topple the helmet with his boy-weight… Uh, YOU WERE JUST FLYING! And you saw the helmet before you landed… This is what I mean by arbitrary magic. And its contradictions within its own story.

Kubo embarks on a quest to locate the same three pieces of mystical armor that his father Hanzo sought. To defend himself against Moon King. Turns out Moonie didn’t want Hanzo finding the armor because it would make Hanzo too powerful. (So do we deduce that Hanzo – who is painted as a dead hero – was seeking ultimate power to topple the rule of the Moon King? Sounds mighty military coup to me.)

Kubo is joined on his quest by a toy-monkey-turned-real called Monkey and an insect-turned-warrior called Beetle. Monkey sounds like Sigourney Weaver (–is Charlize Theron), and Beetle sounds like George Clooney (–is Matthew McConaughey). [These spoilers ahead do not spoil the story any more than the stupidity of the story itself, wallowing as it does in arbitrary magic.]

In the film’s final act, we realize that the quest was pointless – as the spirit of Kubo’s mother was in Monkey (which means she didn’t die in that explosion), and the spirit of his father is in Beetle (who conveniently had memory loss). The family that he desired was with him all along, and the Moon King was defeated NOT by the indestructible armor, but by magic. (Who woulda guessed?!)

The finale is based around Kubo’s “Two Strings” of the title – one is a hair of his mother’s, one is his father’s bowstring, and he plucks a third from his hair to string the shamisen and then strum it at Moon King while reciting bullshit platitudes.

Writers Marc Haines, Chris Butler and Shannon Tindle must have been on a tight schedule to not step back for one second and think about the illogical events and unsustainable motivations of their characters. Animator and first-time director Travis Knight nonetheless frames the illogical story beautifully. And the stop-motion artists should be commended for creating a piece so smooth I doubted I was watching stop-motion at all, and pondered many times that it may be CGI or 3D animation rather than that veteran artisan technique. The film is filled with Japanese culture – being raped by American studios.

While we’re going cross-eyed trying to figure where the next deus ex magica will land, everyone dies, because the very last deus ex – in a film driven by arbitrary magic – must necessarily be to bring everyone back to life. Funny how Magic can bring all the supposed “good” characters back to life, but the much more potent black magic employed by the “evil” characters has somehow ceased to function for them. Like any good Japanese massage parlor – a happy ending. Happy for infants who think this is how the world works; intolerable for actual storytellers.