With astounding cinematography, well-written characters, directorial creativity, incredible technical prowess and stunning animation, KUNG FU PANDA only lacks in one department – its message that Prophecy Is Better Than Practice. 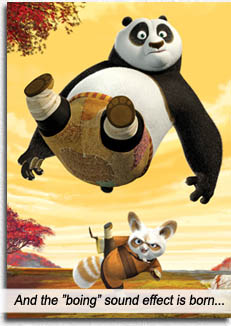 Directed with kinetic frenzy by Mark Osborne and John Stevenson like Michael Bay meets John Woo, the awesomeness of the Panda is diluted with the insidiousness of the Pander.

Jack Black voices fat panda Po, who lives in a China where animals populate the land (mainly ducks and bunnies as the proletariat classes). Obsessed with kung fu, he watches from afar as the famous Furious Five (Monkey, Crane, Tigress, Mantis and Snake) show off their martial arts skills in the imperial palace. Through a series of mishaps, Po is accidentally chosen as the Dragon Warrior, a prophesied protector of the kingdom. The indomitable evil force he must combat is an exceptionally trained, villainous snow leopard called Tai Lung (Ian McShane, eating scenery like candy). The leopard’s prison escape is a chest-beating showcase of his thunderous kung fu talents that will have you howling for red meat.

Though this impossible matchup should end in Po’s grisly death, he triumphs. No surprise. Kid demographic. But it’s how he does it that sends chills up my spine with its insensate message – every few minutes, the promotion of laziness over dedication. Despite the film being beautiful to look at, despite kung fu as realistic and energetic as any live action thriller, despite A-level talent voicing these pixels (Dustin Hoffman, Angelina Jolie, Jackie Chan, Lucy Liu, Michael Clarke Duncan), the laziness message is simply stupefying. To make it more stupefying, though a message like this should destroy the film’s credibility, instead it is regarded as laudable!

Which shouldn’t be a surprise in a society that has come to regard mediocrity as a favorable trait over virtuousity – America. What arrogance and hubris that bum-lazy Americans should set this tale in China, a land renowned for its rigorous discipline.

Silly mystical prophecy is no substitute for experience and hard work, yet that is how Po is chosen, over five warriors specifically trained for the combat of Tai Lung. Throughout the tale, the Furious Five warriors continually whine over how to defeat Tai Lung if an inexperienced pudge like Po combats him. Simple! When Tai Lung arrives, everyone fight him! Apparently, just because “the prophecy said” only Dragon Warrior Po can combat Tai Lung, no one else is allowed to step in and save the land. And this stupidity is borne out when the Five fight Tai Lung and fail.

The very discipline this movie exalts is simultaneously disparaged when Po goes Tom Cruise in THE LAST SAMURAI and attains proficiency within weeks by training with the little Common Panda kung fu master (Dustin Hoffman); proficiency which his peers took decades of dedication to attain. Relating to Everyman characters is fine, but there is another class of character we cannot relate to, that we aspire to (like the Furious Five, like Superman); higher characters that drive us to be more than just Everyman. But that’s too much to ask bum-lazies these days.

This message in KUNG FU PANDA is the same “Believe in Yourself” guff that allows Guitar Hero wankers and Air Guitar douchebags and Karaoke dipsticks to think they’re actually “talented.” The damnable, insufferable, noodle-eating message that youngsters glean from this otherwise-enjoyable movie is that proficiency is instantaneous if you would only “believe in yourself.”

No. It is not. “Believing” gives you the impetus to start training in your chosen art/profession. But it will take years to become proficient.

Why do I rail so hotly against this silly story element in this kid’s movie? Because I have tangible evidence that this wrongful message is being heeded unconsciously: in the form of piano students. Kids who have been playing for less than one or two years thinking they can perform rock songs authentically by learning them by rote, parrot-fashion; rushing blindly into the playing, no control, no technique, no knowledge, no feel, no practice, just glazed-eyed for the quick fix instant gratification. This primal behavior is directly linked to media of this ilk.

Murder and sex on film always get the bum rap for influencing children adversely, but “family films” – as I’ve always maintained – are far more dangerous and cause far more breakdown of respect for elders and institutions than a few bleeding bollocks or horsewhipped whores.

Everything about KUNG FU PANDA is excellent. Only the message is kung fooey.