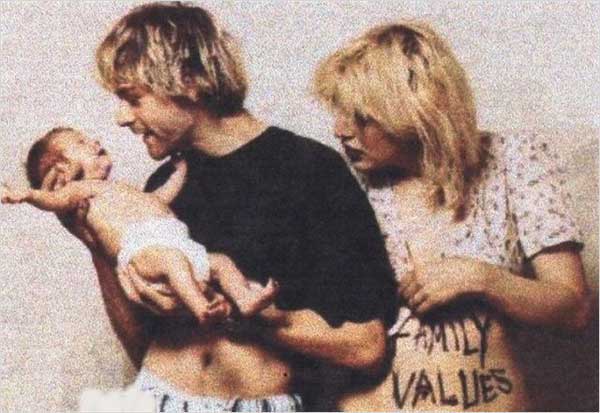 A documentary about Kurt Cobain, as confused, conflicted and depressing as Kurt Cobain.

KURT & COURTNEY certainly looks and feels like a credible documentary, with its hand-held ethos and somber-bordering-on-ominous narration by filmmaker Nick Broomfield, but in the end, it only throws more fuel on the fiery controversy surrounding Kurt Cobain’s and Courtney Love’s relationship and Kurt’s untimely death/suicide, rather than answering any questions definitively.

Kurt Cobain, from a small town boy to a rock star in punk/grunge Seattle band Nirvana; disenchanted with stardom; three albums that swerve the music scene, wailing, railing at the world like a hard rock Holden Caulfield… Courtney Love, also a small-town girl, punk rocker, directionless, control freak, estranged with her father. These two whirlwind forces would marry; heroin, baby, tabloids, Nirvana world tours; then a sudden suicide under suspicious circumstances. Note that Courtney inherited Kurt’s full fortune, being his wife. Word is that they were close to divorce, in which case she would have received only half that amount… Also note that Courtney’s first album with her band Hole, Live Through This, was released the week Kurt died. Just sayin’…

Due to Courtney threatening legal action (she owning the rights to Nirvana’s catalog and vetoing its use in the film), the doc is devoid of the very element that made Cobain a household name – his music. Unable to license any Nirvana songs, Broomfield litters his doc with odd source music, from early Cobain bands, friends’ bands, and generic heavy music. Thus robbing it of a certain level of cred.

Broomfield delves for the truth surrounding the firestorm romance of Kurt and Courtney, and the suspicious gloom of Kurt’s death. He makes little headway, and only reveals what we already know or already suspect: that Kurt was a tormented, lonely soul and that Courtney was a wildcat junkie who was simultaneously Kurt’s deliverance and destruction.

Broomfield is deflected at every turn; he gets piecemeal information that he can’t corroborate; Courtney actively evades him; or he finds himself just talking to junkies who are obviously stoned… 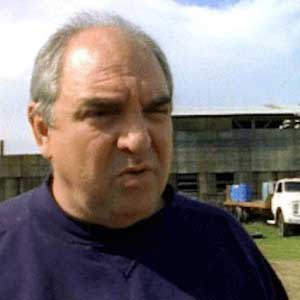 Then there’s Courtney’s firecracker father, Hank Harrison. Author of two books, Kurt Cobain: Beyond Nirvana and Who Killed Kurt?, Hank is an earthy pragmatist who kicked Courtney out of his home more than once for not following his simple rules (no heroin, no junkie buddies, no turning tricks – you know, every father’s basic credo), and is more than ready to vilify Courtney for her lifestyle and her probable role in Cobain’s death! He doesn’t say she did it, but then he never says she didn’t…

Whereas in the 2015 documentary MONTAGE OF HECK, Courtney claims she was in London “thinking about” having an affair, here, some 17 years earlier, Hank bluntly says she was there screwing around with Smashing Pumpkins leader Billy Corgan. His straightforward vitriol toward Courtney causes Broomfield to comment he is treating Courtney harshly, but I’m willing to bet Broomfield has not had relations with a junkie. There’s no turning them. I’m with Hank’s “tough love” all the way. 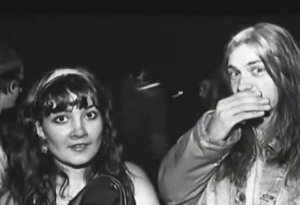 Broomfield interviews Kurt’s ex-girlfriend, Tracy Marander, in her house filled with old hippie and Nirvana paraphernalia, almost like she’s waiting for Kurt to come back to her. He also interviews one of Courtney’s former lead singer boyfriends, Rozz Rezabek, now happily married with a house and family of his own. The contrast is striking: whereas Marander only has loving words for her creative Kurt, Rezabek complains of Courtney trying to turn him into something he was not, telling her to fuck off onscreen, saying if he had stayed with her, he would have ended up with a gun in his mouth. Interesting choice of words… 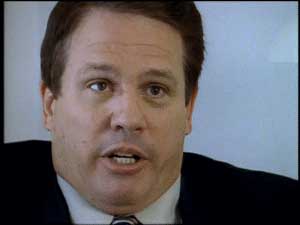 Tom “Courtney Did It” Grant

Then there’s Tom Grant, ex-LA county sheriff, hired by Courtney to find Kurt in 1994 (when it was not yet suspected he was dead). Grant is fully convinced Courtney is responsible for Kurt’s death, citing Kurt’s fortune as her motivation. He claims Kurt could not have even raised the shotgun to his mouth with the amount of heroin in his body at the time of death, meaning someone else must have been in the room to shoot Kurt and set up the “suicide” scene. Grant claims he was hired by Courtney “to make it appear she did everything she could to locate Kurt when he was missing.”

Grant thinks the word suicide entered Kurt’s lexicon when Courtney entered his life. He argues that even if Kurt was reportedly “suicidal,” that was no excuse for the police not to do a thorough investigation of the scene. A Dr. Colin Brewer has discounted Grant’s theory, stating it would take more than a minute for the heroin to circulate, giving Kurt ample time to pick up the gun and use it. Grant was bankrupted pursuing the case.

Kurt loved the idea of being in love. Asked why he changed his mind on having a baby: “I really was a lot more negative and angry and everything else a few years ago. But that had a lot to do with not having a steady girlfriend. That was one of the main things bothering me that I wouldn’t admit at the time. Now that I’ve found that, the world seems a lot better for some reason. It really does change your attitude about things. For years I would’ve said, ‘How dare someone bring a child into this life?! It’s a terrible way to go – the world’s going to explode any day!’ and stuff like that. But once you fall in love, it’s a bit different.” So he just needed to get laid? If we think he sounds a little immature, remember, this guy was just 27 years old when he died. Prone to all the emotional pitfalls of having a rudderless, unreliable, yammering, philandering junkie girlfriend.

Despite his glowing testimony, by all accounts, Kurt was depressed because of Courtney. Though “they bonded pharmaceutically over drugs,” Kurt maintains he took heroin to curb his chronic stomach pains. It’s a bullshit excuse, yet at the time of his death, he was reportedly trying to get clean. 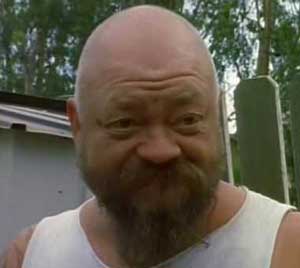 The most bizarre moment in the doc is surely Broomfield meeting with a bearded, dirty, doughy tramp called El Duce (aka Eldon Hoke), a “singer” in a lecherous punk band, who alleges he was offered $50,000 by Courtney to kill Kurt. (Though his Italian epithet means leader or duke, in his case, its pronunciation (el doo-chay) conjures its phonetic meaning of “douche.”) El Duce is a cartoon mountain man: scraggly beard, cackling laugh, crazy eyes not quite focused, erratic speech not quite sane. Though he declined Courtney’s offer, he claims openly, “I know who whacked him!” It’s the eeriest moment in a film filled with eerie and uncomfortable moments. Especially when we discover that during the making of this film, El Duce was reportedly “killed by a train.”

Interviewing Kurt’s Aunt Mari is another bizarre encounter. A Christian wacko who doesn’t believe in the murder conspiracies, she is the epitome of the spinster: plays acoustic guitar at schools like a nun, relating stories that clearly bore the kids, then singing her original inspirational songs that – like Courtney – might drive some of those kids to suicide. She has a small home studio where Kurt recorded some of his music, which she is all too proud to display; we sense she thinks others will regard her as kewl for having a studio where the instigator of Nirvana tread… and she’s just a little too old to sport that mullet…

One of the most illuminating interviews is with Amy Squier, the Cobains’ babysitter, who succinctly characterizes them: he was quiet, courteous; she was a harpie, namedropper, sucking the spotlight from everyone else; he kinda sat there, enjoyed the contrast; she wanted the mansion, the big car; he didn’t. Of course, all this delivered while in a purple haze.

Broomfield and some other activists try to ambush Courtney at a rehearsal studio, then eventually do so at an ACLU event where she is receiving an award. Broomfield comes at her like any other reporter, so she is unaware of his intent, yet in this uncomfortable interview, he can’t tease out any red meat. In the end, he resorts to crashing the mic onstage (as if he was a speaker), and pointing out the irony of this person who issued death threats to journalists for negative reviews receiving an award from the American Civil Liberties Union – before he is unceremoniously kicked off. I don’t know what that tirade was meant to achieve, because it never got him any closer to the truth about Kurt’s death, or an interview with Courtney.