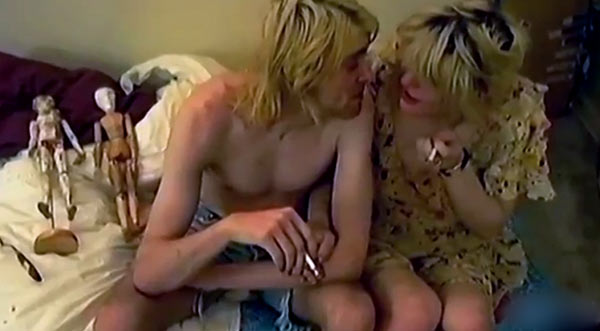 On skank with skank.

MONTAGE OF HECK tells us just the bits it wants to tell us about Kurt Cobain. There is much content from Cobain’s birth in Aberdeen, Washington in 1967 to his troubled teen years, shunted between divorced parents, friends’ couches and sleeping on streets. But when he achieves fame as the instigator, guitarist, songwriter and vocalist of the band Nirvana, practically all information stops: We see energetic performances, but no title cards or narration to tell us the venue or date, or anything else about the gig; we see studio footage, album covers, parts of music videos, but again, no information on what or where or why. A random montage of images and sounds thrown together by an art student who shuns high grades because that would be pandering to the bourgeoisie.

I don’t get it. Is this a chronicle? A tribute? An obituary? And why in 2015? (Maybe it is a reaction to the documentary SOAKED IN BLEACH, released at the exact same time? Which claims girlfriend Courtney Love had a lot more to do with Kurt’s “suicide” than Kurt himself. Wink wink.) Hardcore fans of Nirvana and Cobain will get a kick out of it, but uh, the rest of humanity… Director-writer-editor Brett Morgen has something to say, but I can’t figure what it is, except maybe showing off Courtney Love’s tits.

Most fans of rock music know of the broad strokes of Cobain’s life, so hitting those points – the cover of Nevermind, the video footage of Smells Like Teen Spirit, smashing guitars onstage – is unimpressive and redundant. What would be cool is background information and context. Such as: how did Cobain get from living with his girlfriend and playing garages, to releasing Nevermind and playing in front of 20,000 people? Where are the Scenes Missing?

I’m prepared to believe Cobain is a good songwriter, a mediocre guitarist, an untrained vocalist, a loving father, a junkie, but I’m not going to be cajoled into regarding him as a genius, which is the territory this documentary treads.

We can sense Morgen is a superfan, as he goes to great lengths to make Cobain’s creative output look sexy. Journal entries/song lyrics are spiced up with moving text and effects, Cobain’s often bizarre sketches are animated like an LSD trip, and his raw dinosaur music is orchestrated and subtly inserted under many visuals to imply it was greater than it was. But if we’re paying attention, his journal scrawling reflects a person pathologically damaged, lonely and isolated; his drawings are just doodlings that no one would look twice at if he weren’t Kurt Cobain, and if you orchestrate any artist’s songs, they achieve a “nobility” never intended in the original work – hell, listen to the KISS song Shout It Out Loud when it’s coupled with the Melbourne Symphony, and try to tell anyone it’s about brainless partying… 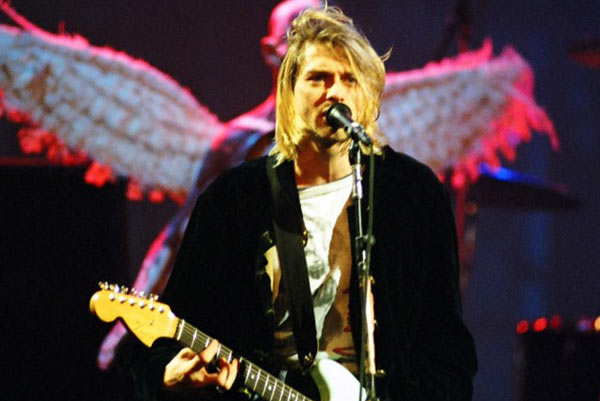 Journal entries bleed dysfunction (“rape is good rape is good rape is good” “Take a knife and kill yourself,” etc.) It is commendable that the doc shows many journal entries, but Cobain is lucky he was a celeb in the early 90s, because six years earlier he would have faced the wrath of the PMRC and the courts who kept accusing rock bands of influencing teens who, uh, killed themselves… They wouldn’t have had to squint like they did to hear “hidden” messages in Ozzy’s or Judas Priest’s music – Cobain had it laid bare for all to hear.

Morgen also implies Kurt is greater than he is by leaving stuff OUT: Movie neglects to show us the pathway to a record deal (because that would involve other people and would dilute Kurt’s primacy); when Nirvana are seen playing giant arenas, it neglects to tell us anything about the gig (again, it would dilute Nirvana if we knew this giant arena is part of Ozz-Fest or that they were the first band on a bill of 8 bands.). Kurt’s early years are so painfully detailed, we even see his birth certificate (great! At least we know he’s not from Kenya), but his “famous” years are sorely under-represented.

If you read this doc’s Wikipedia entry, there is a wealth of information there that is simply NOT in the doc! Here’s an example: “The band signs onto Sub Pop record company and they release their first album “Bleach”. The band starts to have interviews and doing tours. After a short while, Kurt breaks up with Tracy, Chad leaves the band, and Nirvana leaves the label to sign onto DGC Records and Dave Grohl becomes the new drummer.” Literally, this is what we see in the doc: a few flash-frames of a Sub Pop contract (in retrospect, I realize it is meant to signify their deal), nothing of the Bleach album, a montage of stills from gigs and music rags; we do not see the change of contract and there is nothing about Chad either being in the group or out of it – Grohl seems to be the drummer from the very beginning. The Wiki article is obviously written by a fan who knows their shit; pity he wasn’t the one who made this doc.

Krist Novoselic’s title card reads, “Kurt’s friend” – Jesus Christ! Why is director Morgen pandering to subversive pricks and deflective inferiority complexes? This was the bassist of Nirvana, you tool! Introduce him as such. This is the kind of annoying disinformation this documentary is riddled with.

In one respect, Morgen can be admired for not following the same old flow chart of musician biographies – we don’t see chart positions of songs or albums, we don’t get the drug addiction as the second act and the rehab as the third act (matter of fact – there IS no third act in Cobain’s life!)… Maybe in presenting Cobain’s life so haphazardly, Morgen is adhering to the punk ethos of his subject?

Fans will get a kick out of seeing all the allusions and clues to larger segments of Cobain’s life, but non-fans will scratch their head and wonder who exactly is the mediocrity – Cobain or Morgen?

There is no context for Cobain’s rise to fame. No mention of the glossy-rock hair-band explosion at the time, no understanding of Nirvana being chosen by the industry and marketed as reaction against that moribund genre; no examination – even perfunctory – of the Seattle scene that Nirvana spearheaded unwittingly.

Talking heads include Don Cobain (father), Wendy O’Connor (mother), Jenny Cobain (stepmother), Kim Cobain (sister), Tracey Marander (ex-girlfriend, who somehow went from a height-weight proportionate young woman to morbidly obese). And I don’t trust ANY of ‘em! Unless we hear an artist’s thoughts espoused by THE ARTIST ALONE, I tend to discount everything parents, siblings, business partners, lovers and spouses say. The closest we can get to Cobain’s mind is bassist Krist Novoselic, who seems just worn down to a nub after hitting it big so ferociously and then becoming old and bald. It may be an indication of this doc’s lack of credibility that the most successful post-Nirvana member – Dave Grohl – is not featured here, only seen in vintage footage.

Kurt’s mother tells a repugnant anecdote about Kurt coming down the stairs with a new tape in his hand, “It’s the master for my next album,” and she insisting he plays it for her, loud… The way she recounts it – all in retrospect, mind you – is that she started to cry “out of fear for him,” telling him, “You better buckle up, ‘cause you’re not ready for this.” How prescient of a mother to tell her son that he’s going to have a multi-platinum album that will rocket him to fame after the fact. And 20 years after his death. A “repugnant” story because she is vicariously sopping up the fame that comes with Nevermind, claiming to have recognized its greatness before it was even vinyl. I have absolutely no doubt that Wendy O’Connor never said anything remotely like this to her son Kurt Cobain. But I’m sure that in her mind she really and truly believes that she did. Dare we doubt that 25 years ago this woman had Aquanetted hair and followed Saxon? What I’m saying is, O’Connor as a thirty-something had as much credibility judging sea-changes in the music scene as any other Aquanetted Saxon fan…

At the height of his fame (who knows or cares what year that might have been? We’re all just so cool cos we’re junkies), Kurt starts a relationship with the girl who would eventually murder him, Courtney Love. The doc treats it like a “soul-mate” pairing, even though at the time of his death/suicide(?), there were many stories/rumors/police reports of dustups and demons. Courtney corroborates this by saying she was “not as monogamous as Kurt” and recounts a time he pilled himself into a coma when she had simply thought about cheating on him (this incident is portrayed as love in action, not a cry for help or a suicide attempt). Strangely enough, Courtney appears in her talking head segments uncharacteristically clean and lucid and, for want of a better word, straight.

Overlong home videos of Courtney and Kurt frolicking aimlessly in their house – just a coupla junkies. They look dirty, they probably smell just as bad, they’ve got pock marks marring their empirically pretty features (due to the drugs), they’ve got shitty furniture, she keeps exposing her tits as if she’s doing us a favor, their house is in disarray, there’s graffiti on the walls; at one point, Courtney gives their infant daughter, Frances Bean, to Kurt to hold on his lap – and he is nodding off uncontrollably. Then denying that he’s stoned, just “tired.” Dude, I’ve seen tired and I’ve seen heroin – and that’s heroin. Yes, these are home movies, but if you’re in the supposedly “biggest band in the world” (which is never proven, just stated a lot), you would think these people would be living cleaner, if not more upscale.

The encomium becomes darker as it nears the end of Kurt’s time on Earth, with speculation on his constant stomach ailments and addictions making him sick of life; Kurt writing he would “give up everything for good health.”

The end title cards tell us nothing either. Apparently, one month after returning from Rome, Kurt Cobain took his own life. He was 27 years old. Year? Nope. (Kurt’s death was April 1994, according to all other media that knows how to convey information.) They cut to these cards straight after showing Nirvana’s MTV Unplugged performance. Year? Nope. I had to look up that Unplugged was recorded November 1993, and released in November 1994, after Cobain’s death. Wouldn’t that have been an interesting posthumous factoid?

Fuck you, movie. Take a knife and kill yourself.

Leave a Reply to Poffy The Cucumber Cancel reply