In his book, On Directing Film, David Mamet says of movies, “it’s all make-believe. The question is, how good is the make-believe going to be?” M. Night Shyamalan‘s LADY IN THE WATER is truly what it sells itself as – a bedtime story; make-believe of the highest order, taken with a generous pinch of sandman salt and a mountainous suspension of disbelief. 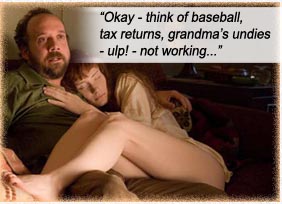 Artfully woven, beautifully shot and accidentally involving, this movie solidifies writer-director-actor Shyamalan as a tale-telling talent akin to Stephen King, a director rivaling the eye of Spielberg – and an actor only slightly better than Keanu Reeves.

Yet, redemption. Regarding his thespianic dabblings, I’ve got two words for Night’s naysayers: Darth Vader. Though he is far from usurping the thrones of Oldman or Ford, Night need only display two emotions onscreen to put him miles above the Christensens and Cruises – and he pulls off his emotionally-draining role in LADY quite commendably.

Up against Paul Giamatti, he has to. As Night is the new breed of fantasist, turning Hollywood’s formulaic swill in on itself, so too is Giamatti – like Jack Black, through sheer talent – redefining the new breed of leading man. In LADY, Giamatti mines that put-upon Everyman character we know so well, yet taps into acting territory reserved for the De Niros, Hoffmans and Day-Lewises. Playing a lonely, stuttering caretaker – and making it look as painful as it must really be (a stutterer and a caretaker) – he turns in a gutsy performance that makes all his awards for SIDEWAYS and CINDERELLA MAN sit that much more securely on his shelf. 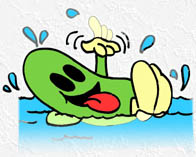 Poffy in the water

Giamatti is Cleveland Heep, caretaker of an apartment complex called The Cove, which has raised the condition of Nothing Ever Happening to an art form. Into this lusterless community, up through the swimming pool, comes Story (Bryce Dallas Howard, daughter of director Ron), one of an ancient race of Sea People, called a narf (which translates as “great legs, but a face like Richie Cunningham”), whom Cleveland keeps finding naked in his shower, quickly buying her tale of being sent to mystically jog the inspiration of surface people (the nakedness can only help the inspiration).The narf legends are intermittently revealed through one of the Cove residents: apparently, Story must gather together a group of prophesied icons such as The Guild, The Healer, The Wordsmith – but lands a coterie of Batman villains instead, in the form of The Whiner (Giamatti), The Puzzler (Jeffrey Wright) and The Stoners (a bunch of surfer dudes).

Even as a patch of Big Bad Astroturf stalks her – all the better to scrunt you with, my dear! – Story, with Cleveland’s unintentionally-comedic help, discovers The Writer (who is actually – wink wink – The Director) whom her presence inspires to complete a magnum opus which will “change the world.” (We presume The Writer’s inspiration has something to do with seeing Cleveland’s shirt sensually draped over Story’s milk-pale shoulders.) By casting himself as The Writer, Night brings down the wrath from all walks of entertainment wannabes (critics, directors and writers alike), who begrudge Night this indulgence of Ego and frankly, I’m getting sick of the hypocrisy – who gets anything done without Ego?! It’s all ABOUT Ego. As Gene Simmons so astutely sneers, “You wish you were me.” And because they can’t or were never given the opportunity to write, direct, produce and act, all they have is vitriol for someone who can and does. Try looking on the bright side of Night’s humble, Homeric character – it may be the only time we’ll ever hear him say he is “nothing special.”

As with his two previous movies (SIGNS and THE VILLAGE), Night once again creates an insular world where nothing outside its boundaries matters in the least. This is the movie’s great sleight-of-hand and simultaneously its great failing.

The tale works effectively as long as we believe that Cleveland believes wholeheartedly in Story’s veracity – but convincing one lonely, balding man you’re a magical sprite can’t be that hard with legs like those; we are distracted minimally when everyone buys into the fairy tale as readily as Cleveland. The Night sleight-of-hand is employed just when we feel secure with the story’s predictability – what we thought was a plan coming together was merely misdirection. We recall Night’s notoriously subtle foreshadowing – how he merely pencils in, rather than hammers home – and realize that he has once again concealed his mystery in full sight.

The failing of the movie is in its less-than-compelling climax, for even when the plan does come together, we ask ourselves what exactly came together; it seems too pat for Story to find every icon that she needs amongst The Cove’s residents, and except for The Guardian and The Healer, no one else seemed to be integral to protecting Story and The Writer; that is, anyone could have picked up a rake to fend off a twiggy wolf, you didn’t need to be “seven sisters” or “a man with no secrets.”

Yet again – redemption: the stirring and stunning music of James Newton Howard dynamically spirits us into this world of twigs shaped like wolves and mermaids shaped like Twiggy, salving the wounds of weak plot; Giamatti provides a surprising amount of humor amongst the suspense, at times, overlapping the sublime and ridiculous, as when he pretends to be an infant to glean more of the narf legend; Night’s film-making itself is a wonder to behold, with his penchant for making every frame count, his creative camera placements and artful use of out-of-focus shots; and beautifully simple aspects like lighting a night scene as if it is night! – i.e. no backlit trees and shards of light aimed at actors when they hit their marks, but an overall, enshrouding darkness.

LADY even gives us a self-referential movie critic (Bob Balaban, whom some critics take as seriously as he satires them), who didactically elucidates “movie formula,” specifically so that Night can show us how LADY ingeniously subverts that formula…

LADY IN THE WATER is a suspense tale, not easily forced into a horror mold – nor should it be. Yet marketers, reviewers and audiences alike insist on calling it “horror,” then complaining that “it ain’t that scary.” As much as he is lauded by film aficionados and fans alike, an unsophisticated coterie obsessively maintains that unless an M. Night Shyamalan film contains a “twist” exactly like that in THE SIXTH SENSE, it is worthless. Who made up that rule? Writing, acting, music, sound design, ingenious plot arcs matter not to these bent-parochial netherworlders. Either they need to get over their stone-stupid provincialism, or they need to get laid.

LADY is proof that Shyamalan still gives his audience more credit than they deserve, as the “dumb” contingent, complying with the saw of empty vessels making the most noise, are the most vocal in their deprecation.

Yet the same people who denounce this master storyteller for some of the stranger aspects of this fiction (the boy reading portents in cereal boxes, the wolf hewn from garden greenery, the aquatic lady not having gills) are the same people who believe in humans with wings in a cloudy habitat called heaven; who believe in extraterrestrial anal-probing; who believe that a man can absolve them of their vilest crimes by being flayed by Romans for two days straight two-thousand years ago; who believe planets influence their lives more than the dangerous stupidity which would lead them to believe that in the first place – and whilst vilifying Night for fiction which brings only entertainment to those intelligent enough to glean it, these people would readily bring suffering to those who do not regard their idiotic fictions as reality.

Maybe one of the most poignant messages of LADY IN THE WATER is that even the insignificant among us may have a significant role to play on some grander canvas. Unfortunately, only the “significant” will glean that message. And those who pule for twists and horror and moronically await SIXTH SENSE PART II: THE SEVENTH SENSE, or SIXTH SENSE III: OCEANS’ FIFTEEN should take my advice and get themselves a massage.