Jules Winnfield in the ‘burbs.

When Samuel L. Jackson gives you “that look,” you don’t wanna be on the receiving end of it. 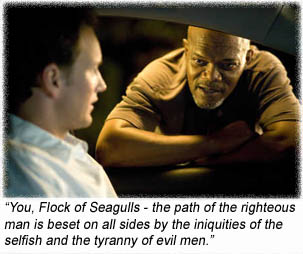 Jackson is Abel Turner, a widower and strict, old-school father with two young kids. He lives in LAKEVIEW TERRACE, a modern Los Angeles suburb. He’s an eccentric cop, who likes to patrol the neighborhood at night and make those sinister Sam Jackson eyes at people. And he’s a racist.

Shades of PACIFIC HEIGHTS (with Michael Keaton, 1990) and ARLINGTON ROAD (with Jeff Bridges, 1999), LAKEVIEW TERRACE puts Jules Winnfield from PULP FICTION in a quaint suburban setting, and lets him live like his wallet: a bad mother fucker.

Chris and Lisa (Patrick Wilson and Kerry Washington), a frisky, young interracial couple, move in next door to Abel and inflame his old-school ire by being white and black and married. When they bonk in their pool in view of Abel’s peeping-tom kids, he gets his Jules on and asks Chris for an apology while giving him “that look,” which seems totally reasonable – I wouldn’t want to see Patrick Wilson’s pasty torso slamming into Kerry Washington’s freaky ebony either.

But other tensions build and discomfort settles like a Jheri curl wig on Jules’s head: Abel’s yard lights shine directly into Chris and Lisa’s bedroom, Abel verbally attacks Chris and Lisa’s party guests with his Type A personality, Chris and Lisa discover acts of vandalism around their property, Abel hosts a rowdy all-night stag party… Chris and Lisa know Abel is terrorizing them, but cannot tell anyone. Who you gonna call? Abel is The PO-lice. When it gets so uncomfortable that Chris has to warn Abel, “Get off my property!” Abel’s rejoinder is, “Or what?!”

Mention race in Los Angeles, and no one is thinking about the L.A. Marathon. Even in an upper-class suburb in 2008. It takes Chris awhile to deduce that Abel might just be acting out on his resentment against seeing a white man “married to dark meat.”

In his closing argument in A TIME TO KILL (which also starred Sam Jackson), Matthew McConaughey described a horrific rape and torture of a little black girl, then turned the tables on his listeners by saying, “Now imagine she’s white.” It was a stinging slap in the face to us viewers and his jurors alike. Because we’re ALL racist. Whether we know it or not, whether we like it or not; it is an evolutionary trait that makes us wary of differences.

In LAKEVIEW, they’ve done the McConaghey – turned the tables on racism to make the black cop the intolerant bigot, so at first we allow Abel’s racism to run a little buck-wild due to Uncle Tom and blah blah. But we realize that racism is unacceptable no matter which side it poisons from.

Abel has his demons, dealing with his wife’s death due to a white man. And – let’s face it – he misses Vincent Vega. But that’s no reason to go hell-tilt off the rails into Hollywood killer territory in the third act.

Neil LaBute directs, successfully creating palpable tension, then blowing it all in the final sequence in a pat shoot-em-up wrap. Writers David Loughery and Howard Korder seemed like they either ran out of juice or the studio suits wanted an ending with sizzle for their shizzle. I’d bet the latter.