Bland of the Lost. 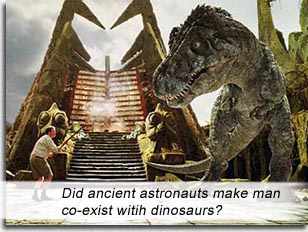 I’ve pretty much had it waiting for Will Ferrell to make another funny movie. The last one was ANCHORMAN: THE LEGEND OF RON BURGUNDY (2004), although I admit I have not seen his TV special, YOU’RE WELCOME AMERICA: A FINAL NIGHT WITH GEORGE W. BUSH (I’ve always liked his Dubya).

LAND OF THE LOST, a movie version of the camp 70’s TV series, finds Ferrell as Dr. Rick Marshall, a scientist who falls through a waterfall wormhole with two friends, shapely Holly (Anna Friel) and shyster tour guide Will (Danny McBride), and finds a land where all time intersects; where cars and dinosaurs and motels and alien spaceships co-exist randomly in a desert backdrop.

And there he spends time running and screaming, character arcing and trying to act funny. Ferrell’s lines seem to be less part of the script and more like some idiot making jokes at the end of your table in Denny’s at 3 a.m.

Amidst the boring cascade of lame bits and dynamite special effects, you will find yourself drawn to the way Anna Friel’s t-shirt strains across her expansive breasts. Other than that, no other reason to watch this movie. Well, maybe Anna Friel’s legs, somehow thigh-high lickety-smooth in a land with no feminine razors.

Danny McBride is once again a cross between a car salesman and a Wrestlemania redneck. And Jorma Taccone (of Lonely Island fame) plays Chaka, an ape-like creature who allies with Rick Marshall’s troop, a cheeky smile on his face constantly, as if he’s the only one really having fun with his role. Maybe it’s because he gets to grab Anna Friel’s breasts constantly under the pretense he’s an uncivilized caveboy.

If you remember Sid and Marty Krofft’s cheap TV series, it was pretty execrable story-wise, acting-wise and effects-wise (puppet stop-motion dinosaurs chroma keyed with the actors on indoor sets supposedly representing prehistoric jungle). So it’s hard to believe how a modern movie with the benefit of hindsight, education, CGI technology and professional actors can be even worse.

As with the TV series, there are Sleestak here: slow-moving, scaly, upright, lizard-creatures that have no purpose other than to chase Our Heroes aimlessly into caves with glowing rock crystals that open dimensional doorways. Nothing’s changed.

LAND OF THE LOST is so mundane, even the most realistic t-rex ever committed to screen cannot draw your thoughts away from contemplating throwing yourself over a waterfall rather than watch this movie to its utterly limp conclusion. Save me, Anna Friel’s Breasts! You’re my only hope!