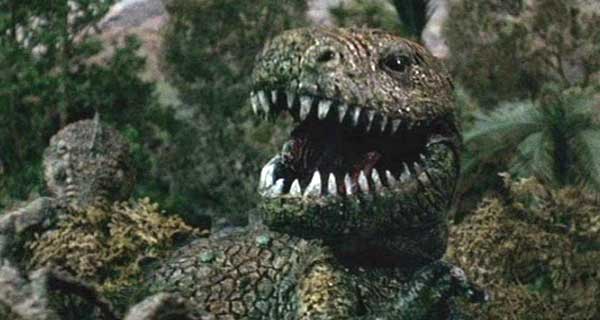 “Argh! My skull feels a little too round for evolutionary development.”

Doug versus dinos, in a battle to the rubber suit!

During World War I, German and British sailors onboard a U-boat encounter a prehistoric land where every dinosaur is trying to kill them – even the herbivores.

THE LAND THAT TIME FORGOT works reasonably as a war actioner in its first act, then forgets its war story to focus on the forgotten land that we wish it would forget about and get back to the war plot.

Doug McClure is Bowen Tyler, an American onboard a British ship, which is sunk by a German U-boat. He and the survivors in the lifeboats see the U-boat surfacing near them, and Tyler leads a daring capture of the U-boat led by Captain German-Name (John McEnery). In trying to flag down a passing British ship, they are fired upon – they’re in a German sub of course! – and must dive dive dive to the ocean bottom to escape attack. Sailing in wrong directions for days, they eventually come upon a subterranean passage that leads to the titular forgotten land.

Capt. German-Name speculates it is the lost world of Caprona (named by a fictional explorer who discovered it). One wonders why they don’t just turn around and head back out the same way once they discover they are in dinosaur land. But then it would revert back to a war movie, and become interesting again. (There is also some schtick about losing fuel, but later – before they get the chance to refine crude oil into fuel – they set sail to escape a volcano. How do they plan to escape with no fuel? Onward…

From the novel by Edgar Rice Burroughs, THE LAND THAT TIME FORGOT is an intriguing story, and they put a little effort into the drama of the war scenes. (A little. Let’s not get carried away.) There’s also a stormy moral ambiguity that colors both “sides” in this World War fracas. Susan Penhaligon is Lisa, a British biologist, who asks Capt. German-Name, also a biologist, how a man concerned with the structure of life and its motivations could be a U-boat captain, torpedoing her ship full of innocent women and children. He counters with the fact that the British ship was filled with explosives being transported to kill women and children in Germany. It has the desired effect, to shut her up, and I assume, also the audience of the mid-seventies, who must have been regarding the Germans as Pure Evil through the brainwashing practice of every country dehumanizing its opponents during war.

The war scenes are refreshing in that when Tyler (McClure) and the Brits have the sub under their command, they do not mistreat the Germans; in this cramped space, it is in everyone’s best interests to be cordial and respectful (besides shooting a few of them to show ’em who’s boss, of course!). And when the Germans retake control of the sub, they also do not mistreat the Brits. Even Captain German-Name’s threat of rendezvousing with a German ship that will take them onboard and shoot them as pirates, is conveyed in a very British manner, i.e. polite and articulate. 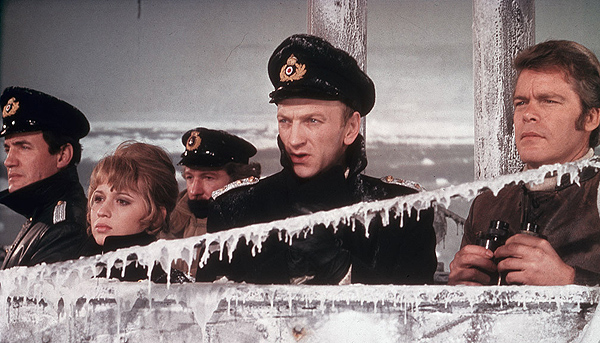 “Screw this, Captain. This land is too goofy – let’s go back to war.”

These are aspects of the film which almost raise it a notch or two; in one respect, we almost hope they never do encounter any dinosaurs. But then, our reverie is interrupted – by a rubber plesiosaur!

The shots of dinosaurs from afar are not altogether stinky (when taken in context with the times – they were obviously trying to save on money and time by moving away from stop-motion and taking a leaf out of Japan’s book of suiting up guys), but when the plesiosaur head is bobbing in and out of the same frame as The McClure, trying to hit it with an oar, it becomes quite obvious this is a puppet holocaust.

The Germans and Brits (led by Keith Barron as Bradley, and informally by McClure because he has the Biggest American Dick) form an alliance in this unforgiving land, except for one German lieutenant (whom we presume will love Hitler in the War to come). They witness dino battles (allosaur versus triceratops) and shoot-to-kill two innocent styracosaurs that were just roaring at them. They encounter a troglodyte named Ahm (Bobby Parr) who sells them Geico insurance, before he sacrifices his life for them by being snatched into the jaws of a pterodactyl. If it weren’t for the onerous editing, directing and model-work, this scene would have been really touching.

Lisa the biologist runs rudimentary translation for Ahm (oh, so biologists are also linguists now?) and comes up with wa-how concepts far outweighing anything he’s trying to convey with a few grunts and gestures. For the sake of movie runtime, the discovery of the evolutionary ladder progressing the farther upstream they go is condensed into a few lines. Ahm believes he will transmogrify into one of the more evolved Cro-Magnon men farther upstream, and Tyler incredulously says, “No, that can’t be,” as if Ahm’s “belief” makes it a truism.

Later, many troglodytes kidnap Lisa, and instead of ripping her synthetic furs off and procreating as Nature intended, they bat her around to each other. Even Ahm never expresses any desire towards this blond who must seem like a goddess of perfection to his kind. Who knew so many cavemen were gay?

To adhere to seventies adventure movie protocol, a volcano explodes, and the sub leaves Tyler and Lisa onshore, helmed by Latent Nazi yelling goodbye sarcastically. As Tyler and Lisa watch gape-mouthed from the blazing shore, the sub explodes and sinks – and they are trapped in the Land… Quite a brazen, tragic end, which also elevates the movie.

THE LAND THAT TIME FORGOT has very workable concepts and I really like the dynamic of the warring parties onboard the same sub, harboring a forced truce to survive the Land; and the Land itself is a scientifically wondrous concept. Ironically, time has not been kind on the one aspect dragging this movie down – the dinosaurs. The special effects that time forgot…