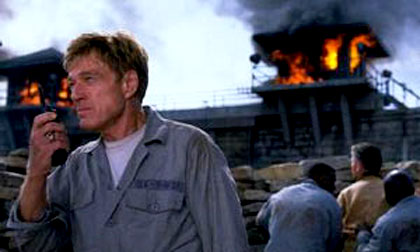 “Tell my agent the food hall goes next unless he gets me off this picture!”

THE LAST CASTLE was a good movie…until it got stupid. Then it was a stupid movie… until it got pillow-fartingly ridiculous.

A military prison. Warden: Tony Soprano. New inmate: highly respected and profusely-decorated 3-star general Robert Redford. Theme: Battle Theorist (Tony, who sports a collection of battle memorabilia, weapons, literature) versus Battle Veteran (Redford, whose field credits include the Gulf and other recent political coups which I pay no attention to). Premise: new inmate Redford takes a dislike to the way Warden Tony disses his marine and army peeps behind bars, so decides to launch a revolt, the prisoners rallying behind him due to his iron-fisted reputation and rakish good looks.

Redford starts slowly, employing the tactic of Keeping To Himself and letting the screenwriter make the requisite character stereotypes come to him: there’s Aguilar (Clifton Collins Jr.), the dim bulb; Yates (Mark Ruffalo), the amoral prison bookie; there’s the fallen-from-grace doctor, the big black guy, the big white guy, the big guy of uncertain ethnic descent and the token Latino guy. Redford coaxes The Patriot from this ragtag band of uncertain heroes, twisting Tony’s panties into cat’s cradles in the process. 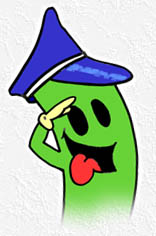 Saluting is not allowed amongst inmates in a military prison – something to do with loss of rank and lack of hairspray. But Redford’s clichéd one-liners evokes inmate-saluting soon enough, causing big trouble in Little Italy. This in turn leads to Redford’s punishment: to bare his virile, octogenarian man-torso (we’re talkin’ carpet-chest that makes Paul Stanley’s look like a well-tended bowling green) and to move a pile of rocks from here to there, all day and night. With his blond ambition and undeniable desirability to prison men of all persuasions, Redford turns this punishment into yet another spectacle with which to win over the tender hearts of his fellow crims.Redford also redefines self-esteem for prisoners: Aguilar stammers the series of events that got him arrested, which involved … “being a Marine fer four years and-and-and I made a mistake fer fuh-fuh-five miniss and I’m in here…” (The “mistake” was bashing in an officer’s head.) Redford’s expert assessment? “You were a Marine for four years and your mistake lasted just five minutes? Well, I guess that still makes you 95% Marine.” A regular Tony Robbins for Jailbirds.

By this criteria, we can safely say that the postal worker who spends twenty years behind a semi-attended counter, saying, “Do you want stamps with that?” and then spends ten minutes atop a rooftop sniping is still (salute) 95% All-Amuuurican Government Postal Worker. And the priest who devotes fifty years to his parish who is discovered with his bad habit billowing around the buttocks of a schoolboy is – by Redford’s Law – still [genuflect] 95% Man-Priest. All praise the Ape-Law of Robert Redford: thank goodness that incident with the duck butter and the power drill only took up four minutes of my life; I can hold my head up proud – I’m still 95% All-American Woman…

All the philosophy, chess-playing and tough love comes from the convicted criminal in this film – Redford – so the viewer is cajoled into rooting for the wrong side. The attempts at tear-jerking and patriotism and brotherhood are completely misplaced by the fact that this bake sale is held – in a JAIL. And these good guys are, in fact, the bad guys – they’re prisoners! When was the last time you supported a prison revolt, replete with murder and destruction of taxpayer property, cheering on the cons in their noble cause to usurp authority and kill aimlessly? …No, I didn’t think so.

Delroy Lindo (who six years ago played a gangster, with Tony as his bearish underling, suffering humiliating ass-kickings at the hands of the stoutish John Travolta in GET SHORTY) has now scored the B-role in this movie, time having turned these two actors’ fortunes around. Lindo is a General who is brought in by Tony, to talk sense to Redford, whose plotting and scheming ways are making Tony wonder whether he shouldn’t have just stayed in Jersey, overseeing The Bing with Sylvio.

For we who came to see Our Favorite Mob Boss bust a move other than his usual gansta rap, we were not prepared for the impotent swab his warden character turned out to be – even as a “character actor playing against type,” Tony was reined in to such an extent that even when the situation warranted explosive retaliation during the siege, he simply sulked about his crumbling office in a hissy rage, waiting for the prisoners to stop with their flinging rocks and running around burning things.

Redford conspires to use Tony’s own armaments against him; the water-cannon, the helicopter, the giant home-made slingshot (the wha-? This last weapon, the trebuchet, turned up out of nowhere, like Monty Python’s Trojan Rabbit, when the plot had degenerated to guys running around and burning things aimlessly, and the director thought no one would notice the appearance of a construct that literally could not be hidden anywhere on prison grounds – THE GREAT ESCAPE this ain’t!). Checkmate is to capture the warden’s American flag and fly it upside down, which denotes a distress signal – a concept which they make abundantly clear through the dialog of about twenty people. Yeh, okay – I heard you the seventh time – so if the American flag winds up flying upside down – relax! – nobody’s a terrorist or anti-American – sheesh!

To cap this farce with the seal of disbelief, these prisoners don’t even want to escape – they just want another warden, and are willing to undergo fatal, non-sequitur combat to force the authorities to overhaul that command position. I got news for you, guys: the warden may change, but the Job Description remains the same, i.e. it’s any warden’s duty to retain your low self-esteem, disorientation and dissension amongst yourselves and to KEEP YOU IN JAIL. (Anyone who believes that jail is to reform criminals should still be putting teeth under their pillow and waiting for 25c to magically appear.) Changing the management amounts to nothing more than amending the names on the office doors and letterheads. Of all people, you military perps should understand that in contravening The System’s laws, you yourselves have empowered The System to isolate you from it. You committed yourselves to protecting this System – and now you want to complain about the System you’ve been defending all these years? Yeh, jail sucks – it’s meant to!

The real prison system is, in fact, imperfect to a fault, and does more long-term harm than good, for a number of different reasons – but that’s another tale, best told when I’m drunk, naked and in handcuffs (I do my best work that way).

Warden Tony was not portrayed as inordinately cruel. Any acts of violence he perpetrated were enacted upon prisoners who were disobeying orders. Let’s look at the facts – firstly: they’re prisoners! A prison is not a democracy (at least – not the last time I was in one). Since when do we grant prisoners the expertise to diagnose anti-social or psychotic behavior in a warden? And if they don’t like the way the jail is run, since when do they have the inalienable right to overthrow it?

THE LAST CASTLE’s release date was slated for Oct 12th, 2001 and the original poster featured a muted-color American flag flying upside down atop a pile of rubble. The original slogan was: “No castle can have two kings.” This sombre ad campaign anticipated an intriguing, powerful movie… Then the World Trade Center fell down and – as much as the word “coward” was bandied about in relation to the Taliban – suddenly every full-blooded, flag-waving, quiche-nibbling American started displaying their cowardice by leaching all political incorrectness from their society. For all the media that childishly depicts Taliban fear of the war-wakened America, it is, ironically, America who is paying lip-service to unity and democracy and then fearfully falling back on the age-old ploy of suppressing anything that could possibly be construed as free speech. This movie’s backpedaling ad campaign was one such example. Not only was the release date put back, the Flag poster was immediately replaced by one which featured the actors’ faces over a battle scene.

Can anyone really apprehend the motivations behind the revamped marketing campaign? Why was the slogan changed to “A castle can only have one king” – because the “two kings” reference might remind people that “two towers” existed? Oh, heaven forfend! You might accuse me of nitpicking irrationally – welcome to the idiot mind of the Consumer Market Analysis Specialist (read as: Mediocrity Yes-Man). And was the release date set back so that the sycophantic film-makers could tack on “patriotic” scenes and a dumb ending to add to the general mortifying embarrassment of the whole affair? Probably…

In the final confrontation scene, Redford flashbacks to his Sundance Kid days, as a veritable army trains their rifles on him from the ramparts of the rec yard, waiting for the word from Don Soprano to bake his ziti. Tucked under his arm, Redford carries the folded flag stolen from Tony’s office, and word on the street was that he was gonna raise that puppy upside down, thereby broadcasting Tony’s incompetence to the Five Families. The grounds are decimated, the surveillance towers are razed, as is Tony’s office overlooking the yard, guards and prisoners have been killed, the water-cannon is nuts & bolts, the helicopter is toast. (Guys, guys – was it really worth all this effort just for a new warden? At least throw in an escape attempt and I’ll understand your fervor; but even if a new warden comes in today, you’ve still got to go back and sleep in your same old beds, except now they’ve been burned and urinated upon – well done!… you DOIKS!)

… And Tony faces Redford, staunchly: “Give me back my flag!”

Redford: “It’s not your flag.” Ouch! – that was so patriotic, it made my thighs supple. As the whole prison watches, Redford turns, walks to the flagpole resolutely (as Tony is screaming into his comm to shoot him down no matter how impressive his senior-citizen man-torso was) and starts raising the flag. Of course, that carpet-chest affected more than just myself and the other men in the theatre – it also affected each trained sharpshooter rifleman who surrounded Redford that day, and whose dreams were now rife with frolicking in that snowy-white chest-jungle with the blue-eyed avenger-general who defied a mob boss. They lower their weapons – and it is up to the only sane person in the jail to shoot down Boy Redford, in the back – Tony Soprano! Of course, he is arrested immediately by his captain; something to do with The Law – The Law which they suddenly want to adhere to, after not giving it a moment’s thought during the last hour’s siege. 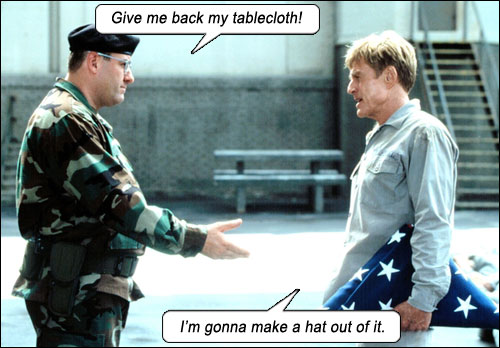 …And the camera pans up the flagpole and the flag is flying, proud and true – RIGHT SIDE UP. And the convicts salute it. And the guards salute it. And the music swells, as Redford dies with a wry smile, flag fluttering in battle-smoke breeze, cheese glutting all Exit doors…

Probably the best advice one could offer to someone contemplating viewing this movie is advice that Tony Soprano might be inclined to give – Fuggedaboudit!