This movie’s predecessor, THE LAST EXORCISM (2010), had a great hook: an exorcist who knew he was only placating the superstitious with his staged exorcisms, but if it helped the redneck families who believed this guff to regain their lives, it was beneficial – until he ran up against a real demon.

THE LAST EXORCISM PART II throws all that grounded storytelling out the window and eschews the “found-footage” format to spin a tale of real horror – horror that any studio would outlay this amount of money on such a turd when kids are still starving in Africa. 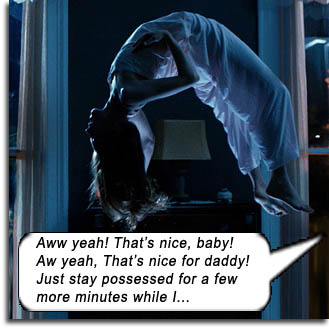 Possessed Nell (Ashley Bell) appears to a New Orleans couple in the movie’s opening – and only hair-raising – sequence. She is subsequently placed in a girl’s home, where “disturbances” ensue: visions of her dead father, other girls suffering convulsions, a baby crying on the other end of a phone line, and soon enough, Nell is floating off the bed, bent over backwards in that double-jointed manner that we men find so attractive.

(Is it just me, or does this chick, who is meant to be a teen, look 40? She has those unfortunate facial features where we can “see” the old person she will become. Maybe it’s the devil inside her?…)

As in the last movie, Abilam is still the demon trying to possess Nell. (A distant relation to Whoa-oh, Black Betty–Abilam! Whoa-oh, Black Betty–Abilam! Black Betty had a child–Abilam! The damn thing gone wild–Abilam!…) A psychic tells Nell, “I think he loves you. And he’s powerless without you.” In response to Nell beseeching, “You can’t help me?” the psychic’s very next line is literally, “No, he’s too powerful”! Hang on! Lemme clean out my ears – didn’t you JUST say – I mean like one-point-five seconds ago: “he is powerless without me”?

Obviously writer-director Ed Gass-Donnelly and co-scripter Damien Chazelle didn’t even proof their own script. And how lazy does that make the Script Continuity Supervisor?

Spencer Treat Clark is the shy boy trying to court Nell. The demon inhabits him pretty easily. Like it inhabits every other chick and priest and passing New Orleans partygoer. What’s different in Nell’s constitution that the demon can’t get into her? A belief in self? A belief in God? Magic Mormon adamantium underwear?

In trying to escape the demon, Nell visits the absolute worst place to actually try to avoid evil – a church. So it’s no surprise the demon easily follows her in there, having already possessed the priest (i.e. the moment he became one), and then sending blackened minions to storm the walls. Devil stronger than God? If you believe in both, then the devil has always been stronger than god. That’s why you FEAR him so.

In a movie where everything is designed as a failed jump-scare, the crazy illogical storyline beats us about the head with stupidity after stupidity. The psychic says, “Once he overtakes you, he’ll be all-powerful.” But he’s all-powerful now! It can kill anyone it wants to, it can defy church walls, it can levitate objects, pretend to be her father, her boyfriend, her roommate; it can blaze past “protection signs” drawn on walls… But what is its endgame? WHY does it want to possess Nell? It demonstrates that it can do anything it wants to do, and it’s using its limitless power to terrorize a stringy little chick?

So irrelevant, no wonder God is looking the other way.

In THE LAST EXORCISM, the title described the fake preacher’s intent: Nell was to be his “last exorcism” before turning his talents to other pursuits.

In THE LAST EXORCISM PART II, the title makes as much sense as RAMBO III (because there was no RAMBO I or II). Firstly, there’s no “exorcism” – what is staged as an exorcism is an attempt on her life. And there was no “exorcism” in the first movie either, just the pretense of one. So if there has never been any exorcism associated with Nell, how can there be a “last” one? And then how can there be a Part II to something with no Part I?

I sincerely hope these people believe in Hell, because they’re all going to it.