Here There Be Redneck Demons.

You might be thinking, as I did: ‘Girl possessed by devil?’ Seen it. ‘Bent over backwards in nightie?’ Seen it. ‘Speaking in tongues?’ Seen it. But THE LAST EXORCISM is a refreshing take on the old staple of possessed young girls and the preachers who love to exorcise them. It’s not in any way a revolutionary film, but it offers a slightly different angle on that ole debbil business. 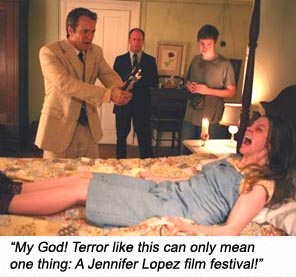 Shot in pseudo-documentary fashion, THE LAST EXORCISM follows skeptic evangelist Cotton Marcus (Patrick Fabian), called in to exorcise the mandatory possessed young girl. He goes through the motions with his charlatan devices (smoking crucifix, fishing wire to make things move, hidden speakers equipped with demon sounds, etc.), his theory being that if people believe their young girl is possessed by demons, then an exorcism – even a fake one – would make them believe she is cured.

But then – ulp! – we find out the young girl really IS possessed…

Cotton was once fiery religious (yelling the energetic sermons, pronouncing “God” with the emphasis on the ‘D,’ “curing” people on the altar), then realized his “faith” had foundered when his young son was cured from a near-death ailment and he thanked the doctor before he thanked GoDD. The last straw was the Pope opening an Exorcism Academy, Cotton figuring it was time to expose the archaic practice for the fakery it was, before another young boy ended up, as he had read, with a suffocating plastic bag over his head in an ignorant attempt to drive out demons.

So on what is to be his Last Exorcism, Cotton travels with a film crew (a cameraman and producer) to a farmhouse in Down-South-Hicksville, answering the plea of yokel father Louis (Louis Herthum) to exorcise his young daughter Nell (Ashley Bell, who is supposedly 14 but looks 38). On the dusty road to Louis’s farm, Cotton’s exorcism party encounter Nell’s brother Caleb (Caleb Landry Jones) and suddenly we’re in DELIVERANCE.

Cotton secretly plants his props in the exorcism room, “educating” Louis from an archaic book with medieval European pictures (you know the type – they’re in every demon-themed movie – more pictures than text, yet taken Very Seriously), identifying “Abilam” as the offending demon inside Nell, who “coils himself like a serpent around the soul of the individual, which accounts for the fluctuation in temperature.” How coiling around the soul of someone affects temperature, we’d have to consult the Dial-A-Fundamentalist-Redneck hotline. Then he puts on his Max von Sydow show amidst shrieking confusion, “drives out the demon” and gets paid, thinking he has “proven” yet another case of imaginary craziness cured by faith in fake gods.

From being comedic (in the yokels taking it all Very Seriously) THE LAST EXORCISM edges into BLAIR WITCH territory, taking a chilling turn when Nell is found sitting on the bed in Cotton’s hotel room that night, in her nightie, blank expression on her face – a room miles away from the farm where they just left her; a room that Cotton didn’t tell anyone at the farm they would be at. Nell is disoriented, vomiting, and Louis does the right thing in taking her to a hospital. Which her superstitious father promptly takes her out of and confronts Cotton on what went wrong – with the exorcism!

TV actor Fabian brings a mighty believability to his Louisiana reverend Cotton Marcus (love it! Why are all southern preachers named Cotton?), oozing snake-oil salesman with his preened look, fast tongue and shyster manner. The naturalistic acting from the ensemble cast is noteworthy, especially Caleb Landry Jones who looks and behaves like he’s straight out of cousin-dipping country.

Directed by Daniel Stamm and produced by Eli “Bear Jew” Roth, there are some genuine scares – such as Cotton’s crew in Nell’s house at night, hearing upstairs in Nell’s room, a baby crying! Oh, now that raises the frightful hairs all over my little cucumber body. Then there are movie moments where the film loses authenticity, when we see how dutifully the cameraman shoots establishing shots even in the direst of circumstances; or when the orchestra stabs accompany jump scares. (Orchestra stabs? Which editor took the time to gussy up this supposed “found footage” documenting a case of a fake exorcism gone horribly wrong?)

Unlike forced hoaxes like THE FOURTH KIND, THE LAST EXORCISM doesn’t lay claim to being “Based on True Events.” It simply plays out for us, and those with a propensity to lionize Larry the Cable Guy will think it’s true anyway.