Ingmar Bergman is spinning in the last grave on the left…

What pisses me off about THE LAST HOUSE ON THE LEFT is that nowhere do the filmmakers mention – not in advertising, not in screen credits and not even in the Special Features on the DVD – that this movie is ripped straight from Ingmar Bergman’s THE VIRGIN SPRING (1951, aka JUNGFRUKÄLLAN). 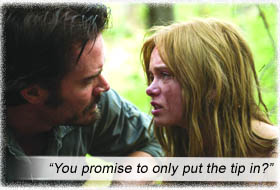 Instead, director Dennis Iliadis decides to give screen credit to Wes Craven, who created the “original” LAST HOUSE ON THE LEFT in 1972: “Based on the story written and directed by Wes Craven.” No, it’s not. The story of villains who molest a young girl and then seek refuge unknowingly in the house of that girl’s parents was written by Ulla Isaksson. Craven rewrote the story to pander to American bloodthirstiness.

Bland Tony Goldwyn and blander Monica Potter are the parents. Sara Paxton is the virgin teen – so slim, smooth, innocent and sexy, only one thought crosses our minds: she just has to die. Martha MacIsaac (cutie Becca from SUPERBAD) is the pot-smoking teen friend.

Garret Dillahunt (looking like the sperm-child of Jason Patric, Rob Lowe and Dennis Miller) is the villain; his vaguely lesbian-goth chick, Riki Lindhome (who knows how to please viewing audiences by getting her cans out constantly); his teen son, Spencer Treat Clark (GLADIATOR, 2000), who is sickened by his father’s crimes and beaten for being so “unmanly.” Aaron Paul is Garret’s partner in crime.

Whereas Bergman’s film focused on the STORY, Iliadis’s film – like Craven’s before it – focuses on the GORY. Here, the parents of the molested child turn into the monsters they despise. In Bergman’s film, the father (Max von Sydow) dispatches the villains quickly and efficiently, like a god come to life, exacting justice; in Iliadis’s film, there’s mangling and bashing and stabbing and a claw hammer to the skull and microwaving someone’s head gratuitously – in effect, the parents become the “slashers,” an ironic twist on the teen-slaying genre.

In Bergman’s film, the father also kills the young kid in the gang of villains, who did not participate in the crime, but was an abettor for doing nothing to stop it. That was powerful stuff. With the gutless MPAA breathing down America’s neck, it is absolutely no surprise that young Spencer Treat Clark is spared here.

There seems to be no storyline in this movie, outside of Isaksson’s blatantly plagiarized premise. Isaksson’s story is altered by having the raped daughter somehow crawl back home, rather than her friend. And then a tenuous allusion to THE VIRGIN SPRING when the family realizes the quickest way to rush her to hospital is upriver by boat. But they can’t find the boat keys!

The script might have been just ten pages long with the amount of padding onscreen – the rape scene itself goes on and on for so long, it’s as if the director and editor just sat there touching themselves and letting it run. It’s not even tragic after a certain point – it’s just hot.

Further evidence that these filmmakers are just trying to gross us out: the father is a doctor; while he is putting stitches in a man’s nose, they have a blackout. The father takes a giant flashlight and – instead of shining it on the guy’s nose to finish his needle stroke – goes outside to fix the circuit breakers first, leaving the needle sticking half-through the nose. Some kind of doctor!

There is no characterization, no character arcs – the only throughline seems to be “trying to find the boat keys.”

This story opened deep, dark questions about the human condition: how far will you go to defend your loved ones?; how sweet can revenge be if you have to stoop to the level of the villains?; can you go through with taking a human life at all? And where the hell are those boat keys?! There is one scene where the father and mother exchange a glance that is laden with these unspoken conundrums, while they kill one of the villains… by mangling his hand in the sink and sticking a claw hammer in his head. Guess they figured the answers.

Then those questions get replaced by bigger ones, like “Where can I get psychiatric help?” as the father seems to slip into the Teen Slasher Movie world himself when we see him cutting open the ringleader’s back to sever his spinal column in order to paralyze him from the neck down, and then – while the ringleader is conscious – stick his head in a microwave and set it on high. Now that’s just plain wrong! Everyone knows the setting for human head is two minutes on ‘medium.’

It is a complicated, time-consuming procedure and we cannot quite tell chronologically when the father performs his insane little operation, but consider: if he did it BEFORE he rushed his raped daughter to the hospital, he is crazy; if he did it AFTER coming back from the hospital, he’s still crazy!

And the moral of the story is: Remember Where You Put The Boat Keys.