While watching this movie, comparison between the mad past President of Uganda and the mad current President of America becomes unavoidable. This review somehow skews into that of full-blooded political rant somewhere east of crazy town, where Cheney and Rice enjoy peaceful Middle Eastern town strolls with John McCain in Kevlar vests. Apologies.
– Poffy the Cucumber. 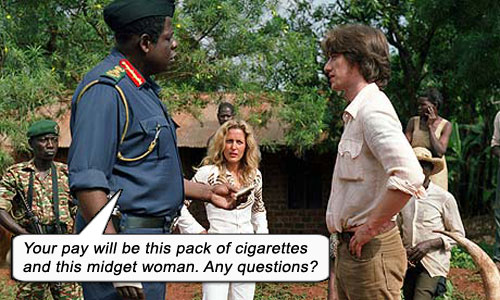 No art is possible without a dance with death.
– Kurt Vonnegut, “Slaughterhouse-Five,” paraphrasing Céline.

Don’t know about you, but Forest Whitaker scares the shit out of me.

And as Ugandan dictator Idi Amin – fuggedaboudit! I had to watch THE LAST KING OF SCOTLAND from the safety of a toilet.

From Giles Foden’s novel, director Kevin Macdonald scares up a visceral feast, dripping searing fat into its blood trays; a scary fictional tale about a scarier real dictator; a killing machine responsible for almost as many premeditated deaths during his reign as America’s 43rd President.The tale is told from the point of view of fictional young doctor, Nicolas Garrigan (James McAvoy, reminding us of Ewan McGregor with that Scottish accent and those pretty, pretty eyes), who, after his graduation, jaded with his proper Scottish upbringing and too-familiar career pathway, decides to practice in Uganda on a whim, arriving in the African country just as Army Commander Idi Amin seizes power from Ugandan President, Milton Obote.

After a sensual interlude with a smokin’ Gillian Anderson as a married field doctor, Nicolas, by chance, tends Amin’s hurt hand, surrounded by Amin’s itchy-trigger-fingered guards (real life Ugandan militia, whose onscreen non-acting expressions reflect their regard of Whitaker as a kind of Amin reincarnation). When Nicolas grabs Amin’s gun and shoots dead the noisy crippled ox responsible for Amin’s accident (because it would not stop lowing) for Amin, it is love at first kill. When he discovers Nicolas is Scottish – a nationality he has an affinity towards – he bonds with him in a surreal exchange of sweaty shirts.

Soon Nicolas is entrenched as Amin’s personal physician, wooed and whirlwinded into the inner sanctum as his most trusted aide. Thrown into the presidential high life with tailored suits, a luxury apartment and unlimited vicarious power, Nicolas finds it increasingly harder to recall his earlier, nobler aspirations of helping the underprivileged of Uganda – and the gift Merc doesn’t help at all…

Now I don’t want to sound too apologist for Amin, but even though the movie shows us his mood swings (courting Nicolas with purring velvet, as is the devil’s wont when seeking our sympathy, or torturing of dissidents and voicing disapproval with aides who soon turn up missing or dead), the movie itself acts as apologist by giving us some small indication of how and why this ferocious leader might have had to live by the sword. To dismiss someone as a “madman” is a prejudice that allows our Western sensibilities to cope with a bloodthirsty idiom far removed from our mollycoddling.

This movie goes further than most dismissive media (even allowing Amin to shed a tear whilst meathooking his pal’s pecs!) but, being a movie, it cannot deal with every pertinent point. It seems like Amin’s coup came out of nowhere, but his rise to power was the result of the British army bequeathing him military might; after gaining his own political legs, Amin eventually assumed enough arrogance to confer titles upon himself like “King of Scotland” and “Lord of all the Beasts of the Earth and the Fishes of the Sea” (almost as dumb as “the Decider” or “the Purveyor of God’s Will”) and the audacity to declare sovereignty apart from British rule and to offer himself sexually to the Queen.

Amin’s manner of dictatorship and justified paranoia was denoted by the bloody times he lived and operated in. Realizing that his own Presidential post would probably be snatched from him as he had snatched power from the previous President would explain his preemptive killing of dissidents, rationalizing that he was killing opponents to his most excellent form of government – he promised roads, schools, health care (the same promises every leader makes and breaks, “I am just a soldier with a concern for my country and its people”) – torturing and terrorizing his rivals “for the good of the nation.” Much like the current murderous dictator of America rationalizes his cold-blooded genocide as “spreading democracy.”

Nicolas is not exempt from Amin’s rages and disparagement, ultimately seeing himself as complicit in Amin’s atrocities; having medical access means he could have killed Amin at any time and stopped innumerable deaths. Bedding the youngest of Amin’s wives, Kay (Kerry Washington, whose bangin’ butt is a sight to behold) makes Nicolas’ situation even more sticky. In a disturbing scene which will haunt your brain corridors forever, Nicolas finds Kay’s body dismembered in a dripping hospital back room, with her arms stitched back on where her legs should be…

A splendid type and a good (rugby) player, but virtually bone from the neck up, and needs things explained in words of one letter.
— another former British commander.

When a sniveling British envoy (Simon McBurney) convinces Nicolas to attempt a medical assassination, we are reminded of Kevin Spacey’s dread in THE USUAL SUSPECTS (1995): “When you shoot at the devil, what if you miss?”

At 6’4″ the real Idi Amin Dada (1920s – 16 August 2003) was a fierce, imposing bullroarer – and 6’2″ Forest Whitaker captures the charismatic force of nature that Amin purveyed; it is easy to see how his people admired him as a patriotic, compelling leader: “We are a proud African nation living in peace and economic power!” Whitaker’s channeling of Amin is constantly foreboding and absolutely magnetic (and his lazy eye makes up in ker-raziness for those two inches of height) and though McAvoy pulls off a tremendous job as Nicolas, we cannot take our eyes off Whitaker.

By neglecting Britain’s role in Amin’s rise to power, the movie misses the analogy to America’s checkered and blowback past (“blowback” – CIA term meaning “unintended consequences of covert operations”). Britain’s enabling of Amin was much like the American government providing arms to Osama bin Laden and Saddam Hussein, until those ambitious leaders “democratically” opted not to sycophant themselves to America anymore and rebelled against snide U.S. foreign policy, at which point America scratched its head and asked, “Wha happuh?”

And all the talk of 300,000 people being murdered during Amin’s reign should be tempered with the murders accrued by America’s 2000’s dictator: as a result of 2003’s “Operation Enduring Freedom” (the Pentagon’s euphemism for the “war on terror,” itself a euphemism for United States foreign policy that dictates it gain control of Iraq’s energy resources in a manner that has nothing to do with freedom or democracy) nearly 800,000 people have been killed, and over 1.5 million injured in Afghanistan and Iraq. (Figures compiled from British medical journal The Lancet, the Washington Post, the US Dept of Defense and CENTCOM. References.)

Amin may have butchered his enemies more directly, but what can be said about a coward attacking a country who is NOT EVEN HIS ENEMY and slaying them through buffers like a gutless cur? Witness the increasing video footage from war-torn areas of parents carrying their limbless children through rubble, cursing America through bloody spit. That “Butcher of Uganda” looks more and more like a pansy when compared to the ignorant, sociopathic monster that lives in our midst. At least when Amin dressed in full military regalia he wasn’t PLAYING PRETEND.

Wikipedia has this to say about Amin: “His reign was characterized by human rights abuses, political repression, sectarian violence and ethnic persecution.” Sound like someone familiar?

Forest Whitaker may be scaring modern Ugandans portraying a demonic dictator from the 70s, but what should REALLY be scaring the shit out of modern Americans is the truly insane, two-term dictator-president, George W. Bush.