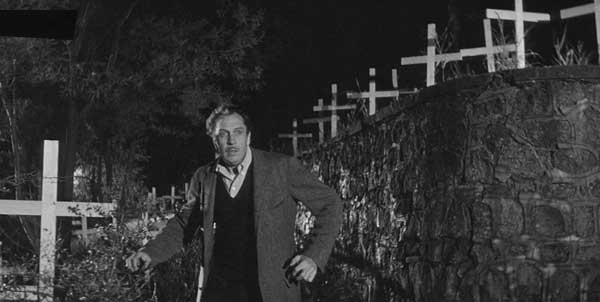 Vincent Price looks terrified as he leaves the graveyard to enter normal society.

The Last Acting Class On Earth.

Vincent Price indicates his way through what should be a chilling science fiction actioner, as THE LAST MAN ON EARTH.

From the 1954 book I Am Legend, by Richard Matheson, this movie about the last immune survivor of a worldwide plague fending off vampire-like creatures had the potential to be a social hammer, at the very least a throat-gripping thriller, but its execution is about as incisive as walking around in wet socks.

It was even screenplayed by Matheson himself, who felt that director Sidney Salkow made such a hash of his story that he removed his name, crediting himself as “Logan Swanson.” Produced by Robert L. Lippert (in retrospect, we can see another big problem in that name, but I’m sure Lippert must have had some cache back in his early days), who promised Matheson that Fritz Lang would be directing, when Salkow was eventually hired, Matheson quipped, “Well, there’s a bit of a drop!”

From its opening titles that bash us with untamed orchestration, to its uneven audio and haphazard looping, to its weak montage overlays of Price unconvincingly hammering stakes into the chests of “vampires,” to the insipid performances and absolutely atrocious editing, LAST MAN ON EARTH is a stab at classic cinema gone horribly awry.

Vincent Price is Dr. Robert Morgan, narrating his mundane life; waking day after day, three months alone, burying the dead, garlic on the door, mirrors to deter the undead creatures, wooden stakes that he carves himself, eating dispassionately, getting supplies, avoiding the night. Meanwhile, the orchestra seems to be watching a chase sequence.

In a flashback, we see Morgan’s idyllic family life, his role as a scientist first hearing about the European plague, carried by bacilli; his experiments trying to isolate a cure; his family dying, his friends tipping into insane. It is during these moments of high anxiety that we notice the pedestrian performances.

Morgan’s young bedridden daughter calls out, “Mommy, I can’t see you! Mommy, where are you?!” and Morgan’s wife Virginia (Emma Danieli), who is right by the bed, never answers her daughter, but asks Morgan instead, “Oh, what do we do?” Well, first, calm your daughter, idiotwoman! Morgan (who also doesn’t comfort his daughter) tells Virginia, “Blindness is a stage in the disease.” And daughter implores once more. And Virginia and Morgan never answer. They treat this kid like a stranger in their house; at no point are we ever convinced they have a daughter in peril. I mean, I understand this is an Italian production, and maybe there is a cultural translation problem – but wouldn’t any human just answer their kid?! These non-human reactions start to litter the film from this point. Because I think the actors are being called upon to mine emotions they have no idea how to access.

For instance, imagine the trauma of chasing after the dump truck that just took your dead daughter. Vincent Price can’t imagine that either. He half-heartedly grabs at the wrapped human parcels the garbage men are unloading into a fire pit. The men push him off, but they don’t have to try too hard, as Morgan isn’t even putting minimal effort into the struggle. It’s like he’s fighting for a hat or a place in line, rather than his dead daughter.

Then when he gets home – keep in mind he has just seen his daughter tossed into a mass grave – he first makes coffee, rather than immediately going to his wife, to see how she is coping, or just consoling her. Only when he hears Virginia scream does Morgan half-trot into the bedroom, to find her lifeless form on the bed. Which he doesn’t rush to, but rather, walks slowly towards. His reaction seems more like someone running out of gas than finding a dead wife. “Oh… no.” Again, at no point do we ever feel like these two are married; more like mild acquaintances sharing a house. Thus, we feel absolutely no empathy for this guy. Even when he weeps over his wife, he is not hugging her close, she is crassly splayed on the bed and he keeps his body as far away from her as possible.

Are we meant to see some kind of resolve on Morgan’s face when he tells Virginia’s dead body he won’t bury her in the mass grave? Because we don’t see anything. Morgan buries her in a grave he digs himself.

Friend of the family Ben (Giacomo Rossi Stuart) is even worse at emoting; any wonder he ends up as a slow-moving, plank-wielding vampire?

One truly chilling moment is when Morgan gets home from burying Virginia, and he hears a hissing at the back door. Someone is out there. He opens it. It’s his wife! Disheveled, dirt-smeared, she shuffles toward him, repeating his name. The hairs rose on my little cucumber arms.

That’s when Morgan decides he has to stake and bake all the “undead.”

The hunched monster lurches toward the woman—oh wait, that’s our leading man.

Maybe cultural norms have moved too far for me to discern, but I think writer Matheson wanted to leave the theory open as to whether the victims of the worldwide plague were actual “vampires” in the traditional sense. So Morgan is that scientific voice that posits a plausible “blood disease” for their condition – until he too must admit that garlic deters them, they violently avoid mirrors and daylight, and they are clinically dead – all traits of traditional vampires. So maybe the theory was closed? At that stage in cinematic history, vampires held more cred than zombies, so I guess vamps it is.

All I know is: they’re not really lethal, more of a discomfort, as Morgan finds himself in a church one night after sundown (presumably visiting the coffin of his wife), and must push his way through the vamps. Yes, I said “push” – that’s all he does; as they swarm him outside the church (and our accumulated knowledge of vampire lore and vampire movies leads us to believe he will be violently attacked) he merely pushes them out of the way to get to his car, then he drives home, and pushes them out of his way as he opens his front door.

All this time we were sympathizing with Morgan having to endure the constant noises outside every night, thinking the vamps were trying to break in to kill, torture, maim, or eat him. But they aren’t so bad! Turns out they’re just like strangers on a train. If they get too close, just push ‘em away!

The frame is not so much atmospheric as badly shot, day-for-night. In a rare daylight moment, Morgan comes across a lone uninfected woman, Ruth (Franca Bettoia). (An unintentionally funny scene as the obviously stooped 53-year-old Price chases down this obviously fit 28-year-old.)

Ruth turns out to be from a city of infected people who have found a stopgap drug; she tells Morgan that the black-turtlenecked men of the city are coming to kill him. “You’re a monster to them! You’re a legend in the city, moving by day instead of night. Many of the people you destroyed were still alive – people from my group…” (But – Ruth, aided by the drug, was moving by day as well. What’s so special about Morgan “moving by day”?)

Vincent Price seems to shrink into a stooped hunchback as he argues with Ruth during the final scenes, his voice turning into that of an Igor. His theatrical acting up to that point was mildly in check, but he seemed to fall into some cheesy safe space for the climax.

And the final chase sequence is a total cringe; a quick wrap for the movie title to make sense. Pursued into a church (was this meant to be symbolic? We truly can’t tell with the dire film-making) the turtlenecks spear Morgan on the altar. He cries in defiance, “Freaks! You’re all freaks! I’m the last MAN on—“ Dies.

I get it – he was a “pure” man, not stabilized with drugs. But what I don’t get is: Morgan and the turtlenecks are on the same team, all trying to stay alive by any means necessary. Why are they so enraged at him? Why can’t they send an emissary – like they just did – to warn him that he is killing semi-cured people, and to alert him to the almost-completed drug, and could he help them with his scientific skills?

Ruth runs to Morgan, who dies in her arms. She walks away, expressionless. A baby cries. End titles. Italian art-cinema. The last meatballs on Earth.