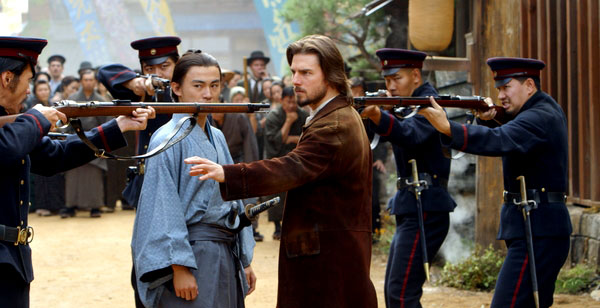 I love sushi. I also love Toshiro Mifune. Guess that makes me a prime candidate for a samurai warrior – at least, that’s all it seems to take for a Westerner in this movie to wear kamishimo and wield katana. Despite that conceptual annoyance, this film does craft a sincere portrayal of an outsider undergoing an assimilation into Samurai culture without Western disparagement or cheap stereotype satire. THE LAST SAMURAI is a grandiose film, sweeping, majestic, inspiring – even WITH Tom Cruise in it.

I am always torn on how to approach films of this ilk; as “historical document” or “man-toy blockbuster”? Ultimately, in attempting to fully appreciate the nuances the filmmakers are trying to impart, I ford this conundrum by spending way too much time researching history and not enough time writing punchlines. I hate myself for my thoroughness.

Thusly – so my research informs me – the late 1800’s saw Japanese businessmen (besotted with Western commerce), convince the Imperial rulers of Japan that the shogunate government and its military rule through shogun and samurai (bakufu) was outdated, and hindering Japan’s financial and technological advancement. To transform feudal Japan into a modern nation, it was necessary to hire Westerners to train their dark age armies in the Way of the Gun. 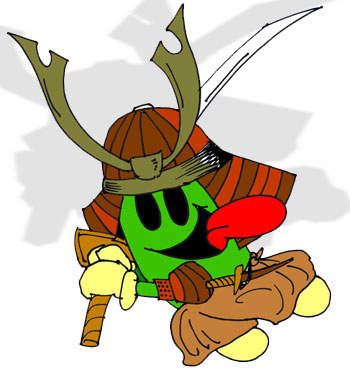 As imbecilic as that may sound (bringing haughty Yankees into a milieu where blade technology had attained a zenith in construction and killing prowess in the hands of the samurai millennia before the Americas were a twinkle in Europe’s eye), the gun did historically overrun the sword as the primary weapon of warfare in Imperial Japan. (We recall Leon’s assessment of weaponry in LEON: long-range rifle for amateurs, knife for a professional; illustrated by simply viewing the honor codes, demeanor and discipline of the blade wielders as opposed to the disheveled and dishonorable rabble populating the gun-toting military.)

This flensing of bakufu came to a head during the reign of Emperor Meiji, by all accounts as naïve, indecisive and ignorant of the best political path for his country as he is portrayed by young Shichinosuke Nakamura in this movie. THE LAST SAUMRAI’s plot centers around one last village of renegade samurai, led by Katsumoto (the leviathan Ken Watanabe, out-acting the movie’s titular “star” by acres), obstructing the Way of the New Government, embodied by Meiji.

Katsumoto was once Meiji’s respected tutor, which compromises Meiji’s decisiveness in annihilating the samurai. During one of their meetings, when Katsumoto accuses the Imperial house of being swayed by Western capitalism, Meiji retorts, “If we are whores, the samurai made us this way” – a notion also intimated in Kurosawa’s SEVEN SAMURAI when Kikuchiyo (Toshiro Mifune) blames the samurai themselves for making the farmers distrustful of warriors, due to the samurai penchant for accruing land and power as payment for their service (samurai means “to serve”), ultimately gaining political and military primacy. To this day it seems the very people we empower to protect us, attain a level of supremacy over us through the very strength that is the essence of their utility.

To combat Katsumoto’s outlaws, Meiji’s CEOs rescue a burned-out lush of a Civil War vet, Nathan Algren (Tom Cruise), from his Dudley Moore ARTHUR impersonations, to train their “modern” soldiery, a conscription of weaselly, panty-wetting nerds, whose ineptitude in battle rivals that of STAR WARS stormtroopers who trip over twigs and knock themselves unconscious when chased by Ewoks.

Ergo, it is no surprise when Algren’s Benny Hill-ian troops are decimated during their first battle, Algren being taken alive as Katsumoto’s prisoner.

Through the winter months, Algren is imprisoned by the natural isolation of the samurai village. Ostensibly to learn of his enemy’s tactics, Katsumoto engages Algren in philosophical conversations, whereby Algren – begrudgingly at first – comes to learn the Way of Bushido, the samurai honor code, embracing it with a passion when he finds it fills the vacuum in his guts that had turned him to the Way of Dudley Moore’s Arthur. In being an American soldier, he found only shame where he thought there was honor (when ordered to kill women and children); now, in this most unlikely place – the village of his enemy – he is startled to find honor once more in Bushido.

It is during this powerfully moving second act that the movie simultaneously excels and fails: excels because of its quietude, its controlled passages defining Algren’s recapturing of his humanity lost – and fails because Algren becomes too adept too quickly as a samurai swordsman. There is foreshadowing that he is a marksman and like most Civil War officers, he is issued a saber, yet all it takes is one ROCKY montage and he is besting his fencing tutor, Ujio (Hiroyuki Sanada, who bears a marked resemblance to Toshiro Mifune, so was aces in my book from the get-go – giving Tom Cruise a beating with a bokken in the rain upon their first meeting only increased his net worth).

It would have been enough that Algren embrace the creed and find “life in every breath,” but in following the Bushido For Dummies handbook and having Algren become a master swordsman in the space of one winter (and mastering the language to boot), the film unconsciously adopts the superior Westerner stance that it fooled us into believing it was trying to avoid, thereby cheapening the lifelong devotion, dedication and discipline of true samurai.

Algren’s expertise is demonstrated as he battles side by side with Katsumoto and his warriors against ninja assassins. In this fiercely-staged, dynamite battle sequence, viewers may spring a lone tear for the level of loyalty that Algren has unwittingly attained for his captors – but are we really buying that he can hold his own against ninjas trained to be assassins from the cradle?

It is Algren’s immersion in samurai culture that begs the question of who the eponymous “last samurai” actually is. In the final battle scene, Katsumoto and Algren are the last two “samurai” lying wounded. Katsumoto asks Algren to give him a good death, leaving Algren as the last warrior alive representing the samurai village. Would it be too easy to assume that Katsumoto was the “last samurai”? Are the filmmakers trying to be too clever-clever in metaphorically bestowing that honor upon the white devil, Algren?

Vainglorious Yankee spirit triumphing once again – cross-culturally no less, when in reality, most white Americans cannot even master their mother tongue, let alone a philosophical, physical and linguistic overhaul into a culture far superior to their Way. From a country where any kind of dedication to a discipline is disparaged; where collective bone-laziness has created such “time-saving” devices as the salad shooter, the leaf-blower, the workout video and exercise machines that end up as clothes racks – THIS is the society whom we are meant to believe can send one of its flock into the heart of a millennia-aged culture and assimilate it in one winter?

When Algren is delivered back into “civilization,” he finds he cannot re-assimilate into the shameful dishabille of his own people, so allies with the samurai against his own army.

An unnecessary romance blossoms between Algren and the wife of the warrior he killed before being taken prisoner. Though it might be construed as Algren attaining such a level of respect that the warrior’s widow is now considering him fresh meat (when once she considered him as smelly as a pig, bringing disgrace on her house), the real reason why these two are the last characters onscreen giving each other meaningful glances is because this film sports a bankable Hollywood Man-Toy which necessitates a gratuitous romance for the chick demographic.

Director Edward Zwick and writers John Logan, Marshall Herskovitz and Zwick himself might have forged a 10-Cukee movie had they not made Algren such a superlative warrior and then opted for Hollywood Happy Ending protocol. Zwick steers it so close to immortality, then insults us by painting-by-numbers.

With a supporting cast including Masato Harada, Timothy Spall, Billy Connolly and Tony Goldwyn, performances are stellar (yes, including Cruise’s – Zwick must be given due credit in achieving the mission impossible of extending Cruise’s acting range beyond the One Glib Expression method).

Still, watching a samurai film without Toshiro Mifune is like eating sushi without fish.