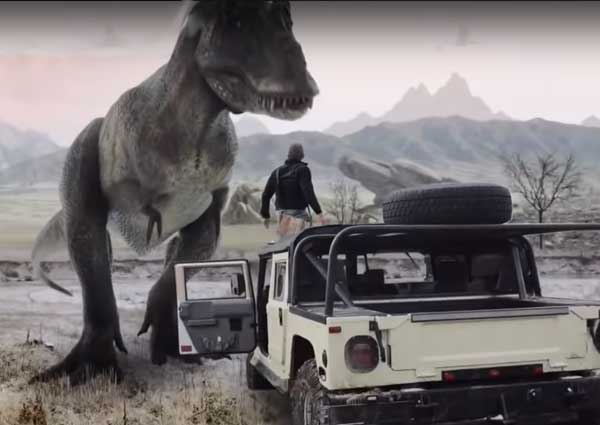 The effects are so realistic, it’s uncanny!

THE LAST SHARKNADO: IT’S ABOUT TIME is about the first sharknado, and how Fin the shark hunter travels back to prehistoric times to stop it, thereby negating all further sharknadoes and saving the planet from having to witness the bombastic mindlessness of any SHARKNADO movies.

He fails. Because obviously this is the sixth SHARKNADO shit sandwich. And whether it’s the first or last, it’s about time they stopped cheapening the human species with SHARKNADO releases, and put a bullet through the head of this exploitative, intelligence-depleting franchise.

Ian Ziering continues the burial of his film career by starring once again as Fin, who jumps across time to fight sharknadoes, while pursuing his lost son Gil through wormholes. I find it precious how Ziering tries to pull out an “acting” performance amongst this stable of rank amateurs, gimps, douches and bushpigs.

Somehow, through unbelievably lazy screenwriting, all Fin’s asinine ‘nado buddies are in the Mesozoic too, while feckless CGI dinosauria stumble around them – Nova (Cassandra Scerbo, so vapid I forgot to look at her tits), Bryan (Judah Friedlander, who can’t out-act the dogshit in his beard) and Fin’s lost wife April (Tara Reid, still undeniably untalented). Bryan explains that the first sharknado caused the others “like a game of dominoes.” Which totally explains nothing.

Tara Reid surprises us by sinking her credibility LOWER than zero, reprising her vacuous role as wife/mother/cyborg/non-actor April. After her cutie-pie turn in AMERICAN PIE (1999), she could have become another America’s Sweetheart, but these days her acting is like a caveman’s idea of what “acting” is. Truly a sight to behold, she is such an expressionless, talentless moron, it’s amazing she knows to keep her hand off the stove.

So Fin’s gang of stupes succeed in stopping that first prehistoric sharknado… Then they continue to jump forward through time to stop other sharknadoes. But didn’t Bryan just say that stopping the first one will stop ALL of them? If you’re looking for logic, you came to the exact opposite place.

Directing – pathetic. Editing – atrocious. Effects – horseshit. It is NOTICEABLY lousy. In each scene, if there is more than one cutaway, we lose all sense of where objects are situated in that scene: they are shooting fireballs into a sharknado way over there, then Fin dives off the Pteranodon he is riding with his gang, and lands – on a shark – one of those sharks that is way over there in that sharknado they are shooting fireballs into. The gang shouts DOWN to him on the shark, then two minutes later, Fin is jumping off the shark DOWNWARDS to land on the Pteranodon again. I mean – what the–? Rookies with cellphones would do a better job than director Anthony C. Ferrante. 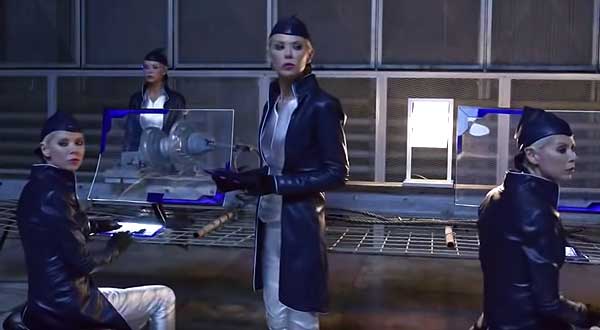 Can Tara Reid’s clones be even more expressionless than the real Tara Reid?
Answer: No.

I’m not one of those people fooled into the groupthink that “it’s so bad it’s good.” SHARKNADO 6 – like all its entries – is a joyless, cynical exercise in how far into unwatchable un-quality something can be driven before the mongoons stop buying it.

Desperate to attach itself to anything of quality, there are numerous references to BACK TO THE FUTURE. Doesn’t help. Just annoys.

Scotty Mullen screenplays as an 8-year-old child would write an adventure story, making rules up as he goes along about time travel, history, characters, eventually resolving in a sharknado-free world where so many of the writer’s own rules were broken to get to that point, he might as well have dispensed with all the painful explanatory dialogue and squeezed in 20 more downward-spiraling-career cameos.

Dee Snider is a sheriff, his frosty locks on full stun. He tells Fin, “I think I know who’s twisted, mister!” and “I’m not gonna take this anymore!” I am in such pain. Darrell Hammond does his Clinton impersonation as George Washington. The great James Hong makes an asshat of himself. Vivica A. Fox appears as a fat version of herself– no wait, uh, that’s just herself. And Neil deGrasse Tyson is Merlin – !?!… no… NO!…. NOOOOOOOOOOOO!!!!

To balance the insidious demolition of talented personalities, there are also those people who are a waste of space on planet Earth – Kato Kaelin, La Toya Jackson, Marina Sirtis, Ben Stein, Tori Spelling, all mixed in a big jumbled scrotum of cameos.

So come one, come all, you morons who made the 2013 film debacle SHARKNADO a success; come, all you lowbrow, oleaginous imbeciles who derogate learning and elevate ignorance to the point that America is led by a congenital idiot; come, all you preachers of dogshit and low information voters and low-bar dung-eaters who don’t know or care about quality in this life or in your work, who tear down people of learning and give Flat-Earthers and Moon-Fakers and Astrologers and Psychics equal time. This LAST SHARKNADO is for all of YOU.

Oh, and fuck the human race.

4:42 – Tara: “I was at one of the Emmy parties [translation: I was at a crack house] and I ran into the directors and the writers of AMERICAN PIE [translation: I recognized one of the assistant directors on AMERICAN PIE and started to bother him for a role in any upcoming dreck he might be working on] and I was like, ‘Come on, guys, when do we make the next AMERICAN PIE?’ [translation: I offered him a blowie to put me in his next piece of shit project] and they both looked at me and were like, ‘Soon, Tara, it’s going to happen’ [translation: he humored me and placated me with bullshit while he was trying to back away. I only realized he was fake-smiling when I looked up from his cock in my mouth.].”