He conquered Thulsa Doom, hunted down a Predator and terminated Terminators. Now, Arnold Schwarzenegger faces his greatest foe – a Spanish guy in a sports car. 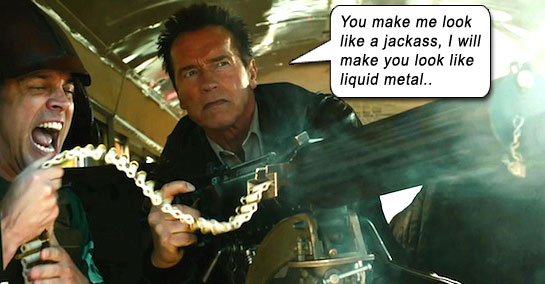 In THE LAST STAND, Arnold is affable Sheriff Bloaty who runs the bucolic town Last Stop Before Freedom with a neighborly pat on the behind. It’s 8 miles out of Vegas but as far from that glittery burg as Spain is. Fugitive drug lord and race car driver Gabriel Cortez (Eduardo Noriega) is making a bust for Vegas through Bloaty’s town and apparently all of Forest Whitaker’s elite FBI reservoir dogs are ineffectual against Gabriel’s spiffy sports car and continental accent – but that’s okay, because Sheriff Bloaty’s own ragtag team is the nation’s last defense: the Weaselly Deputy (Zack Gilford), the Hottest Chick in Asgard (Jaimie Alexander aka Sif), the Brazilian-American war hero (Rodrigo Santoro, who somehow oozes European), the Quirky Mexican (Luis Guzman) and that jackass from JACKASS (Johnny Knoxville), who happens to own the biggest illegal arsenal this side of the Death Star, which Sheriff Bloaty turns a blind eye to for plot convenience in the third act.

The best thing about THE LAST STAND is that Arnold is not superhuman, not a flamboyant action hero, not a killing machine; he’s just a normal cucumber, like you and me. In this first starring role since leaving office as Governor of California, Arnold must do things the hard way, running and shooting and punching like a human. At one point, as he rises from diving onto the floor for cover, someone asks him, “How are you, Sheriff?” He replies, “Old.”

Two different movies mashed together, with Forest Whitaker taking things way too seriously in his FBI segments, which feature brutal murders, whiplash driving and banks of Dell computers manned by ineffectual drogues like a BOURNE movie, tempered by Arnold’s low-tech scenes and winks to the fans. No doubt he’s playing it straight, but there’s always an undercurrent of cheeky self-awareness around Arnold.

Peter Stormare brings his usual level of delicious villainy as Gabriel’s man on the scene, clearing the way for Gabriel’s hell drive. 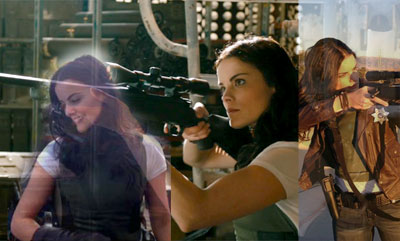 The way this chick is put together: Poffy like!

That sexy man-jaw of Jaimie in her perky little vest; that diner chick with her shorty skirt and cowboy boots; Genesis Rodriguez as the hostage, with lips made by evolution for one purpose only… If you think the chicks are here for anything other than window dressing, you don’t know action movies. Or you’re a chick. To prove she’s no more than potential tail in the plot, Jaimie engages in irritating exposition dialogue with Euroguy as he languishes in jail under her D-cup star…”You had everything. You were smart, you were popular, you were a great athlete, you had a full ride through college. [Okay, okay, snowjob over, what’s your point?] Had you not gotten yourself kicked off the track team…” [Did she just use the phrase, “Had you not”? A line of exposition dialogue that sounds like a line of exposition dialogue!] Euro picks up the expo ball and runs hell bent with it, “Really, you wanna do this? Okay, I’ve served my country in fuckin’ Iraq and Afghanistan–” [Oh no he din’t! Where the fuck did that come from anyway, poser? She was only up to the track team. But its subliminal intent is “automatic war hero.” Pffh! Not in Poffy world. Chump!] She rightfully interrupts, “We’re not talking about the war; we’re talking about you being locked up for drunk and disorderly! [So he’s a ‘war hero searching for his identity.’ Nah, typical belligerent loser drunk who happened to get a license to kill in the military; upon returning home, finds himself out of step with society because he was ALWAYS out of step with society.] It’s embarrassing to have to lock up your ex-boyfriend–” [Ohhh no. So they had a history – sez the Exposition] He interjects, “Whadayou care, if we’re not together?” [telegraphing that by the time this shootout is over, Sif will be swinging on his Mjolnir again].

Deputy Weasel dies in Sif’s arms and all he could think to say to her, as she’s crushing her wet bosom against him, is “Take care of Euro in the jail cell”? Like he never harbored fantasies of banging her like a thunder god until they were both crying. What kind of a doof are you, Weasel?

The violence and swearing are at a premium; a low enough budgeted movie where the producers didn’t have to worry about tentpole numbers to recoup billions, so they could afford an R-rating. Gunfights are not just overly bloody, but realistic in how people’s bodies react to the wounds: thrown violently aside, brains splattered everywhere, blood and shards of bone spraying everywhere. Very nice.

When Sheriff Bloaty hears that SWAT isn’t coming (because Gabriel took them out with his supercar), he vows he won’t stand aside. But let me interject: if he didn’t have Knoxville’s illegal armory to fall back on, would he have committed suicide standing in the street alone trying to stop these professional killers? No. It’s not the strength of your resolve – it’s the firepower to back it up. (I’m not advocating for guns like a Republican water-carrier, I’m saying he’s painted as a hero for the act of standing up, but he would have been forced to back down if he didn’t have the armory.) But why isn’t this tiny American town militarized with tanks and mine-repellant vehicles anyway, like all America’s small towns of late, police force populated with arrogant untrained wingnuts fantasizing they’re super-soldiers, dressed in camo instead of dark blue and armored like the fantasy-iron-men they think they are?

THE LAST STAND will actually be between the people of America and the bloated moronic police force that thinks it runs the place.