…and Justice for none.

Just as every cop is a criminal / And all the sinners saints.
As heads is tails, just call me Lucifer / ‘Cause I’m in need of some restraint…
— “Sympathy For The Devil,” The Rolling Stones.

Handcuffed in the back of a police cruiser, I see a poster for LAW ABIDING CITIZEN and overhear the officer in the driver seat comment to his partner, “Seen that movie? Awesome.” 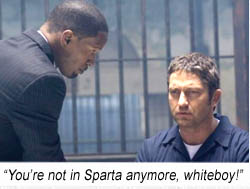 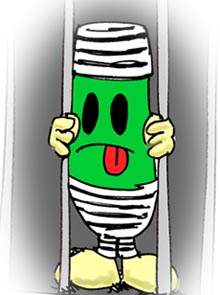 Of course he’d think it was awesome. We all know that cops are bottom-rungers, trained watchdogs, the lowest cog apprehenders of the lowest cogs. They only know enough about “The Law” to apprehend without discernment. And they know nothing about “Justice.” Now I could’ve tried to dissuade this bacon burger of his ignorant opinion, but a) I was busy exercising my right to remain silent, and b) he would not possess the mental capacity to comprehend me; which might have led to c) a nightstick to the throat.

LAW ABIDING CITIZEN is about a vigilante, Clyde Shelton (Gerard Butler), who takes revenge on the men who murdered his wife and child. Clyde is apprehended by the police (see? “apprehend without discernment”) and from his jail cell he terrorizes lazy, despicable attorney Nick Rice (Jamie Foxx) to teach him a lesson. Nick let the murderers walk on a plea bargain, instead of taking it to trial and risking losing a case.

CITIZEN starts as a very satisfactory, righteous vigilante story and an indictment against the criminal “justice” system, and turns into a one-dimensional vendetta that involves Clyde blowing stuff up, Hollywood style.

The movie’s first half is a rollout of counterintuitive surprises: Clyde carving up his wife’s murderer and then letting himself be taken in – naked, mind you, ladies! (that’s some Sparta-licious booty!); Clyde citing an obscure case number at his hearing and the judge allowing him to walk – then chiding the judge for almost letting a suspected murderer go free and being taken into custody for contempt!; Clyde blackmailing Nick into getting him a Duxiana mattress and a steak dinner in jail…

When Clyde kills his cellmate unemotionally and lies back waiting for the warden peacefully, we realize something is askew – it’s a cool scene, but Clyde is starting to look like Hannibal Lecter, rather than a man bent on righteous revenge for his wife. It astounds me how writer Kurt Wimmer and director F. Gary Gray lost the movie’s message so inelegantly.

At their wits’ end on how Clyde is besting them from his solitary jail cell, Nick wants to break into one of Clyde’s properties to try to discover his secret. A detective asks, “What about his civil rights?” Nick replies, “Fuck his civil rights!” So lemme get this straight: after being lazy enough to let a murderer walk, thereby abrogating his oath on seeking justice and indirectly violating Clyde’s civil rights to a fair trial against his family’s murderers, now Nick decides to proactively violate Clyde’s civil rights even further – and vengefully proclaims it! Nice job, Nick, you “law-abiding citizen,” you.

Is it any wonder cops revel in this movie that offhandedly regards everyday citizens as third-class peons with no rights?

To stop Clyde blowing stuff up and teaching him lessons, Nick decides to go vigilante and blow up Clyde, Hollywood style. Which means he learned nothing from Clyde. Wasn’t Nick the one who whined to Clyde that he shouldn’t be taking the law into his own hands and being all vigilante? All forgotten in the final STUPID STUPID STUPID STUPID act. Further, Nick had no proof that Clyde was perpetrating all the vengeful acts from his jail cell – you might “know” a person has committed crimes but before you blow them up, shouldn’t you take them to trial first, or at least read them their rights?

But that cop said this movie was “awesome.” Getting an idea of the shallow mindset of uniformed flatfoots?

It gets tiresome when we can figure the “winner” of the movie by figuring the biggest paycheck. Butler may have carved his name into the A-List with 300, but Foxx (RAY, DREAMGIRLS, THE SOLOIST) is the money here.

Clyde states unequivocally, “Everyone must be held accountable for their actions,” yet Nick is never brought to justice himself when he goes vigilante without evidence. I’ve said it before: Vigilantism is as malformed and unjust as The Law that it thumbs its nose at. Two sides of the same confused coin. This movie chooses to ignore any further consequences of vigilantism or the law or justice after the moneyboy gets his way.

In the DVD Commentary, the filmmakers say Nick Rice is interested in Justice as a concept – but they’ve got it wrong. He’s interested in The Law as a Job. And even then, he is a first-rate slouch at his job. Clyde laments he is a law abiding citizen, thus the law should deliver him justice. So we take it for granted the title pertains to him. But the unrealized irony in this movie is that detective Nick Rice is the LAW ABIDING CITIZEN – the one who suckles at the black teat of The Law for his advancement – and Clyde Shelton is the Justice-Seeking Citizen.

So officer, explain the Justice of why I’m shackled in the back of this police cruiser? Shit, look who I’m asking…