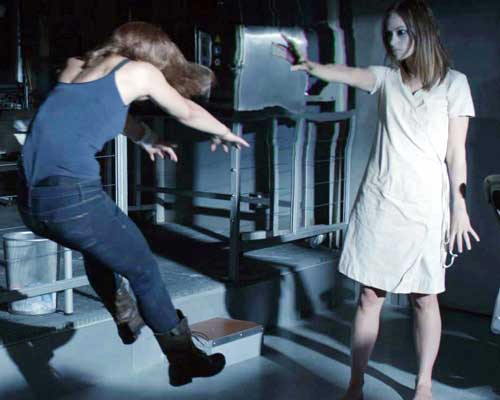 If you get smart enough to read minds, you too can do this!

Talk about wasted opportunity! In the grand tradition of PET SEMATARY and FLATLINERS, documentarian David Gelb (on his first feature) directs a movie that thrums with solid ideas and philosophies, psychological terror and eeriness, up to the point when the objective of the movie is achieved – bringing someone back from the dead. Then, instead of all the tingling pathways the story could have pursued, the movie drops dead itself, devolving to a slasher film.

They fail with a pig. They succeed with a dog. (Ah, tampering in DOG’S domain!)

Through a mishap, Fiancé dies during an experiment. Screenplayed sensibly up to that point, giving each character enough motivation to attempt an unauthorized “bringing back” of a human (ticking clocks, corporate takeovers, unrequited love triangles), movie then degenerates to zombie killer. We could see it coming a mile away when writers Luke Dawson and Jeremy Slater (FANTASTIC FOUR 2015) foreshadowed which side of the afterlife issue they’re on – the wrong side.

Head scientist explains to Redhead about a chemical called DMT – which their reincarnation serum is based on – the most potent psychedelic on the planet, found in the human pineal gland. “Nobody knows why, but when you die, your brain floods your system with a massive blast of DMT. When you think you’re seeing the light at the end of the tunnel, it’s just a big trip that you’re having.” (The fact this is a specious simplification is not relevant. In the world of this movie, the scientist has postulated a perfectly good physical explanation for the hallucinogenic euphoria you experience just before death.) Then Fiancé – a scientist herself, who is privy to the same evidence Scientist is – counters his pragmatic explanation with the idiocy that DMT is “to allow the soul to open doorways to other dimensions…” Where are you getting your evidence, Lady Scientist? Oh, no evidence – just a couple of gutless screenwriters appealing to the dumbass demographic that this movie will attract once word gets out it’s just a slasher film and not a true speculation on post-life animation.

LAZARUS EFFECT might have gone the way of a low rent EX MACHINA, but with that one lame speculation, we realize the movie’s task now is to illustrate “souls trying to open doorways” after they die. Y’know even that might have been tolerable, but why did they simply turn the reincarnated person into the Thing To Run From? If she’s so intellectually advanced after coming back from the dead (i.e. she can read minds, she can utilize 90% of her brain at once, she’s telekinetic), why doesn’t she do all the calculations for the DMT serum and figure the best way to make it work effectively? Or help the United Nations stop child abductions in Africa? Or close down all the undeserving-of-life computer hackers creating malware for the hell of it? I dunno – can you not find something more interesting than chasing people and killing them?

The actors do the best with what they’ve got and keep their conviction to their bitter ends, even though the smart dialogue and profundity is all tossed out the window after reincarnation is achieved. Filmmakers just didn’t care any more. One wonders why they went to so much trouble with the profound ideas and subplots (unrequited love, the university closing down their experiment, burning building backstory) if they were just aiming for Thing To Run From.

We know movie has degenerated to utter idiocy when Evolution is misunderstood and misrepresented yet again in a Hollywood movie (oh, like that’s a surprise!). “There’s a reason evolution happens slowly. Right now, her brain is doing things it was never meant to do, and it’s not taking millions of years, it’s taking minutes.” Yes, but that’s not “evolution” – that’s just ultra-fast development. Evolution cannot be applied to a solitary organism; evolution is a term applied to GROUPS OF ORGANISMS OVER TIME. Who cares, right? Just find a good hiding place.

Redhead is zombie chick’s final adversary – oh, woman empowerment time! And the hick who is adept at nothing defeats the scientist using 90% of her brain. In other words, hot redhead defeats chick whose brain is on fire.

Anyway, why bring people back from the dead? Like there’s not enough people on Earth already.