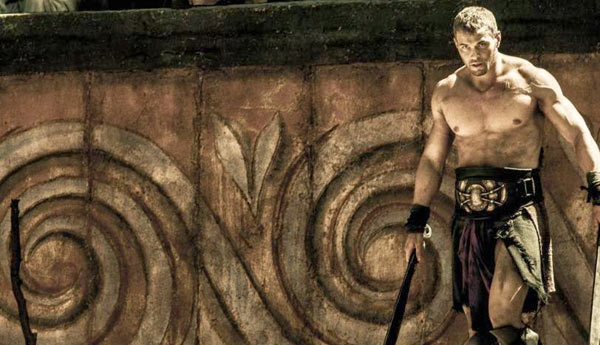 “And now, ladies, please welcome to the stage – Hercules! Give him a hand! Let’s see those dollars!”

The movie 300 had rough dungeon sex with GLADIATOR and they had a dim-witted child called THE LEGEND OF HERCULES.

Kellan Lutz (TWILIGHT saga) co-stars with his expressionless face as Hercules, the son of Zeus and a mortal woman, who would become a slave. The slave who became a gladiator. The gladiator who defied an empire—wait, uh… I got my loincloths confused; this guy is born a prince. The prince who became a Chippendale’s dancer. The Chippendale’s dancer who became an expressionless actor. (Kellan Lutz’s face auditioned for the Keanu Reeves role in his next movie, but was narrowly beaten out by a block of wood. Or maybe that was Keanu Reeves.)

The plot follows no particular legends that have ever been written by ancient Greeks. After King Shoutides (Scott Adkins) conquers one empire too many, his wife Queenides (Roxanne McKee) gets sick of him (first time a woman has ever gotten sick of a man for having too much! Like I said, this is not the motivation from the actual mythological Hercules; this is made up fluff by wimp writers). She petitions the goddess Hera to save her people and instead of doing something logical, like killing King Shoutides with a lightning bolt, Hera tells Zeus to impregnate Queenides with a baby who would grow to be a savior. Now I ask you, Christians: See how this strategy looks when applied to another myth? Sounds kinda stupid, don’t it? Unlike the authorized version of the Hercules myth – where Hera is outraged at Zeus raping a mortal, and hateful of the child Hercules – in this PG-13 dull-fest, Hera veritably pushes Zeus’s invisible cock into Queeny’s vagina, whereupon Shoutides catches her moaning in her sheets like she’s just purchased a Rabbit ™ but he can find no rapist, so gets mad at Rade Sherbedgia, who I couldn’t quite tell was either a peeping tom or Queeny’s sage. Either way, Rade was so miscast, his glued-on beard had regular bitch sessions about his role with Kellan Lutz’s expressionless face.

Hercules grows to adulthood under an assumed name, Regular Guyus, so people think he’s just a regular guy, and not a demigod. But it matters not, as this movie does not endow him with super strength, or even much intelligence (which, coincidentally, is an actual aspect of the myth), from the stunted way he delivers his lines in that faux British accent. Because remember, the more British you are, the more Greek you become. Herc’s treacherous brother, Insipides (Liam Garrigan), is even more British, and thusly more fey.

Plot follows Herc’s guarded romance with princess Tittycus (Gaia Weiss), from across the pond. She’s betrothed to Insipides, of course, but loves (read as fucks his brains out) Regular Guyus. So King Shoutides sends Regular Guyus on a battle with his sexy general Tomus Cruisus (Liam McIntyre, no stranger to sword-and-sandal adventure, as SPARTACUS). Both are captured by a foreign army – who are still, somehow, British – and made gladiators.

There are no 12 Labors, except a brush with the Nemean Lion pixels, that Guyus kills, and then lets Insipides take the credit for, when they return to Greek Britain. It’s another of many idiotic plot points that dilutes the mythology. 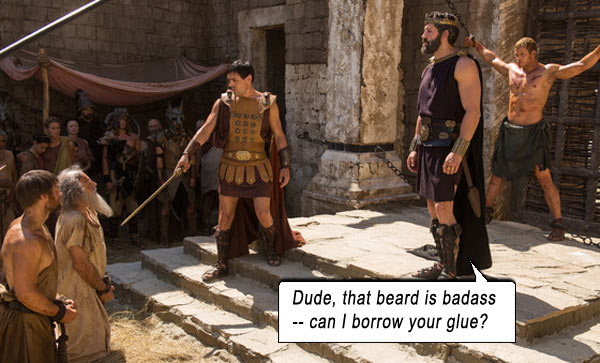 When will studios stop giving Renny Harlin money to direct movies? A veteran of such classics as DIE HARD 2 (the worst of the series), CLIFFHANGER (a dark horse in the Sly canon), CUTTHROAT ISLAND (killing the career of Geena Davis), and EXORCIST: THE BEGINNING (hell on Earth, but not in that good way), Harlin continues to work seemingly because a fool and his money are, in fact, easily parted.

LEGEND ends with that infamous scene of Hercules (now out of the closet), chained to two pillars, which he subsequently brings down and swings them on chains to crush the pixel soldiers attacking him. But wait – there’s more… oh god, really? There are more battle scenes that involve ridiculous attacks with no strategy, using lightning bolt whips and dancing topless for dollars.

THE LEGEND OF HERCULES was released in January 2014. Brett Ratner would release his version of HERCULES in July 2014, starring The Rock. The same concept – of Herc being a Regular guy – is adopted in that telling, although Ratner has a slightly better grasp of soldier pixels and framing. And The Rock’s acting is much better than Lutz’s, reaching to the level of slightly mediocre.