Humans against angels at a truck stop diner. Fate of the world in the hands of rednecks. As usual. 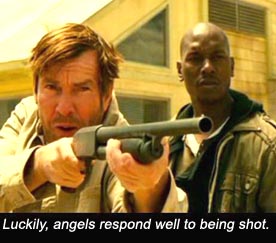 LEGION follows Angel Michael (Paul Bettany) helping the rednecks fend off the heavenly host sent to wipe out the human race. God’s pissed again. Can you blame him? Y’know, I don’t see eye to eye with Him on anything (on accounta He doesn’t exist) but I kinda agree with the Big Girl’s Blouse on this one: Humans have to die.

The clincher is: YOU agree with Him. Your Christian God is infallible, right? So when He decrees you’ve had your chance, that you blew it, and are slated for extinction via his armies of wing-ed destructors, well… haven’t you spent the last two millennia saying He Moves In Mysterious Ways (angels “possess” the bodies of humans to kill them… uh, somehow) and Yours Is Not To Reason Why (Why send an Ice Cream Man and old lady?)? And now you deign to question His smiting and try to stay alive against His wishes?

But Angel Michael sees it differently (once again, misinterpreting the easiest of primo Commandments: Thou Shalt Have No Other Gods Before Me) and thinks God wants him to Do What’s Right instead of what’s, uh, “right” from God’s POV (which – if he is infallible – is whatever he decrees; “If the president does it, it’s NOT illegal!”), so rebels against God and tries to save the puny humans. Last time an angel rebelled against God, Hell was created…

Paul Bettany puts in a strong Bruce Willis performance and director Scott Charles Stewart affords him all the hero angles and a champion pair of wings. Leader of the rednecks and owner of the diner is Dennis Quaid, phoning in his Concerned Face #3, Charles S. Dutton doesn’t even bother picking up the phone, Tyrese Gibson sets-and-forgets his LA Gangsta, Lucas Black just forgets – how to act; Kate Walsh tries looking like Wendie Malick and Willa Holland tries harder to look like Mila Kunis.

Most important to the asinine plot, there’s the pregnant woman (Adrianne Palicki) who’s about to have the baby that will “lead the world out of darkness,” so must be protected at all costs! Hmm, where have we heard that before? CHILDREN OF MEN, THE SEVENTH SIGN, REVENGE OF THE SITH, The Bible…

When the baby is born, Michael says “History has been unwritten” – that’s because no one in this town is smart enough to write.

Illogical, irrational, pointless, contradictory, perversely ignorant, LEGION is a quasi-zombie bulletfest that would like to be a philosophic action movie. Aimed at bible freaks who think mankind has preferential standing with a deity who is powerful enough to create the universe yet unable to wipe out seven humans at a truck stop. 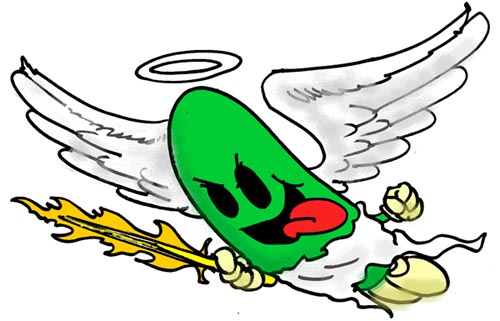 By the way, the diner is called Paradise Falls. Ha ha – get it? “Falls” as in verb.

Angel Michael tells the rednecks, “the weak-minded are the first to go,” that is, become possessed by angels and act like zombies; which implies that even the “strong-minded” will eventually get possessed. (And I snigger at the other implication: that these diner rednecks are the “strong-minded.”) Later we hear a radio report that the military have set up a barricade against the zombies– hang on! Shouldn’t the military, being the weakest-minded of all humans, be the absolute first on the angelic list of abductees?

So what’s the ultimate plan anyway, Azazel? When the humans get possessed by angels, they walk around with blank stares and, uh, then what? Kill themselves? Fly into space and suffocate? Big Man wants to wipe out humanity – why not another Deluge? Or flare the sun into supernova. Rip the atmosphere off the globe. Pull the Earth out of orbit. Or just selectively kill all humans by making them drop dead, or just disappear. Guess it’s too much to ask His Big Supernaturalness for something SUPER-NATURAL…

The Elongated Ice Cream Man (the great Doug Jones – Fauno in PAN’S LABYRINTH, Abe Sapien in HELLBOY) and the Wall-Crawling Old Lady pay their visits to try to murder the diners. Don’t hate them: they’re ANGELS doing God’s bidding; something you should all be doing as well, hypocrites!

Luckily, these supernatural zombie angels are not immune to bullets from good old American automatic weapons. (Big fist-up for the NRA!)

Angel Gabriel (fierce-faced Kevin Durand) appears to do battle with Angel Michael and – being a supernatural entity an’ all – he brings a mace. (How Spanish Inquisition of him – well, the Inquisition was perpetrated in God’s Holy Name…) And being supernatural (you know, beyond Nature, from Heaven’s unimaginable realm), one wonders why these two angels are speaking English to each other. The Gospels are silent on that one too.

The DVD synopsis tells us: “Their mission: protect a waitress and her sacred unborn child from the relentless, bloody siege of the demonic legion.” But the Legion is not demonic – it’s ANGELIC! And who said the baby was sacred? Even Michael says it is outside the realms of holy and evil. So even though this guff is marketed for lowbrow rednecks, the marketing is too gutless to admit that these are ANGELS blindly following God’s orders like spineless sheep (you know, like the American military), and that the newborn child is a pagan (you know, like Thomas Jefferson or Jesus).

In the grandest of ironies, Paul Bettany’s role just prior to this glittering dung was in CREATION, where he played naturalist Charles Darwin, whose theories of natural selection forever changed the way humans regarded themselves in the scheme of the universe, and who is congratulated by Thomas Huxley – for “killing God.”