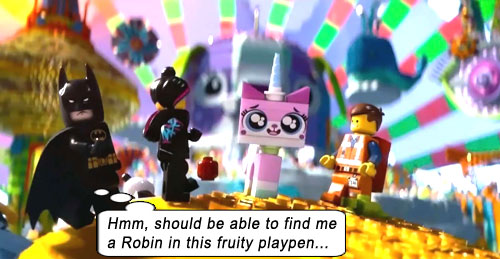 Will knock your block off!

THE LEGO MOVIE is a maximus overload of cinematic revelry; a riotous brick house of bedazzlement. Action, spectacle, romance, cultural refs, fueled by goodness and badness and cuteness. And millions and millions of Lego bricks.

Emmett Brickowski (voice of Chris Pratt) is a little Lego man, with perfect Lego hair, living in a perfect Lego town called Bricksburg. And everything is awesome. Until evil Lord Business tries to “release the Kragle!” and glue everything in place. And Emmett, who is nobody special – always following the crowd and the Instruction Booklet – finds he is, in fact, “The Special” who can stop Lord Business with “The Piece of Resistance.”

Plot is almost secondary to the wondrous animation, yet it’s not exactly style over substance, because the characters and their interactions are fleshed out well beyond their plastic, and nothing short of the Lego world is at stake. Folded into this “drama” is the Lego world’s interaction with the outside world (our human world) and a touching subplot of a father’s belief, trust and love of his son. Ultimately, the real-world father-son redemption will save the Lego world. The most amazing part is how this jam-packed save-the-world love-story fish-out-of-water comedy-action-adventure clacks together so neatly! 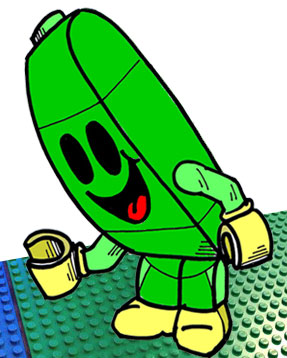 In the Lego world, Will Ferrell voices President Business aka Lord Business (his character a biting commentary on what politicians really are – two-faced, but with both faces ultimately serving their own interests). Lord Business unleashes Bad Cop (Liam Neeson – who has a swivel head that turns into Good Cop intermittently, to no avail) to pursue Emmett and retrieve the “piece of resistance” which is accidentally stuck on his back. Emmett is helped by sexy soldier of fortune Wyldstyle (Elizabeth Banks), who is one of many “master builders” who can McGuyver their way out of fatal situations.Morgan Freeman lends his velvet voice to the blind wizard Vitruvius, who prophesied the coming of The Special. (Before he takes down a troop of baddies, Vitruvius intones, “Did you call me ‘old’? I like to think of it as ‘experienced’!”). And Will Arnett is the gravel-throated avenger of the night, Batman! (“I’m Batman!”) He’s Wyldstyle’s boyfriend. It’s really serious.

Charlie Day is Spaceman Benny, Alison Brie is Unikitty, and Nick Offerman is pirate Metal Beard. Many other superheroes like Superman, Wonder Woman and Green Lantern appear, but no one seems to have any of their characters’ powers. They are just the Lego characters themselves.

You’ve probably seen many CGI Lego features, which utilize Lego figures like cartoons, where they seem pliable like Gumby. The plots and action are also geared toward a younger audience, so not too frenetic or intellectual. THE LEGO MOVIE is a total departure from that, uh, model. Structured to look like old-school stop-motion, each figure is bendable only at their real Lego joints (making for hilarious sight gags, as when Emmett does his morning exercises, bending his body backwards completely from his hip joints). The speed and complexity of the gags is also ramped up; it will take at least three viewings to absorb and appreciate this fulsome brickiness.

As a kid, I didn’t approve when Lego made a piece that was too specialized. Marketing Lego in smaller and smaller packages meant that certain pieces had to be uniquely fabricated. So in a kid’s package of 20 or less bricks, you’d see whole Lego people and whole chassis of Lego cars and whole fuselages of Lego planes, etc. I could accept the Lego figurines – they achieved the purpose of personalizing the clinical bricks and “connecting” with their target audience (me and ten million other kids) – but any other pre-built stuff, which should be achieved by construction rather than fabrication, I considered “cheating.”

Well, there is no cheating in THE LEGO MOVIE. Everything is built with resourcefulness, creativity and humor. From the credits to the town, to the psychedelic Cloud Cuckoo Land inhabited by Unikitty. Not only that, any scenery with “movement” – such as the roiling sea, crumbling buildings or flowering explosions – is constructed from millions of Lego bricks in countless stop-motion stages. It’s a wonder to behold!

The town of Bricksburg – for all its singing in unison “Everything is awesoooome / Everything is cool when you’re part of a team!” – seems to be an Orwellian dystopia, with everyone following the Instruction Booklet and slotting into a clockwork society. Emmett is portrayed as being one of millions of automatons who drive the same drive to work every day, sing the same song, drink the same drink, and lust the same lust for life. But when he tries to find someone to hang with after work, they all give him fake excuses. A commentary on automatons versus individuals, like METROPOLIS? No, just a device to show Emmett truly is “nothing special” amongst the morass of people who behave like sheep, yet display idiosyncrasies that sets each of them apart. Later, when Wyldstyle exhorts the town to become creative Master Builders to defeat Lord Business, they all easily comply. The trick was for Emmett – someone who truly thought like an automaton, and whom others thought of as one – to discover the specialness within himself, to defeat Lord Business and win the girl. This he does, in the form of a double-decker couch. Oh well…

Everything is still awesome.