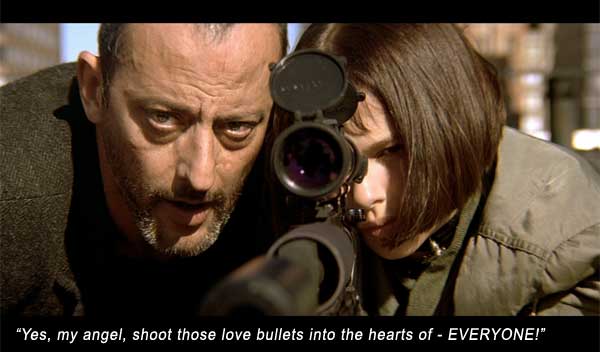 Angel and the Bad Man.

If cuteness has a forbidden name – then, oh Christ! It must be Natalie Portman! If loving this 12-year-old is wrong, I don’t wanna be right. Or in jail.

LÉON (aka THE PROFESSIONAL) is writer-director Luc Besson‘s masterpiece. For its poignant paintings of shadowy souls in conflict with themselves and each other; for its dynamite look, excellent staging and uniquely ominous soundtrack; for its inscrutable French hitman Leon (Jean Reno, to date, his best role in an English-language film) plying his lonely trade in the gritty slums of New York; for its delectable psycho cop Stansfield (Gary Oldman, perfecting his Normal-To-Psycho-In-Two-Seconds Method); for its tumescent buckshot to our temples in the form of skinny, raven-bobbed, adult-mouthed, choker-and-cutoffs, chest-budded Mathilda (Natalie Portman). 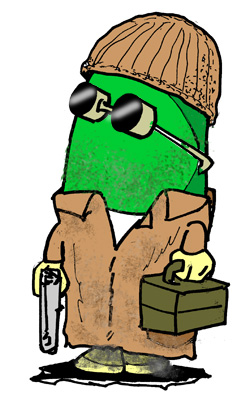 An extension of Reno’s “cleaner” character in Besson’s French hitgirl masterpiece, LA FEMME NIKITA, the opening scenes establish Leon’s brutal bona fides, as he elegantly tears through a mobster’s henchmen to deliver a message from another mobster. With a death adder’s stealth, he strikes; like a wraith, he is gone…Leon’s contractor is Italian restaurant owner Tony (Danny Aiello), whom we meet only in brief snatches sitting across a dining table from Leon. We discern quickly that Tony’s avuncular façade cloaks the fact he is exploiting Leon’s immigrant status and childlike innocence to fleece him blind. Tony reminds us of John Belushi as manager Ron Decline in THE RUTLES, “People ask me, ‘Where’s the money? Where’s the money?’ I don’t know where the money is. But if you want money, I’ll give you money.”

Stansfield and his men execute Mathilda’s drug dealer father for cutting their coke, along with her family as collateral damage. Right next door to Leon. And Leon finds himself sudden guardian angel to Mathilda – not through any compassion on his part (he wrestled with himself on whether to let Mathilda into his apartment or let her die at the hands of the murderous cops). After he had shown such mercilessness in cutting down henchmen, we wonder what stirred him to help the little girl. (Yes, the dirty thoughts will cross your mind – as it should in any functioning human – but we’ll address those in a moment.) We recall Leon’s credo is “No women, no children” and presume that if he let her die, it would be tantamount to him murdering a child. That night, he again makes a choice, as he holds a gun to her sleeping head, and refrains from using it.

Mathilda, mourning only her murdered little brother, wants revenge on the cops; wants to become a “cleaner” herself to do it (the image of this little cutie firing a handgun arbitrarily out a hotel window to show Leon she is not afraid to kill is disturbing in all the wrong sexy ways); or wants to contract Leon to kill the cops, and offers to do things for him in lieu of payment. At this point, our gutter minds once again kick into gear, but she’s sincerely talking of cleaning the apartment and doing his laundry. Still, it ain’t as innocent as it seems…

At 12, Portman sears the screen as seductively as any starlet three times her age; in her first screen role, she displays a maturity in her character born of having to grow up fast, and a maturity in her acting that makes grown men weep in repression. Now don’t get on your high horse and accuse me of being the only cucumber on Earth with lustful intent toward innocent little booboo. The filmmakers knew they had a hot tamale on their hands, so pushed the envelope: In other versions of the script, Leon and Mathilda shared much more sexual tension, in one version, Mathilda seducing Leon into being her lover! Due to prudish American audiences, these scenes were removed, but – I say again – don’t ever believe these are implausible, wayward musings. Every man over 18 watches this film with the same deep-rooted animal urges. Portman’s character is written that way: precocious to begin with, in an environment seething with promiscuity, and forced to find the means to stay alive in an underclass where everyone is a killer; some just wear badges. How would you turn out on streets so mean?

Jean Reno even admitted to playing Leon “a little slow” so audiences would believe he entertained no carnal thoughts toward his underage charge, but isn’t that another way of saying, ‘If Leon was a normal, red-blooded, fully cognizant male, he would jump that jailbait in a hot second’?

It is a testament to Reno’s brilliant minimalist performance that we find so much empathy, sympathy – HEART – in a contract killer. We feel sad for his reclusive existence, ironing his clothes, constantly exercising, the fact he cannot even sleep lying down, but in an armchair, back to the wall; his one true friend, a plant that he cares for zealously. But, by your own definitions, he is a bad man; it’s just that the people he kills are so much worse than him. Unlike him, they exhibit no ethics or principles.

Contrasted with Reno’s minimalism is Gary Oldman’s maximalism; illustrating the fine art of scenery chewing without seeming like he is taking one bite. In early scenes we see him pop an unidentified pill, which twists his neck in paroxysm, whereupon he accosts Mathilda’s dealer father, sniffing his neck, miming playing piano on the mantelpiece, lecturing on the merits of Beethoven versus Mozart. (In this same year, Oldman would play Beethoven in IMMORTAL BELOVED.) For all intents, he is Normal, and we’re just waiting for the To-Psycho-In-Two-Seconds. The revelation that he is a dirty cop comes as a shock – but no surprise. He reveals his level of damage when Mathilda later faces him in a men’s room (okay lads, get your minds out of that gutter…) and he asks her if she values her life. Upon her affirmation, he bends to her slowly, dare I say sensually, and whispers, “That’s good, because I take no pleasure in taking life if it’s from a person who doesn’t care about it.”

I love that maniac!

This scene is too good to miss: what I love most is not the Normal-To-Psycho shout, but the way he defocuses on Benny in his follow-through.

Believe it or not, writer-director Luc Besson forged LÉON as a throwaway while he counted the months waiting for Bruce Willis’s schedule to open up so he could concentrate on his real next writer-director effort, THE FIFTH ELEMENT, a camp whizbanger with a message of salvation for the world itself. Posterity has cast both movies in a much different light: though you might take THE FIFTH ELEMENT to the prom and bang it in the back of your Camaro, you’d never give that sassy lassy the keys to the Jaguar. What LEON lacks in fruity hella-fun, it makes up for in poignant personal flourishes, brutal action and gutshock emotion. You wanna marry this bitch.

LÉON is one of those intense films – like SCARFACE – where we are so invested in the protagonists’ fates that we wish we wish we wish it would end another way; that every time we see that explosive climax coming, we could do something to wish it in another direction. Leon’s “escape” is ingenious (think: SILENCE OF THE LAMBS, where Hannibal masqueraded as a police officer to elude his captors) and his final moments are all the more heart wrenching because he came so close. Stansfield is there, not knowing his victory will soon be proven Pyrrhic; disturbing, as we watch Leon struggle to form his final words, “This… is from… Mathilda…” Like any hero sacrifice, Leon must go out in a blaze of glory…

The rootless hitman is eventually grounded when Mathilda plants Leon’s fern in the school grounds, “I think we’ll be okay here, Leon…” When we think about it, movie could not have ended any other way: I mean, did you want Leon and Mathilda to escape and start a life together? Are you advocating statutory rape? Those parting “I love you’s” were by no means platonic. Viewed through a European prism, their fate is even more heartbreaking because Euro audiences were probably actively wishing for that happily-ever-after that American audiences were only wishing for academically.

Hitman movies tend to redeem their assassin protagonists by making them want to quit the business after One Last Job; as if stopping will absolve them of all past sins and make them intrinsically “good” people. Even the best of the genre do this (GROSSE POINTE BLANK, THE KILLER, THE AMERICAN). Leon’s redemption does come – but not as a decision to give up his profession; it is when he starts to care for someone other than himself.

So the movie is saying, ‘killing people is irrelevant to being a Good or Bad person – it’s a neutral state – but “caring for someone else” will definitely put you in the Good category whether or not you are a contract killer!’ Quaint.

Leon’s redemption would prove his undoing. Movie opens showing Leon’s effortless efficacy at killing, after which we see him in the shower, washing the victims’ blood off himself. Late in the film, after he has rescued the person he cares about, Mathilda – his arc is defining itself – we see him washing his own blood off himself.

Which means Leon was redeemed at the beginning of the story, when he opened the door to Mathilda! The gruesome beauty is that he continued his profession unabated. He even accepted money from Mathilda to whack the crooked cops. His very last act would be to fulfill that contract, simultaneously keeping a promise and enacting vengeance. His ethos is pure when he dies; he never reneges on his profession. It is, philosophically, a good death. What a beautiful, well-crafted tale.

Caring means dying a little. Or we could cite that old saw: a woman will kill you, one way or another. Even if she’s a little girl.

Especially if she’s a little girl.