“Is that John Wayne down there? Damn! There goes our credibility as the heroes of this film!”

Kurosawa could not have done it better.

Promethean director Clint Eastwood‘s LETTERS FROM IWO JIMA, followup to his daring FLAGS OF OUR FATHERS, is culturally, philosophically and artistically one of the great Japanese films. Made In America. 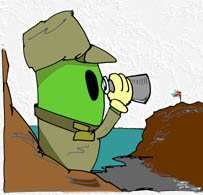 Unlike FLAGS, this Iwo Jima tale has nothing to do with Joe Rosenthal‘s photograph, instead told from the perspective of Japanese troops who bled to keep the White Devil from their children’s shores.

From a book by Tadamichi Kuribayashi (Picture Letters from Commander in Chief), screenplayed by Paul Haggis (Eastwood’s ever-faithful writer from FLAGS OF OUR FATHERS and MILLION DOLLAR BABY) and then handed over to Iris Yamashita to translate and capture Japanese idiom, LETTERS is that incredible artistic creation where we cannot see the artist’s fingerprints.

Entirely in Japanese (with English subtitles), LETTERS finds the heart of its three main characters through the written medium: Saigo (Kazunari Ninomiya) – a young baker, conscripted during his wife’s pregnancy, writes to her of his trench tribulations, while trying to make good on his promise to stay alive and return home to his new daughter; General Kuribayashi (Ken Watanabe) – assigned to pull Iwo Jima from the jaws of defeat, writes to his wife of his American travels before the war, his fears in facing that superior enemy, and laments that he found no time to fix the kitchen floor; Baron Nishi (Tsuyoshi Ihara) – Kuribayashi’s fellow officer and friend, a 1932 Los Angeles Olympian equestrian who once entertained Douglas Fairbanks – rescues a U.S. soldier from the battlefield, chats with him in halting English and reads a letter from the soldier’s mother (“do what is right because you know it is right”), planting an ache in the hearts of his squad indoctrinated, like the Americans, to believe in spiritually-bankrupt enemies. 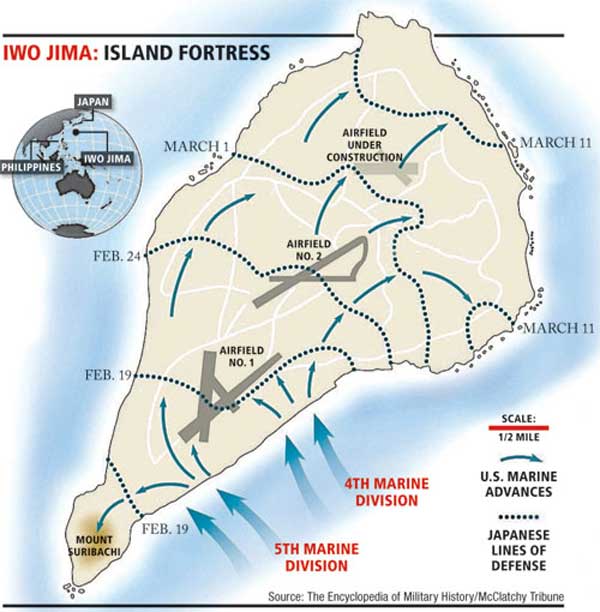 Congruent with real-world Iraq media now focusing on the soldiers instead of the battles, LETTERS focuses on individual warriors, which leaves an impact more intense than any bone-rattling explosion. Like FLAGS, it takes us intimately into humanity where propaganda fears to tread. (Randall Wallace’s WE WERE SOLDIERS, 2002, valiantly tried to convey The Enemy’s humanity, but choked on its red, white and blue and suffered from True Story Syndrome.)

Never has an American war movie been so frank in depicting American troops as invasive, illegal aliens, as faceless an Enemy as the Germans, Russians, Vietnamese and the Japanese themselves have been so cursorily portrayed in countless other war movies. Conversely, the Japanese are not the efficient killing automatons they are always portrayed as; rather, humanized as only Americans were allowed to be humanized for decades (try and get that past John Wayne or Richard Widmark in the 1950s), possessing all the charisma, fears, insecurities, heroism and insubordination of any given American son.

When U.S troops appear, speaking that lowbrow tongue we call English, our Pavlovian response goes awry: conditioned to accept English as the tongue of liberators, at first we feel a sense of security, then are jolted with the ugly realization that these “liberators” are out to kill our Japanese pals.

Battle scenes, leached and stark as the color of unnecessary death and butchery, are like nothing you will ever see outside of a real war: shells launched in fiery clusters from battleships, the searing ricocheting of individual bullets, flames engulfing machine-gunners’ nests, bombs silently dropping and wreaking their destruction; the thump of each artillery round and every shrapnel shard resounding in your chest… 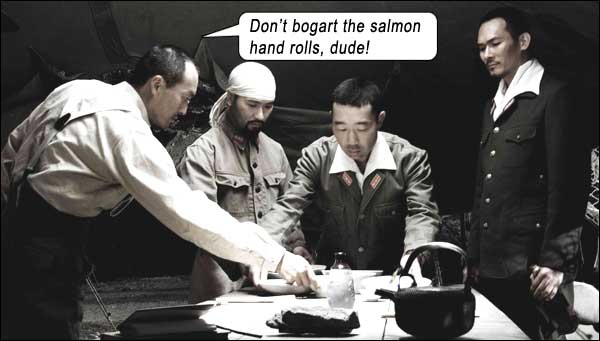 Despite Truffaut’s famous anti-war dictum – that any movie portraying war only glamorizes it – the livid suffering of the Japanese troops trapped in the senseless politics of the Iwo Jima fracas makes each American soldier (in the movie and in real life) look like a heel just for being enlisted. And just as TORA! TORA! TORA! (1970) attempted objectivity in showing us both sides of Pearl Harbor, Clint Eastwood succeeds in illuminating both sides of Iwo Jima in creating two of the greatest anti-war movies ever made, FLAGS and LETTERS ranking alongside Kubrick’s PATHS OF GLORY (1957), Milestone’s ALL QUIET ON THE WESTERN FRONT (1930), or Weir’s GALLIPOLI (1981) – a towering diptych that should stand, like Jackson’s THE LORD OF THE RINGS (2001-2003), as one grand movie split into manageable segments.

Creating anti-war media these days is as faddish as vagina-hugging jeans and butt tattoos, so it comes as sweet irony that (as Kenneth Turan, Los Angeles Times, notes) “Individually and as a unit, these films are a cry against the awful, horrifying futility of war, a cry made all the more poignant because it is made by a man who has been an avatar of on-screen mayhem.”

Explicit in FLAGS is, “Heroes are something WE create,” while LETTERS gives us implicitly, “Enemies are something we create.” Kuribayashi laments, “If our children can live safely for one more day, it will be worth another day on this island.” The same sentiments, the same freedoms, the same blood and bones. 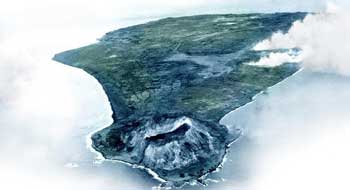 In a culture where suicide is NOT looked upon as a coward’s way out, but rather the only honorable alternative to defeat, Saigo – the younger generation – sees its folly: “There is no use for a dead soldier.” And Kuribayashi, having assimilated Western ways, also realizes that seppuku would serve no honorable purpose if his men were going to fight to the death anyway. Their own intel discovered too late that Iwo Jima was isolated from Japan’s decimated sea and air support, and when the message comes from high command to die honorably – meaning ritual suicide – not all are prepared to go quietly. While one commander tries to take back Suribachi from Joe Rosenthal’s Photograph, other squads – against Kuribayashi’s orders – begin the disturbing act of hand-grenading themselves, some feeling the Glory, some weeping, some seeking surrender and some – like Saigo – rebelling and fighting on.

Not that surrender helps during the disorder of combat, as Eastwood does not sidestep the cruelty exhibited by U.S. good ole boys, who remorselessly execute two unarmed, surrendered Japanese prisoners at point blank range.

The low-ranked Saigo finds himself inadvertently crossing paths with General Kuribayashi throughout the story, the General first saving Saigo from having to dig unnecessary trenches in Jima’s sulfur sand, his eccentric new strategy calling for excavating subterranean networks to ambush the American beach landing forces. Kuribayashi then saves Saigo’s life from a traditionalist commander trying to execute Saigo for not executing himself. (Is there ever a rational reason to kill someone as retribution for not killing themselves for your cause? It’s not just the Japanese samurai who do it – the French execute their own in PATHS OF GLORY as scapegoats, and Americans do it all the time to deserters, men who refuse conscription and anyone who dares exhibit sense in not fighting the petulant battles of politicians suffering from erectile dysfunction and taking it out in congressional murder.) Kuribayashi commends Saigo at one of their chance meetings: “You are quite a soldier.” Saigo replies, “No, just a simple baker.”

At film’s end, Saigo digs to preserve history, burying the titular letters from Kuribayashi – then burying Kuribayashi himself (who ultimately suicides so he can be buried on Jima while it is still Japanese soil).

The final shots recall the film’s original working title (RED SUN, BLACK SAND): from an American stretcher, Saigo watches the red sun set over what was once Japan; then a final shot of Suribachi, Old Glory unseen from the dusky, low vantage point of the black sand of Iwo Jima.