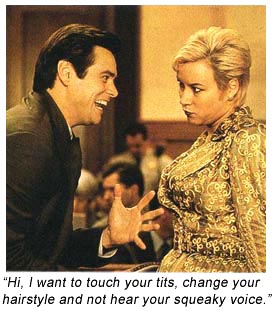 Fletcher Reede (Jim Carrey) is a lawyer aka, ergo, ipso facto, a liar. His little son Max (Justin Cooper) makes no distinction, as Fletcher is a callous dad who is always breaking promises to Max, putting his job first.

Max makes a birthday wish that his dad won’t be able to lie for one whole day. It comes true.

In LIAR LIAR, Carrey is once again directed by Tom Shadyac (who rocketed both their careers with ACE VENTURA PET DETECTIVE) and the result is once again as magical as the inexplicable force that compels Fletcher to tell the truth no matter the consequences.

The hook in LIAR LIAR is that Carrey plays a normal guy, not a “character” – and the honesty “curse” turns him into a “character.” Because he is just a regular man in the real world, his descent into truth and his resistance to it is all the more explosive. And his normalcy sometimes catches us off guard, highlighting what a brilliant dramatic actor Carrey can be when he isn’t careening off the walls, as when he blurts to his wife “I’m a bad father!”

Maura Tierney is Fletcher’s long-suffering wife, who has put up with his dishonesty long enough and plans to move to another town with her new vapid, yuppie boyfriend (Cary Elwes), taking little Max with her. Though his actions prove him discourteous, disrespectful and untrustworthy, Fletcher’s abiding love for Max allows him to see his faults, and it takes a day of telling the truth for him to realize what a big liar he’s been all his life.

Jennifer Tilly is the unethical defendant Fletcher must represent without the ability to lie. Amanda Donohoe is the office slut who exploits Fletcher’s honesty by asking him what he thinks of the office staff and the boss – in front of them.

Each scene is a Carrey masterpiece of ingenuity, of twisted faces and frenetic limbs, of speaking in tongues and grappling with oneself; as with his best work, it is indescribable and inimitable.

One of Fletcher’s clients calls him after being arrested again, needing advice, to which Fletcher “truthfully” screams into the phone, “Stop breaking the law, asshole!” Every time I call my own lawyer, I’m grimacing and waiting for him to say the same thing…

During Fletcher’s Truth Phase, Max asks him if it’s true that if you make weird faces they’ll get stuck that way, to which Fletcher assures him, “No, in fact some people make a good living that way.”