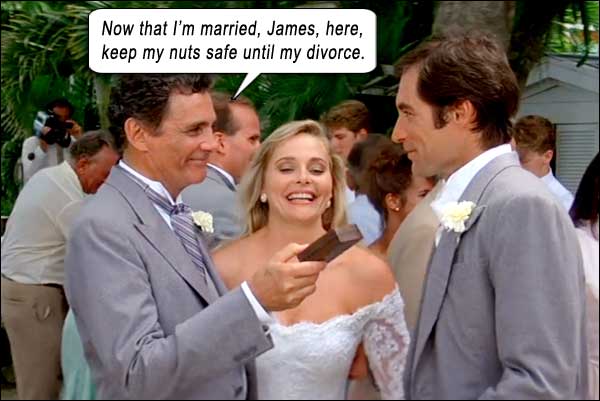 James Bond goes rogue, on a vendetta to destroy the man who tried to kill his best friend.

LICENSE TO KILL cold opens with a gag copied by Christopher Nolan himself in THE DARK KNIGHT RISES (2012)! On the fly, James Bond hooks a biplane’s tail to a helicopter to drag it into custody, nose-down ass-up! Exactly like Bane would hook a smaller plane’s tail to a larger plane 23 years later! Nolan has confessed to the homage.

Timothy Dalton returns as Bond for his second and final adventure, bigger, bolder and Bonder, in one of the best-crafted 007 films ever! (As a youngster, I completely missed the Dalton era, but now I’m annoyed that circumstances precluded Dalton making more Bond films. So sad how fate screwed him. From his two excellent entries, it is no surprise he would be chosen as the second-best Bond (behind Connery) in a recent 2020 poll.)

I grew up on the paperbacks in high school and Dalton is by far the closest, physically and emotionally, to Bond in the books. A manic depressive loner, cynical about class and money, but with a few shreds of decency left…
— Daniel Schaeffer, YouTube.

This is a Bond that ran out of shits to give before the opening credits.
— Clear Critique, YouTube. 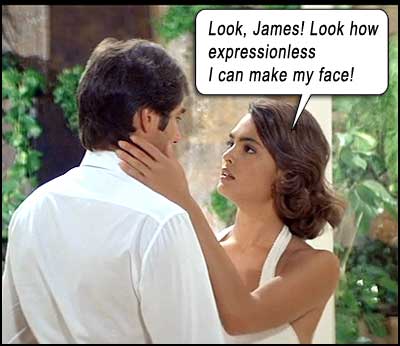 Bond and his CIA buddy Felix Leiter (David Hedison) are on their way to Felix’s wedding when a CIA chopper intercepts them with news they are picking up a wanted drug lord, Sanchez (Robert Davi – he was Agent Johnson in DIE HARD 1988… And in the CIA chopper is Grand L. Bush – he was in DIE HARD too, as Agent Johnson – The Other One!) In his tux, Felix answers the call of duty, with James tagging along.

Just before the CIA land, Sanchez is busting his loopy girlfriend with a lover, cutting out the guy’s heart (gruesome!), and then putting her across his knee for a lashing (hot!). Talisa Soto plays Sanchez’s girl Lupe, with a dull, unchanging expression on her unibrow throughout; one of those women terrorized by her man, who stays by his side sycophantically. Which makes her complicit in his crimes, and it’s anyone’s guess why MI6 and CIA don’t drag her in to testify against Sanchez. (Maybe it’s the ingrained misogyny; you see, when Lupe asserts, “He doesn’t tell me anything,” they just let her off the hook, because – why would a man tell a woman his plans? They take it for granted she is not involved or aware because – woman! Misogyny working against justice!) And with Talisa being such a blunt non-actor, completely NOT in the moment, we feel nothing for her predicament, even though we are meant to empathize with her later turning over a new leaf and falling for Bond.

With Dalton doing most of his own stunts, after he hooks Sanchez’s plane to his helicopter, he and Felix parachute to the wedding. How much more MAN can be squeezed into this Bond?! And – emulating the bridal dress tail – they walk into the church with their chutes trailing behind them… romantic!…

And thankfully – no more New Romantics! After Duran Duran and A-ha pandered to younger listeners, it’s back to the orchestral impact of a powerful Bond song, Gladys Knight ripping into License To Kill, with big, major-third intervals, copied directly from the GOLDFINGER soundtrack, conjuring that epic spy élan, arranged by rock conductor Michael Kamen. (The outro song, If You Asked Me To, is performed by Patti La Belle. Two great vocalists bookending the film, only adding to Dalton’s luster.)

After Sanchez walks, with the aid of CIA traitor Everett McGill as Killifer (well, the name sez it all, don’t it?), he returns with his right-hand man Dario (Benicio Del Toro, so young and angular, you could sharpen your knife on his face) to kill Felix and his new wife Della (Priscilla Barnes; she replaced Suzanne Sommers in THREE’S COMPANY.) 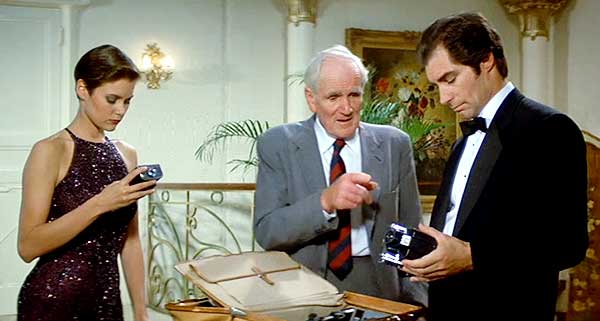 As soon as Q invents cellphones, Bouvier and Bond can’t resist texting each other.

Sanchez feeds Felix to a shark, which Felix somehow survives! (If a shark that size gets on top of you like that, it’s gonna take the whole bottom half of your body! After all the sharks Richard Maibaum has written into Bond adventures, you’d think he knows how they work by now.) Whereas Della is dead after what we presume is a gang rape. (Since when have penises been more lethal than sharks? And she still has all her lingerie on!) Bond finds Felix and Della, and is rabid to make Sanchez pay, even though his boss M (Robert Brown) orders him onto another case, correctly stating Felix is CIA business. Bond refuses the order – M revokes his license to kill! And Bond Spock-chops his way outa the base, M watching him flee, with a whispered wish, “God help you, Commander…”

Hedison is the first person to reprise the role of Felix, first appearing with Moore in 1973’s LIVE AND LET DIE. It would have made sense and been more compelling had he returned for this film’s predecessor with Dalton, THE LIVING DAYLIGHTS (I guess scheduling forced John Terry into the role as Felix), so the filmmakers are tasked with establishing that Felix is enough of a bro for Bond to go rogue for, so they create a strong emotional connection by making Bond Felix’s best man. At the wedding, Felix and Della gift Bond a cigarette lighter, with Felix alluding to Bond’s former wife, for more connectivity.

Like any spy who goes rogue, Bond can still do whatever he wants, travel wherever he needs, kill whomever he wishes, and acquire any spy gadgets necessary – like, how’d he get that snazzy manta ray suit to infiltrate Sanchez’s sub?! Musta been Q (Desmond Llewelyn in a meatier role than usual), who aids Bond throughout (explosive clock, camera gun, palm recognition, laser x-ray camera… manta ray suit?). Excited to be in the field, Q should be risking his own blacklisting by MI6 for helping 007, but there seems to be zero stakes for both these guys in being without Queen and country. License to Kill. Or not. Makes no diff. Q is told to leave many times by James, “You’re not a field agent” (maybe to drive home that he shouldn’t be aiding James illegally), but Q sulks and Bond lets him hang around. But dammit, MI6 should make Q a field agent after all the time he’s spent in the field babying Bond!

There is sadly minimal screentime for Caroline Bliss, the most beautiful Moneypenny to ever grace the Bond secretary desk. My heart aches.

Credit where it’s due to director John Glen (his 5th Bond) and writer Maibaum (his 13th Bond), for both going out big on LICENSE, their last involvement with the franchise. I’ve spat my share of insults at Maibaum, but in LICENSE, he pays off his usual non-sequitur foreshadowing elegantly: Killifer is eaten in the same shark tank where they threw Felix (owned by Anthony Zerbe, who recently tried to kill KISS with his impostors), and Sanchez is ultimately dispatched with the lighter that Felix gifted Bond. 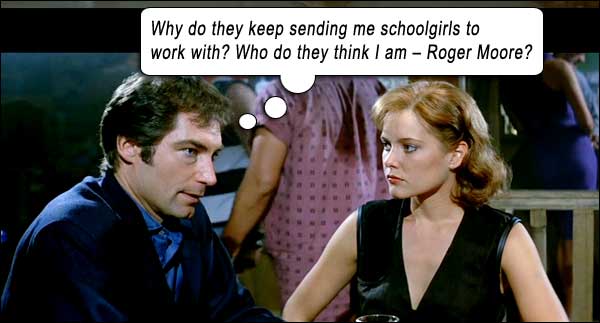 Carey Lowell is the Bond Girl, Pam Bouvier, one of Felix’s informants who aids Bond; schoolgirl beauty and womanly allure, even though her eyes point in two different directions. A strong, independent army pilot, who can take care of herself in combat, a very cool partner for Bond, nonetheless relegated to posing as Bond’s “executive secretary” to infiltrate Sanchez at his Mexican base. In the spirit of women’s lib, she asks, “Why can’t YOU be MY executive secretary?” Well, south of the border, it’s a man’s world, hon!

Bond offers his services to Sanchez, posing as a British government defector – to destroy his enemy from within. Meanwhile, other undercover operations are closing in on Sanchez (led by Cary-Hiroyuki Tagawa) – and Bond is getting in their way, so they kidnap him, with intent to return him to London. While he is tied to a table, Sanchez attacks – and “rescues” Bond inadvertently, who looks like a fellow bad guy being interrogated by these CIA narcs.

Bond frames a Sanchez flunky for stealing money from Sanchez. Sanchez inflates the flunky until he explodes in a pressure tank washer with all the stolen money. The best line – when a henchman asks Sanchez about the bloodied cash in the washer with the body, “What about the money?” Sanchez: “Launder it.”

There are CDs for their computers, rather than floppy disks, and James proves himself adept at working one of those green-text monsters – which is more than I can say for 5 years later – Pierce’s GOLDENEYE, where the attitude toward computers has changed to that of a feminine role.

It all boils down to Sanchez’s heroin smuggling, which someone really detests, as Bond just stabs blindly at heroin packets, spurting them everywhere underwater. Henchies cut his air hose, and he spearguns the pontoon of a seaplane and water-skis outa there barefoot!  Onboard the plane, more stabbing at money packets, bashing his assailants with bags of money that go scattering over the ocean; it’s like he’s in the thrall of destroying drugs for Christ or something… 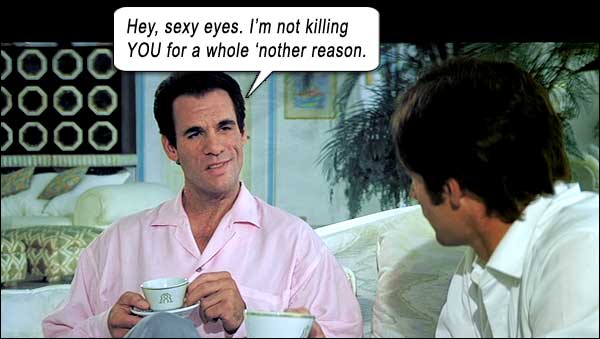 An exciting finale that reminds us of DUEL as we see plane against semi-trailer, semis impacting like a game of marbles, Bond tilting a semi and driving it on its edge, rocket launchers and Pretty Orange Explosions.

For some reason, undeserving Lupe tries to end up with James, declaring her love for him in front of Bouvier (Q shaking his head, knowing he’ll get sloppy seconds no matter the outcome), then immediately turning to a Mexican dignitary when Bond romantically dives into a pool to pull Bouvier into his watery embrace. Guess he prefers the lazy-eye to the unibrow…