He is the Soldier of Cinema…
— Werner Herzog, filmmaker.

LIFE ITSELF documents the storied life and tragic death of Roger Ebert (1942-2013, aged 70), the world’s most famous film critic.

Roger Ebert excelled at something that everyone thinks they can do, but which no one did better. A staff writer and editor for various papers as a young man, Roger came to film criticism almost by accident, when working as a general reporter for the Chicago Sun-Times and bequeathed the film critic job in 1967, when the resident critic retired. Somehow, his writing perfectly melded with what we now regard as “film criticism.” He seemed to have sprung fully formed, his style and structure remaining virtually unchanged from then to now – clear, incisive, knowledgeable, with a lemon twist of humor.

This moving 2-hour documentary covers Roger’s writing origins in the early ’60s, hanging with reporters, his descent into, and conquering of, alcoholism, his early career as a strong-minded writer and editor, his many books, his unfortunate dabbling in screenwriting for Russ Meyer (BEYOND THE VALLEY OF THE DOLLS, 1970), and his film critic status going supernova. His reviews changed career courses, his circles traversed directors, movie stars, rock stars and artists. On the definitive Internet Movie Database (IMDb), his web link goes against “External Reviews” alphabetical protocol and is listed at the top; he is the only film critic with a star on the Hollywood Walk of Fame (2005), and he’s the only film critic ever to win a Pulitzer Prize (1975).

Documentarian Steve James seems intent on “warts-and-all,” as he starts the tale of Roger Ebert near the end of his life – in a hospital, being treated for complications from throat cancer, his lower jaw having been amputated, his lower lip and chin now a cosmetically horrifying hanging flap of skin, communicating through a voice-simulator. Roger never wanted a smokescreen on his jarring appearance (posing for the cover of Esquire in February 2010), so we are up close and personal to these gruesome results of the operation that left him without a lower jaw and the ability to speak, eat or drink since 2006.

I only learned of Roger’s infirmity years after the event (continuing to read his reviews oblivious to his travails) and when it suddenly came to my notice, I raged in tragic sorrow. This irony was all wrong: all I could think of were the words of Chris Rock lamenting a world where doctors with all their medical prowess still had nothing for Christopher Reeve relegated to a wheelchair – “Superman can’t walk!” Here was a man of words who couldn’t speak! It’s too disturbing. Too heart rending. And I would constantly wonder how he kept going. Turns out – he didn’t want to, as he expressed to his wife Chaz… but we’ll get to that later.

Lifting many passages from Roger’s 2012 book Life Itself (narrated by Ebert soundalike, Stephen Stanton), and with narration from Roger himself via voice-simulator, director Steve James documents this giant’s grim final days, while inserting life history in segments, switching back and forth like a life flashing before your eyes before the final cut to black. Numerous personalities give their talking head’s worth, from political journalist Roger Simon to film critic A.O. Scott, from producer Thea Flaum to director Martin Scorcese.

… and then there were two.

From the day the “Chicago Tribune” made Gene Siskel its film critic, we were professional enemies.
— Roger Ebert. 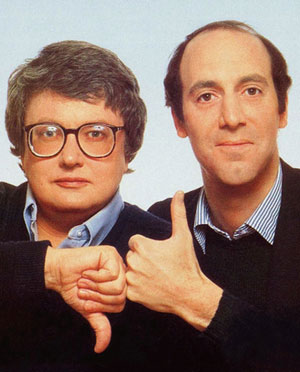 Ebert & Siskel. At Ebert’s insistence, it was always the other way ’round.

When Gene Siskel & Roger Ebert were thrown together haphazardly for a TV show previewing movies, they were both unseasoned television naifs, stiff, ineloquent, polite to each other, boring even, dressing respectively like a molester with a pornstache and a fat lesbian. As the show developed and underwent management and format changes, so too did their volatile chemistry, the fluidity of passion greasing their wheels; they originated the consumer-friendly “Thumbs Up/Thumbs Down” opinion system (how ironically meta that the story of Roger’s life would itself become a rateable commodity), and a love-hate relationship flowered. Mostly hate, at least that’s what it looks like in vitriolic outtakes from a bumper they were attempting to do in one take. (Later in this doc, we would see more outtakes from this same bumper, as they take playful jabs at each other and actually shake hands and agree on a common enemy. In a Wikipedia quote, Roger describes the relationship: “No one else could possibly understand how meaningless was the hate, how deep was the love.”)

Roger spent 23 years co-hosting permutations of that show with Siskel (its most popular incarnation called Siskel & Ebert at the Movies) which would make them reviewing superstars. (Is that even a term?) The ironic backlash: with popularity comes the criticizing of the critics themselves – by other critics. (n.b. Who Watches The Watchmen?) Siskel and Ebert were the popularizers, whilst around them, serious film criticism continued unabated in the shadows; muscular voices like Pauline Kael, David Edelstein, Jonathan Rosenbaum, Leonard Maltin, et al. Film scholar Rosenblaum pinpoints, “Consumer advice is not the same as film criticism. To assume that everything is good for everybody or bad for everybody is insulting to everybody.” Critic Richard Corliss wrote a scathing article alluding to “film criticism” like Siskel & Ebert’s being the McNuggets to the real meals of more studious film analysis. He’s right, of course, and Roger agreed. In a rebuttal to Corliss, Roger noted he would love to have a show with a bunch of film critics sitting around on an open-ended schedule talking for hours about movies – but who would watch it? “[Our] purpose is to provide exactly what Corliss says it provides: information on what’s new at the movies, who’s in it and whether the critic thinks it’s any good or not.” (The popularity of Siskel & Ebert and the manner in which film criticism has morphed into soundbytes and splash-phrases is more a commentary on the populace than the providers.) 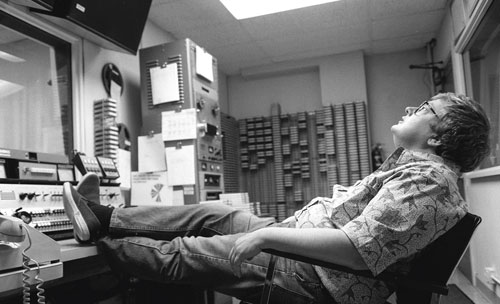 Roger Ebert simultaneously relaxing, watching a movie and being hard at work.
N.B. Find a job you love and you’ll never work a day in your life.

The slogan for LIFE ITSELF is “The only thing Roger loved more than movies.” That’s a demonstrably incorrect platitude. It is evident Roger loved movies more than life because he continued reviewing for almost a decade after the debilitating effects of his disease left him virtually lifeless (that is, what kind of quality of life does one have after being robbed of the ability to speak, taste, eat, drink, kiss, walk, sex?). Roger loved movies SO MUCH he subsumed his overwhelming human trauma to continue writing about them seemingly unaffected by his losses –  as evidenced by any of his reviews post-2006 (when the cancer started to win), and evidenced by my own ignorance of never gleaning he was suffering any especial trauma through his written word. No, Life meant nothing to this man unless he was immersed in that which he loved more than life itself – movies.

The latest footage of Roger finds him looking jolly, with Chaz by his side, fulfilling that oath of better or worse. Even so, I hate seeing the interaction between one person who is whole and one who is not: Chaz asks Roger, in that lilt we reserve for babies we are proud of because they tied their shoelaces all by themselves, “You’ve been writing a lot, haven’t you?” This man is a Promethean! Check your tone, woman! Especially on camera.

Director James asks Chaz, “Is it worth it?” and we can see her shaping her mouth around a well-worn platitude that she holds in reserve for just this damning question – but breaks down in tears instead: “He’s braver than me…” Uh, hon, that doesn’t answer the question. Because the answer is horrifyingly anti-social and goes against everything we are conditioned with from birth. Is it worth it? To continue grasping at a life which is no more a Life? We all learn within about 40 years of knowledgeable adulthood the answer is no.

Chaz describes Roger handing her a note: “Kill me.” She says she told him, “No! NO!” – and her attitude is that of talking to a disobedient German Shepherd – telling Roger it was “not an option.” As far as I’m concerned that kind of selfish, close-minded condescension shouldn’t be an option. If you laud this man for his honesty and intelligence, then it stands that everything he says is backed by same. So when he writes, “Kill me” it is not arrived at flippantly. How can anyone but he know the zero quality-of-life his life possesses? Honor his honesty. Honor his intelligence. Honor everything about the man that led the society he lived in to make this encomium.

In the end, Roger made a solo decision to sign a DNR form (Do Not Resuscitate [how many of us first heard of DNR from Livia on THE SOPRANOS?]), or the horror of Quality-less Life would have continued to be thrust upon him interminably. As it is, he was way past the ballgame; Chaz let him fade and burn out in a most emasculating manner that no towering public figure should have to endure. I’m not saying she is a villain or bad person for doing this; I’m saying our conditioning and bias toward this condition of “life” does not let us easily choose non-life as an option – even when it’s obviously the best option.

Roger’s last emails to the filmmaker are heartbreaking as he types in response to documentary questions, simply, “can’t” and “I’m fading.”

The most touching moment of the film is when Ramin Bahrani (writer-director MAN PUSH CART, 2005) is gifted a box by Roger, full of wooden puzzle pieces. A letter from Laura Dern to Roger accompanies the gift, where she outlines the box’s history: given to her by the Strassberg family, who were given it by Marilyn Monroe, who was first given it by Alfred Hitchcock. When Ramin refuses the gift, Roger insists, “You’re going to accept it because you have to one day give it to somebody else who deserves it!”

During Roger’s eulogy, the congregation raises its thumbs in salute.

On the day before he died, Roger thanked us for going on this journey with him. No, the thanks is all ours, Roger, for creating a journey where none might have existed before for us jabbering cucumbers. You gave respectability to all of us barely-literate poison pens scribbling in the fluttering dark.

Thumbs Up to you, Mr. Ebert, the greatest cucumber of us all.