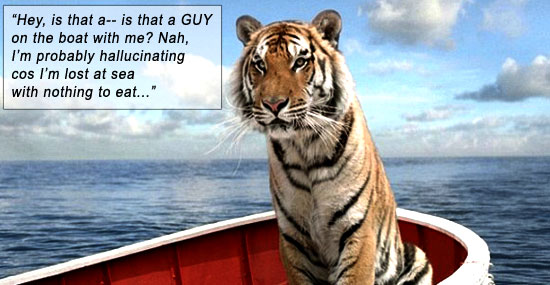 The Gripe with Pi.

Get rid of all the religiosity and Ang Lee‘s LIFE OF PI would be an intriguing adventure and unique thought experiment. But with the muck of God pervading every second line of dialogue, it makes me want to crucify somebody.

Indian teen Pi Patel (Suraj Sharma) is onboard a ship, journeying with his family from India to Canada after selling their zoo. With many of their animals onboard, the ship hits a storm and sinks, tragically killing Pi’s family, the crew and all the animals – except for an orangutan, a zebra, a hyena and a Bengal tiger, which all escape on a lifeboat with Pi. So begins the remarkable-stupid adventure…

Told in flashback, LIFE OF PI starts with a writer (Rafe Spall) visiting the adult Pi Patel in Canada (played by Irrfan Khan), referred to him because he was told that Pi had a tale that “will make you believe in God.” Immediately I dry-retched. Pi relates the tale of his childhood in India, living at his father’s zoo, and the lessons he learned around fierce creatures (faced with the zoo’s resident tiger, nicknamed Richard Parker), and fiercer creatures (girls).

Pi’s father (Adil Hussain) encourages the young Pi towards rational thought, yet Pi explores three different religions, trying to figure, I presume, which is the wrong one. Answer: all of them. Pi’s father once again makes that stupid mistake that plays right into the hands of the religious clods: he treats “Science” as if it’s an alternate religion. I’ll say it for the 400th time: Science is a methodology. It is not an alternative to your religion – it’s a reality to your fantasy.

Pi seeks the advice of a priest, who was trained in the Mark Wahlberg Method of pushing air out of your lungs when your lungs aren’t expecting it. Consequently, he learns nothing from the priest, except bicep curls. The complete first act is so drenched with religion, it almost made me forget which devil I sold my soul to.

Director Ang Lee is a good filmmaker (CROUCHING TIGER, BROKEBACK MOUNTAIN), and this film is brilliantly made. But it’s also stupid. There are scenes that will draw the breath from your lungs (much like the Mark Wahlberg Method) and stun your heart into accidental romance. And there is dialogue that will make you wonder how your own species could be so irretrievably credulous.

When Pi’s family boards the ship to Canada, Gerard Depardieu cameos as some kind of Soup Nazi.

The religious dialogue is now so heavy it sinks the ship. A jaw-dropping scene, as Pi dives overboard and sees the ship underwater, going down right before his eyes, lit up like the mothership from CLOSE ENCOUNTERS. I guess God couldn’t hear all the prayers from way out at sea like that. Or did God intentionally drown his parents and brother? Nice. God also drowned all those animals? Way to go. God also sunk that ship, right? And if not, why didn’t His Almighty Hand hold it aloft when the Devil tried to sink it? Can we dispense with the deity dialogue now? But though the story moves on (with Sharma playing the teen Pi onboard the wild kingdom lifeboat), the godspeak just doesn’t let up (through Khan’s narration).

So here we are: stranded on an endless ocean in a lifeboat, with limited supplies, and four wild animals, two that want to eat everything else.

It’s almost credible. Though we never quite suspend our disbelief, we’ve already paid for the parking and we don’t want to walk out with our plastic faux-pizza still warm. So we sit and watch and work through that ‘suspension’ shit. And eventually the bravura cinematography (by Claudio Miranda) wins us over. Not the insufferable religious pontification, not the contrived plot (of the tiger spending half a day under the tarpaulin before making its presence known), but the splendor of the movie-making experience, that will move you to tears. The serene beauty of the mirrored ocean, the awe of the whale encounter, the luminous night creatures, the sheer, unadulterated majesty of the sea and sky and nature’s wonders. In other words, LIFE OF PI is like a child or a blonde: it should be seen and not heard. Because even whilst the visual gluttony is selling the film, the narration continues to undermine it. 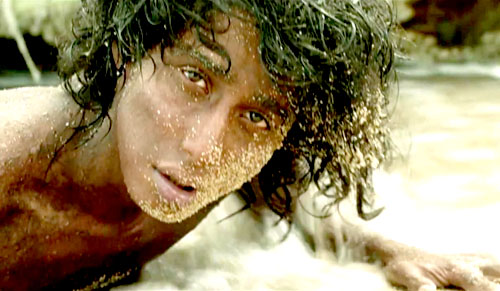 Yann Martel might have crafted a compelling novel about a lonely boy’s struggle to endure, but could David Magee transpose that credibly to a screenplay? And then, could an actor purvey that nuance of innocence, anguish, courage, endurance, anger and compassion? Enter Suraj Sharma. The movie’s greatest asset. In his debut movie role, asked to command the – ahem – lion’s share of screentime, Sharma is a force of nature to be reckoned with. He doesn’t just tame the tiger, he tames our uneasy breasts. He – and not the tiger – is the reason the movie roars. Unlike many of the Indian actors here that earned their bones in Indian cinema before breaking into America’s consciousness, this intense young man now has Hollywood at his feet.

Then they put dumb words in the poor guy’s mouth: “The terrible one – Richard Parker – he kept me alive.” Really? How? Did the tiger find God too? Near the end of his stamina, Pi puts the emaciated tiger’s head in his lap and looks to the sky: “Mama, Papa, I’m going to be seeing you soon.” Sorry, kid, you’re not. No matter how many religions or gods you’ve wasted time venerating, you’re not gonna see them in any traditional sense. And when Pi makes land, he presses his face to the sand: “It was warm and soft, like the face of God.” Stop saying stupid things! Like you’ve EVER felt the face of God! How about an evidentiary statement? “It was warm and soft like the breast of Salma Hayek.”

(But hold on a minute: wouldn’t it have been good to go to whatever mythical afterlife you’ve deluded yourself is real to meet your parents? Why are you so happy that you lived? These religionistas love having it both ways – live or die, it’s all good. That’s called ‘greed,’ all you Christ-ies and Buddha-pests and Allah-ites; pretty sure your Big Guy detests that…)

No matter the unreality of the tiger’s begrudging pet-dom (it really didn’t need to suffer emaciation if it just made a pie of Pi), when Pi eventually loses Richard Parker to the forest, limping into it without looking back, it’s like Tom Hanks losing Wilson. And the tears will flow…

At film’s end, we return to elder Pi and the Writer, who doubts Pi’s account. To bolster his story, Pi doesn’t offer any further evidence, just platitudes: “Faith is a house with many rooms.”
Writer: “But no room for doubt?”
Pi: “Oh, plenty!”

I can stand this bullshit no longer! NO religionista truly “doubts.” Oh, they pretend to doubt so they can say they’re “searching” for answers. Snigger. But religion – by their own admission – is a faith-based institution, which, by definition, needs no evidence or proof, which means they can “doubt” and then clear that doubt immediately by “having faith.” So please stop saying stupid things!

In SIGNS, writer Shyamalan inserted an undercurrent of religion/faith that never intruded on the tale and paid off at the end as a powerful plot point. For those who believe I would demean any movie that involves God/Jesus simply because I am a-theist, check JESUS CHRIST SUPERSTAR, THE BOOK OF ELI, DOUBT, INHERIT THE WIND, SIGNS, et al. It’s not the fact that a writer wants to push his religious views – it’s how he does it. And LIFE OF PI shoves it like turd blossoms down our throats – with the insufferable air that even if this tale is fantasy, the concept of “God” is Truth!

Pi the elder promised a tale that would make us believe in God. Now, even more than before, I believe in clods, not gods…

The High C’s.
Pi doesn’t want to leave the zoo, or India, the country he loves, but his dad, upon deciding to sell the zoo and seek their fortune overseas says, “We will sail like Columbus!” Pi: “But Columbus was looking for India!” It’s the funniest line in the movie, but it also reminds us of ignorance sailing the high seas of the American mainstream.

The true nature of Columbus’s voyage is readily available anywhere you seek it online, and it may well be taught in schools, nonetheless, the general timbre of American thought is that Columbus “discovered” America intentionally, “because he was trying to prove the Earth was round.” But I guess in India and other more enlightened locales around the globe, people are more aware of the reality of Columbus’s voyage trying to establish a trade route for Spain, and accidentally stumbling upon the land mass now known as these United States.

The reality-stupidity lives with us every day, in the blatant misnaming of the American Natives as “Indians” (because Columbus thought he had found India), yet American kids are still bludgeoned with the Round Earth nonsense – by people who ironically display the same provincial ignorance as those who thought the Earth was flat!