Bradley Cooper takes a pill that makes him even sexier. Now how is that even possible? 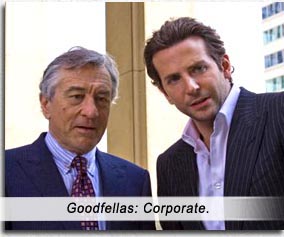 LIMITLESS is a breezy fantasy about a shiftless writer, Eddie Morra (Cooper), who is given a mysterious pill that allows him to access 100% of his brain, instead of the usual 20%. A super-man tale (or, in the case of Cooper, a super man-tail) where the protagonist is suddenly faster, smarter, stronger; a regular Steve Austin (without the boing-oing-oing-oing sounds).

The pill uninhibits his brain’s retention and recall, allowing him to access any information he has ever come in contact with, even peripherally.

He discovers its utility in the manliest of ways, as he talks his landlord’s wife into bed after screeching at him for the rent: “Information from the odd museum show, a half-read article, some PBS documentary; it was all bubbling up into my frontal lobes, mixing itself together into a sparkling cocktail of useful information!… She didn’t stand a chance.” He wasn’t high, wasn’t wired. Just clear. He knew what he needed to do and how to do it. On the pills, he thinks of himself as Enhanced Eddie.

His social circle suddenly includes stockbrokers and Euro adventurers; his book gets written in four days; his rocket-synapsed mind allows him to explode his income by tracking stock trends; income augmented by counting cards at the blackjack table. Women, cars, private jets… He wins back his girlfriend (Abbie Cornish) and gets involved in a global corporate merger… And his eyes turn an even sexier shade of preternatural baby blue.

But being dependent on the illegal pills (known as NZT – had to have a ‘Z’ for action-movie cred), supplied by his drug-dealing, murdered, ex-brother-in-law, means that when the pills run out…

Movie smartly intertwines a clutch of mysterious characters that orbit Eddie, all somehow connected with the pills or their results. Robert De Niro as corporate raver Carl Van Loon; Andrew Howard as a fearsome Russian mobster; a constant tail shadowing him (Tomas Arana – not his own Enhanced man-butt); and a detective (Brian Anthony Wilson) that isn’t fully convinced Eddie didn’t murder his ex-brother-in-law.

When Eddie’s ex-wife (Anna Friel) contacts him, we learn of the full spectrum of the pill’s affects, including the coming crash…

When he is mugged, we see Eddie accessing his memories for old Bruce Lee films and even snippets of self-defense videos he saw in passing a store window, bringing it all to bear in a cool, studied trouncing of his assailants. That’s why this film works – we want to be this guy. Even for a few moments. We’d all give up some degree of security, sanity and safety for one chance – (as Mel says in BRAVEHEART) Just One Chance – to live the life that our youth and dreams promised us. Let’s face it: we’d give up almost anything to be “the perfect version of ourselves.”

Interesting to note that when Eddie wakes after his first pill wears off, he laments his unenhanced state, “I was back.” Later, only when he gets a pill into him does he say, “I was back,” meaning he now considers Enhanced Eddie his true self. Unwitting commentary on those who rely on Zoloft, Valium, Prozac, or any medications (from aspirin to heroin) to consider themselves able to function correctly, as their “true selves.”

LIMITLESS is a very plausible science fiction story (almost Harlan Ellison or Robert Heinlein), written by novelist Alan Glynn, directed by Neil Burger (THE ILLUSIONIST) with some nice disorienting camera tricks, good pacing and solid story twists. It never gets too dark, even when the Russians are trying to kill Eddie by “cutting your skin at the waist and pulling it over your head. You don’t die from the cuts, you die from suffocation.” But it does have a gut-punch vomit moment when a dead Russian’s blood is seeping towards Eddie on the floor and he realizes that the last of the NZT is in that Russian’s blood, so in a classic junkie move – he starts slurping the seepage!…

Can I get a big helping of “EUUURW!” with a side order of AIDS please?

LIMITLESS has no agenda, and I’m not saying it is making a sociological statement – it is just a good action movie – but those who may ask themselves how Eddie can continue taking a drug which is threatening his life (internally and externally) should consider some of the prescription drugs commonly available to the hypocritical, desensitized public.

So we’re not even talking about being “super” – we’re popping pills just to be “normal” at the risk of loss of Quality Of Life itself. Just IMAGINE what we’d do to be “super”!