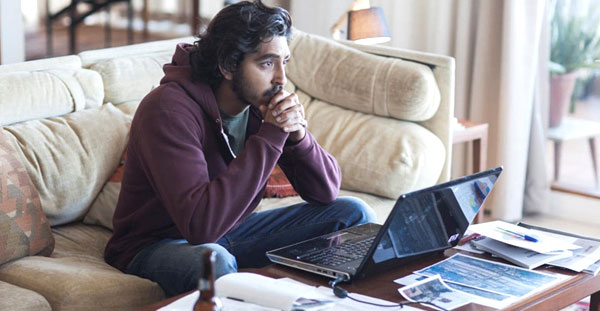 Separated from his mother in India at 5 years old, adopted by an Australian couple and raised in Tasmania, Saroo Brierley, 25 years later, tracks down his biological mother in India through the magic of Google Earth. And a privileged white lifestyle.

Taking nothing away from the inspiring effort of Saroo and the overwhelming poignancy of his quest, there is yet an awful irony underpinning LION, which the filmmakers don’t focus on for fear of diluting its river of tears.

But we’re getting ahead of the story:

One night, Saroo accompanies Guddu (Abhishek Bharate, also magnificently naturalistic), to a train station to scrounge for odd jobs. Instructed by Guddu to wait on a platform for him, Saroo falls asleep on a bench, wakes hours later, searches for Guddu, and accidentally boards a train bound for Calcutta, 1,500 kilometers from his home.

Lost. With no way, or knowledge of how, to get home.

After sad scenes of Saroo trying to communicate with commuters and other abandoned street children, he is taken in by a woman who, overnight, turns from benefactor to malefactor, as we realize she scoops up homeless kids for men with disturbing intentions. Not fully understanding the oddly sexual scenario, Saroo hi-tails it out of her place after a man stops by to smilingly prod and grope him.

Saroo ends up in an orphanage, where he is adopted by Australian couple John and Sue Brierley (David Wenham and Nicole Kidman in very gauche hairstyles), who fly him to their home in Tasmania (that little triangular island under the mainland, kinda like Australia’s Hawaii).

Grown, a powerhouse Dev Patel assumes the role of Saroo. (Patel looks rugged; matured as an actor, and come into his own since his breakout role in SLUMDOG MILLIONAIRE.) Around 29 years of age, about 2010, Saroo starts searching for his Indian home.

I’m sure this irony must have crossed Saroo’s mind many times: that he was only able to find his mother in that Third World country halfway across the globe, due to being adopted by a couple from a First World country. If Saroo had spent his life in the Indian orphanage, he would have died there none the wiser about his mother’s fate. I’m sure he must have often slammed up against conflicting emotions as he Google-searched for a ghetto, from a room overlooking a beach, downing beers, while beautiful crimson sunsets glistened over a city where he could acquire whatever his heart desired – including a computer, the internet, an apartment, a job, beer, and a ticket to India.

Thus it seems screwy for Saroo to accuse his longtime girlfriend (Rooney Mara) of being “privileged” and to turn away from her, when she doesn’t share his obsession – an obsession only able to be fed due to being adopted by a couple from a First World country. So there’s a pragmatism that underpins this story – it’s only because Saroo possessed a privileged lifestyle himself that he could afford to be so cavalier about looking for his past.

Nonetheless, you will watch LION with tears edging your eyes.

1987. When young Saroo boards the plane for Australia, we hear a snatch of Mondo Rock’s State Of The Heart, which, for an Australian, places us directly in that ‘80’s era (and gives us a musical cue on Saroo’s changed psychological state). Though Saroo approaches every beat of his new life with trepidation – arriving at Hobart, stepping into his foster parents’ home – there is an undeniable change in tone for the better; a pervasive feeling of hope, quietude, cleanliness, clamor annulled, and relief mixed with doubt that this could be real. Yet deep down, would crossing that Australian threshold mean that Saroo’s real family were lost to him forever?

That loss must have germinated in his psyche, for him to have embarked on his journey of retracing his heritage all those years later!

John and Sue Brierley also adopt Mantosh, another young Indian boy, healthy in body, but with psychological problems. Played by Divian Ladwa as an adult, Mantosh would retain the habit of hitting his head reflexively when anxious, and did not pursue any noteworthy career path, which the film plays out unflinchingly.

As Saroo tells his adopted mum after he starts his quest, “You also adopted our pasts.” 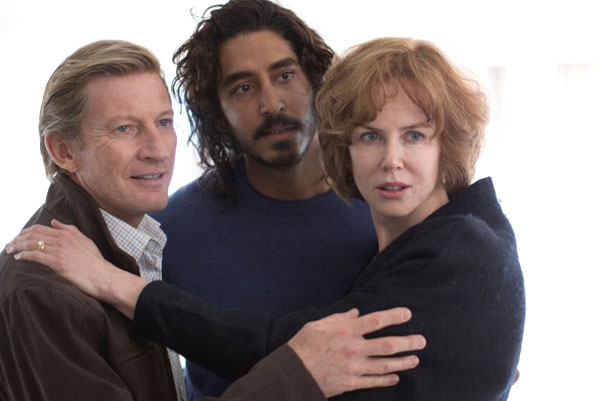 A game of Twister until our hair calms down.

And that is the other tragedy of this tale: How does Saroo tell his adopted mother Sue, who lavished all her love on him, that he is looking for his biological mother? Would it not tear her apart, and make her feel like she did not sacrifice enough? Can any movie truly portray how wrenching the moment when Saroo finally showed Sue his research, after months of plotting rail routes and search areas on a giant wall map?

As with all “true stories,” LION takes its dramatic liberties, and real life Saroo relates how his actual mother supported him from the very beginning of his quest. It was not a secret to her. There is another filmic moment for which Saroo commends the filmmakers: Nicole Kidman gives her all in a staggering emotional moment when she confesses to Saroo (Patel) that she and her husband opted not to have children of their own, even though they were able to, because they wanted to help children less fortunate. “That was why I loved your father – we both had the same vision.” Stunned Saroo had taken it for granted his adoptive parents were barren!

Real life Saroo has remained silent though, on exactly what the filmmakers were going for with Nicole Kidman’s hair.

When Saroo attends a hotel management course in Melbourne in 2008, he discovers Google Earth, through a group of cosmopolitan friends. In the movie, his wanderlust is awoken when he spies a dish of jalebis (Indian sweets) during a dinner with these friends, and almost breaks down as he “confesses” to the empathetic group that he is “lost.” Who knows how this desire would have gradually piqued in real life Saroo? The end result is: the search was afoot, calculating train speeds from 25 years ago, scouring his memory for landmarks; growing apart from his girlfriend…

I find it amusing that the film uses Rooney Mara’s character to represent both girlfriends Saroo had at the time of his quest; the first, he lost to his obsession, the second, he apparently spent lots of time with due to her fast internet connection (that’s not a metaphor! – for all you under-30s, there was a time when online information didn’t just “pop up” onscreen the moment you clicked on it!). Thus, even as Saroo grows distant from Mara (as per gf #1), we see her waking in an empty bed, to find him out in the loungeroom slaving over the computer (as per gf #2). This factoid is not apparent in the movie – just an amusing footnote when researching Saroo.

Dev’s Aussie accent is very good, and it’s funny hearing him do it so well. He’s also got the “interior bearing” of an Indian raised in Australia, meaning, he denounces his heritage when questioned if he is Indian – “I’m not really Indian, just born there, raised in Australia.” It’s not a mean denunciation or racist slur; having been raised by white Australians, Saroo merely identifies with them, more than the people of his ancestral heritage, of which he only shares distant genes, not cultural upbringing.

Filmed in the actual locations where Saroo lived his life – from the hovels of Ganesh Talai to breathtaking vistas of his Australian bush locale in Tasmania – LION is truly what so many movies advertise themselves as – an emotional journey! When Saroo identifies that specific train track that bore him, and then the landmarks along the way, we are in his head, in his racing heart, and scampering around in his unruly hair. But I do question: How were all these locales unchanged after more than two decades? Old structures like water towers and bridges appearing on Google Earth – we marvel at the poverty and/or laziness/corruptness of the government bodies that did not refurbish these edifices over 25 years! 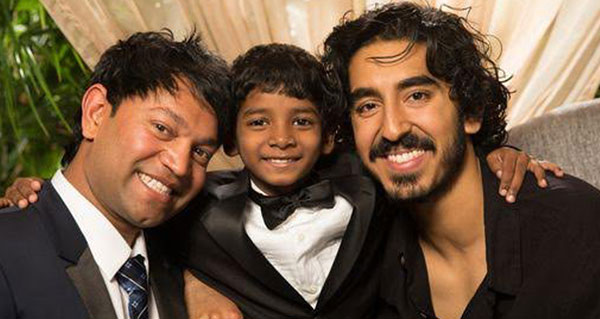 By February 2012 Saroo had found enough evidence to make the journey to India, and actually walks the tiny alleyways, in a daze, to his stone hut… Patel is now in Oscar territory with these final scenes, emotions warring within him, wonder, fear, sorrow, nostalgia, determination… and now the other grim reality must be faced: if his mum was actually still living in that hellhole – what a horrifying existence!

As it happens, she had moved out of that hovel to a nearby residence. A passing man who could speak English (as it happens, this actually transpired) leads Saroo to his mother.

Having forgotten his Hindi language, Saroo and his mum embrace tearfully in two different languages. He discovers Guddu died that night – hit by a train – and his mum, hoping against hope that Saroo would one day return, never moved away from the area. Movie depicts Saroo always having fanciful visions/dreams of his brother crossing the train tracks – of course, his brother will always be that age in his memory, and tragically, there would never be any other age for him; real life Saroo relates there are not even any pictures of Guddu. A river of tears for these final scenes.

2013. We see coda footage of real life Saroo introducing his two mothers to each other, in the village of his Indian mum. Oh God! The tears, the tears…

The final title card tells us that all his life, Saroo had been mispronouncing his own name. His given name, Sheru, when properly pronounced, meant… LION.

“State Of The Heart” ♦ Mondo Rock