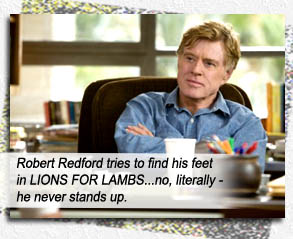 Lest we forget: Robert Redford once brought down Satan Nixon in ALL THE PRESIDENT’S MEN; in LIONS FOR LAMBS, he goes for the neck-wattle of Demon W. Bush.

Razor-sharp writing, controlled direction, magnificent performances, LIONS FOR LAMBS is a wake up call to America – wake up and smell the lunatic euphemisms the Republican administration is shoveling down your incognizant throat!

A call to arms – but not as warmongers, rather, to be involved in the political process so that something as deceitful as the Iraq War will never be sneaked past the noses of the half-asleep again; a cry for freedom – but freedom via intelligence and knowledge, not freedom by sacrificing civil rights, or freedom as catchcry for wanton killing.

Not an action film – but a call to action. A barbaric yawp across these Dis-United States.

Directed by Redford, written by Matthew Michael Carnahan (THE KINGDOM, 2007), LIONS FOR LAMBS follows three discrete stories, all linked by their involvement in the world-wrecking stupidity of George W. Bush’s illegal Iraq War: a teacher and his student, a journalist and a Republican senator, an American military commander and his men.

The inspired last shot of this opening montage is journalist Janine Roth (Meryl Streep) opening her notebook – to a blank page. WE are that blank page, culling perspective from all the information we are fed, right or wrong. The sociology of a nation shaped by words on paper.

Whereas Streep played the slimy government role in RENDITION (2007), now Tom Cruise fills those brave shoes; brave because you risk becoming personally disliked playing smarmy government douchebags. And at this point in his career – with his Q plummeting due to Oprah’s Couch (among other silliness) – maybe Cruise plays Irving too damn well. Which actually showcases the man’s acting talent. He shows us what an aw-shucks, all-American Boy he can be, while spouting Republican “talking point” utter garbage through that radiant smile.

There, I said it: “Republican.” Redford never wanted this film to be labeled a leftie rant, nor is it, yet when all sides of the Middle East Conflict argument are presented, the Republicans always end up looking like the backpedaling, lying thugs they are. Objectively speaking. 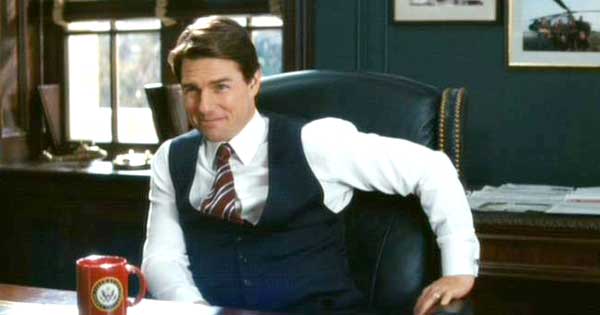 Tom Cruise: miscast as a congressman… but perfectly cast as a good-looking, lying, vacuous, two-faced prick. (Isn’t that a congressman?)

A former “maverick” (how I hate that word now that the despot McCain has co-opted it), now a yes-boy, Irving blind-sides Janine with “implementation of a new strategy” – propaganda that he hopes she will swallow unquestioningly since she did a favorable article on him eight years prior. But she sees through his “new plan to win the hearts and minds of the people” as the same rationalizations and excuses for getting into Viet Nam and Iraq. It makes him smile wider and scarier.

Her intelligence is futile, pitted against the robotic talking points of Irving. Every time she leads with “causes of how they got into the unwinnable position,” he would counter with “how we got here is not important.” Never has there been a movie with so many Republican “talking points” thrown together in such a lucid indictment. We hear it all in LIONS FOR LAMBS: “fighting them over there,” “they attacked us,” “surrender or win?”

We find that Irving’s Grand Plan (which the press is not even allowed to verify by placing embeds with the soldiers) is nothing more than another stopgap attack (which we see played out by Falco’s military unit); another non-sequitur “strategy” to keep the sickness alive to keep the ruling party in power. To keep lipstick on pigs.

Bum-boy Bushie, General Petraeus himself, has said he doesn’t know whether America is any better off with the War In Iraq, and that there was no connection between al-Qaeda and 9/11, yet the yes-boys stay “on message” and continue to lie. And the sheep keep swallowing it.

BACK AT THE RANCH: Professor Malley counsels Todd (newcomer Andrew Garfield), a bright student, slipping towards apathy. At first, it seems like Malley is entreating him to join the military, but it becomes clear that Malley’s intent is to inspire Todd to do something – anything – that would get Todd off his ass and care, or at least pay attention to the world around him. Todd is an inexperienced version of John Q. Public, someone who has read about the pitfalls of society but not experienced it viscerally; and though he has a point when he defines the bloated hypocrisy of politicians and the wasteful apathy of the middle class, Malley’s answer is not to become one of them, but to be more than they are.

WHILE ON THE RIDGE: Falco’s men discover their “intel” was wrong (oh! big surprise!), two soldiers falling out of a chopper into hostile territory (Michael Pena and Derek Luke), crippled, helpless and running out of ammo while al-Qaeda stalk them. These segments of the film are tiring (we’ve seen this all before), and only exist to illustrate how wrong-headed and ineffectual Irving’s strategy is. The two stranded soldiers were in Malley’s class; one of Malley’s greatest regrets was that he inspired them to “care” and they squandered their energies on the Viet Nam-esque mistake of Iraq. 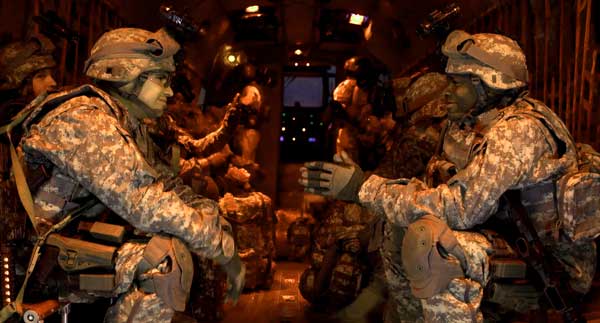 It is during a flashback lunch with them that Malley quotes the lament of a German General, who referred to the British military and their soft commanders: “Nowhere else have I seen such lions led by such lambs.”

Lions the troops may be….

… but isn’t it about time to admit that military volunteers shouldn’t really ask for, or receive, our sympathy?

If you want the greatness in braving the dangers of your vocation, don’t look for sympathy when those dangers overcome you. That’s a cheap shot against people who were too smart to volunteer in the first place. If you can’t get it through your muttonhead that volunteering for the military MIGHT GET YOU SHOT, you shouldn’t be trusted with a gun in the first place.

Lt. Falco describes al-Qaeda recruiting techniques, “…going door to door, asking families to give up their sons; if they don’t, the sons are executed in front of the families.” Surprisingly, his American grunts exhibit outrage at these tactics…. Guess none of them have been stop-lossed yet, and had to go AWOL to escape that federal illegality, or had to go underground and steal to live; or been driven to suicide, their families destroyed… al-Qaeda would be proud of the Amerikan military…

Janine (Streep) is a smarter version of John Q. Public; she asks the right questions, but gets no answers or is simply fed lies. When Irving tells her the “new initiative” has been launched during their interview, he awaits news of its success (which would not have been a forward step anyway); when the call comes that Lt. Falco’s mission was a tragic failure, he simply continues lying to Janine. That’s Our Republican! Don’t take my word for it. Don’t take this movie’s word. Look around. Smell the fucking shit they’re shoveling.

In the end, Janine’s conscience can take it no more – though her editor (Kevin Dunn) wants to simply print the propaganda that Irving spewed, Janine refuses to write the fact-free article, quoting The Who: “Meet the new Boss / Same as the old Boss.” The stock that she lost in RENDITION just went through the roof.

It is easy to understand why so many anti-war movies hit theaters in the last two years; it is harder to understand why none of them has been successful at the box office even though approval of the Iraq War has been abysmal since these movies started hitting.

It is rare to find a movie so articulate, intelligent and thought-provoking, which is one reason why LIONS was another anti-war flop – because the American people have proven that they are exactly the opposite (to wit: voting in W twice).

The public may be weary trying to wrap their heads around the complex issues that the Iraq War raises – but even when the issues are brought down to Great Unwashed level (as when Ron Paul ran for president and simply told the honest truth: The War Costs Money – Yours!) America still stuck its fingers in its ears and went, “La la la la–I can’t hear you, I can’t hear you!”

With lambs this deaf, no wonder we lions have to roar so loud…