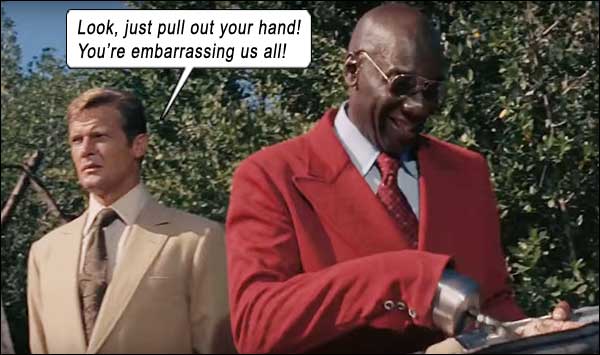 That voodoo that Bond do so well.

What does it matter to ya?
When you got a job to do, you gotta do it well.
You got to give the other fella hell!
— “Live And Let Die” – Wings

James Bond 007 takes on a heroin kingpin and his voodoo priestess, infuriating the kingpin when he grabs the priestess by the tarot.

With its bayou backdrop, LIVE AND LET DIE reminds us of DR. NO, yet this 8th film in the Bond franchise (from the 2nd Ian Fleming novel featuring James Bond) retains a unique flavor in Bond canon, with its Caribbean locales, voodoo symbology, African-American cast, a theme song driving it ten steps into mayhem, and the best Bond Girl in history, Jane Seymour. And a smugnificent new Bond – Roger Moore.

Of the three men who had played Bond to this point, 45-year-old Moore was the first Briton, Bond’s real heritage from the novels. (Connery was Scottish, Lazenby was Australian.) With the blessing of Sean Connery (who turned down $5.5 mil to reprise the role after his 6th film), Moore would actively take a more humorous tack to differentiate himself from the First Bond. The smug was just gravy.

To illustrate how magnificently Moore acquitted himself, when debates would inevitably arise on ‘the best Bond’ (back in those pre-1990 dark ages), the options would devolve to just he and Connery, even though 4 actors had suaved the role (Connery, Lazenby, Moore and Dalton). Only after Brosnan had established himself as the 90’s Bond and Craig had slammed down his 2000’s Bond did the argument widen to include all the other actors in the franchise.

Apparently, Clint Eastwood was offered Bond in LIVE AND LET DIE. Declined. I still can’t figure whether that decision would have made our day or not… 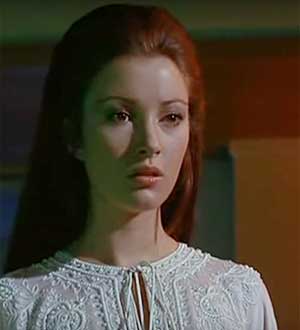 After three MI6 agents are killed while tailing a suspicious businessman named Kananga (Yaphet Kotto), Bond is dispatched to the fictional island of San Monique to stop Kananga doing the wanga-banga on their badanga-janga.

Like THE MAGNIFICENT SEVEN, this movie’s soundtrack adds worlds to its thrust (composed by George Martin, producer to The Beatles), with the Oscar-nominated theme song Live And Let Die written and performed by none other than Paul McCartney and Wings. Majestic pounding chords and driving riff; for all the music the Bond films had turned into chart gold prior to this single (with Shirley Bassey, Dionne Warwick, Nancy Sinatra), here was a chart-topping rock anthem for a new generation (U.S. #2, Canada #2, Australia #5).

That generation was undergoing upheaval on so many fronts, and 1973 was smack in the midst of blaxploitation; Bond’s producers were as prone as any filmmakers to emulate the tenor of the times, and this is the first Bond film to show its pasty British arse in urban America (Harlem!), the first to have an African-American Bond Girl (Gloria Hendry as Rosie), and the first to incorporate American racist tropes. At one point, an agent screams, “Get me a make on a white pimpmobile!” – like Pimpmobile is a make of car.

Kananga boasts an entourage of eccentric characters – Tee Hee (Julius Harris, whose oomph Bond gimmick is a mechanical arm and claw hand — although it’s so laughingly obvious it’s just a claw held by his real hand up his sleeve), Baron Samedi (Geoffrey Holder, a fey witch doctor) and psychic Solitaire (Jane Seymour, the most beautiful woman in the world at this juncture in Earth history; merely 22 at the time, with perfect features, a waist you could wrap your palms around and waterfall locks draped to her lower back), whom Kananga uses to foretell his every move. The classiest and most enticing of Bond’s beauties, Solitaire – unlike all other Bond Girls who exploit their sexuality- is a tragic naïf, pure of heart and groin (which would almost be her real life status were Seymour not married recently to Richard Attenborough – lucky dog!), who believed her powers lay in the tarot cards, not in her lay. 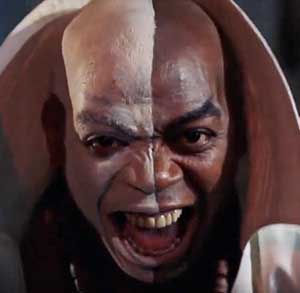 Inspiration for Paul’s “Ebony And Ivory”?

The MI6 cast is re-introduced early, to form a connective tissue with the former Bond. M (Bernard Lee) visits Bond at his home at 5:48 a.m. to assign this mission. (I can’t think why M would walk directly toward Bond’s bedroom, necessitating Bond comedically heading him off so that he doesn’t see the girl in Bond’s bed. At first, we think, ‘So what? Bond was gettin’ bizzy! None of M’s biz.’ But the girl happens to be another agent who has not reported back in. Oh, for fun! Still, what reason does M have to walk towards Bond’s boudoir in the first place. This bad blocking really bugs me!) Next, in walks Moneypenny (Lois Maxwell, who was so hot for Connery, but now treating Moore more like a confidant, by keeping his stray girl hidden from M).

Backing Bond up in the field would be Felix Leiter (David Hedison, VOYAGE TO THE BOTTOM OF THE SEA, first time in the role, but the fifth actor to play this character in Bond films – seems like this guy is more of an interchangeable alias than “James Bond” has been speculated to be). There’s also a Quarrel Junior (Roy Stewart) to callback DR. NO. But sadly, no Q. (Since Desmond Llewelyn’s first Q-pearance in FROM RUSSIA WITH LOVE, this and NEVER SAY NEVER AGAIN are the only Bond films he does not appear in.)

Kananga’s org knows Bond is in town and being chauffeured to his hotel, so they kill his driver with a poison dart. Uh, seeing as they mercilessly, efficiently terminated all other agents – one got his ears blown out, one was a tribal sacrifice, and one stabbed in the street in the iconic New Orleans-style funeral scene – why the hesitation to use the same efficiency on Bond? If you can dart his chauffeur, you can dart Bond. Just asking for a little consistency, voodoo chilrun!

Bond is “captured” by the Harlem mob and meets Solitaire (strange how they just let Bond wander around and talk to the boss’s lady, but okaaay); ravishing, with crystalline voice, delicious costumes (especially the diaphanous gown she wears later, with nothing underneath!), she presides over her tarot table, a superstition she believes so strongly that when the “Lovers” card is turned up, she feels bound to fulfill the prophecy with Bond, so that she doesn’t defy the cosmic forces aligned against her… “By compelling me to Earthly love, I am in the disfavor of the gods.” She believes the power of her clairvoyance is superseded by the power of boners. Even though Bond tricked her into it by using a deck of exclusively “Lovers” cards! Ha! Literally “stacking the deck.” It’s how we all operate. Whatever gets you to drop your panties with a clear conscience, honey!

Seymour said she visited actual tarot readers while on location. One told her she’d be married 3 times – and she confesses this affected some of her decisions in later life! Just a young, impressionable 22-year-old dumb bunny… By the way, she was married four times, her first divorce (from Attenborough) occurring in the same year this film was released. (Hmm, coincidence that as soon as this luscious nubile was revealed to the world, her marriage faltered? Don’t need tarot cards to tell you that!) 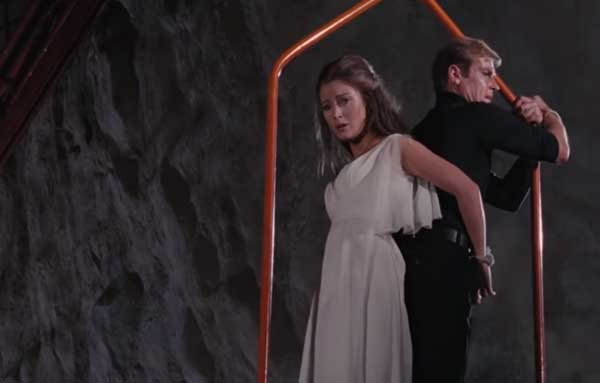 Just the way I like my women – chained to another man.

Kananga has a rubber face-mask that he dons for his secret role as “Mr. Big” – the supposed American contact for Kananga – yet when he interrogates Bond as Mr. Big, and then pulls off the mask so offhandedly when Bond insists on talking to Kananga, it proves there is NO REASON at all for the ruse in the movie, or for the superfluous character in the script.

Kananga drills Bond, “Did you touch her?!” Bond keeps deflecting. But let’s face it, unless the answer is No, it pretty much means you smashed that hotness.

The staple traits of the Bond Villain remain – I mean, why are you talking when you should be shooting? Are you slow in the head? We have to regard this as comicbook boys’ movie, right? Otherwise, the writers are taking the piss, aren’t they? Villain ordering his men to kill Bond – who then bring Bond back alive for more talking; villain concocting traps so convoluted and time-consuming that if Bond doesn’t escape, he must be slow in the head. It still surprises me how they act surprised when he’s running off with the dame in tow.

The number of times Kananga gives direct orders: “Kill him,” “Bond must die!” only to be met with his henchmen NOT doing it:

The name “Kananga” was lifted from the real life guy who owned this croc farm; the producers were drawn to the sign out front – “Trespassers will be eaten,” which we see in the movie. The real Kananga himself (dressed as Moore, complete with crocodile boots) would perform the stunt of running over the three crocodile backs to freedom. (We learn that all the poor little feet of the crocodiles were tied down during the stunt.) 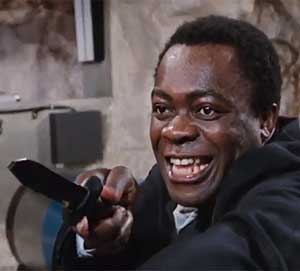 Yaphet brings a knife to a Bondfight!

Onto the powerboat chase – one of the only times that Bond is “ahead” of his antagonists. Y’see, one of Bond’s prime deficiencies as a “hero” – that many fail to notice – is how he is rarely “one step ahead” of his antagonists, like most heroes. He’s usually being “allowed” to live when he’s (always) captured. With him gunning this powerboat across bayous, over grassy knolls separating tracts of river, flying over cars in this thrusting penis, he reclaims some of his potency. Special mention to Clifton James, as obese redneck Sheriff J.W. Pepper, who somehow manages to steal these scenes while being racist as a Grand Dragon at a Klan rally.

Here’s the thing: each vignette is an enjoyable, tense, humorous aside, but they wouldn’t exist if the villains were one iota more efficient or sensible.

The climax at the voodoo sacrifice ceremony gives new meaning to Paul’s lyric: “You got to give the other fella – Hell!” as Baron Samedi tries to bring hell to Solitaire, and is rewarded by Bond bringing hell to him instead – punching Samedi into a coffin full of snakes. He looks like he went out fucking them.

Then the scene which must have inspired Mike Myers to make AUSTIN POWERS, as Kananga – who has been directly ordering Bond’s quick death the whole movie – now slowly lowers Bond and Solitaire into a pool of sharks – no, wait, that’s incorrect, the pool will SOON BE FILLED with sharks, you see, the sharks are in another enclosure and the gate has to be opened and—oh for fuck’s sake! And they don’t even have frickin’ laser beams attached to their heads. Extra Bond Villain points for first outlining his whole plan to Bond, after slicing into Bond’s arm so feebly that only one drop of blood drips gently into the water to draw the sharks…

I have to grit my teeth and remember the joy this adventure brought me as a comics-reading young boy.

Roger Moore would go on to six more Bond adventures, carrying the legacy mightily on his pasty British shoulders and between his manly smugly groin.