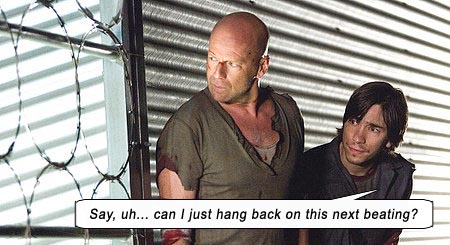 In Bruce We Trust.

Never trust a computer you can’t throw out your window.
– Steve “Woz” Wozniak.

This mess is not his fault; he’d rather be home with a cold one; he’s no superman, just an average guy who must act like a super man – and I think he’s wearing the same sweaty shirt from DIE HARD (1988).

Justin Long asks Bruce Willis (playing Detective John McClane as flippantly and dynamically as only he knows how): “What makes you That Guy?” That lovable lump, that forthright avenger, that pissed off everyman…Arnold’s pressing flesh instead of pounding it, Sly just gave his last gasp as ROCKY BALBOA, Clint Eastwood is defiantly aging gracefully, though – sadly for us – on the other side of the camera; Van Damme and Seagal? As gone as the 1990s… Is Bruce Willis the Last Action Hero?

LIVE FREE OR DIE HARD gives us every reason to believe it; a ramped, incendiary, chest-beater of a thriller and surely the best Boy’s Movie of the summer; distinguishing itself from the rash of CGI-fueled actioners by performing most of its stunts in Dangerous Real Life.

Which is ironic, considering LIVE FREE revolves around computers, pitting veteran detective McClane against a hacker, Gabriel (Timothy Olyphant) who has commandeered the nation’s networks, bringing the country to a standstill in what hackers call a “Fire Sale” (Everything Must Go) as he helter skelters the stock market, transport and energy systems, his ultimate goal, securing the accumulated virtual wealth of America. An ex-government agent, Gabriel designed the very security systems he is now breaking down. (It is quite sobering to be shown how integral the Big Bad Computer has become to our society.)

A low-tech hero in a high tech world, Luddite McClane must rely on the geek stylings of unwitting virus tester, Matt Farrell (rising star, Justin Long – is it serendipity he is the Mac Guy?) to walk him through the virtual anarchy, whilst he in turn shepherds Farrell through the bone-crunching kind, shadowed by hitmen with big automatic weapons who can’t aim.

It’d be good to be Unbreakable right about now. As the frenetic camera of director Len Wiseman (the UNDERWORLD movies) never stops creatively moving, and as we wonder how many rounds professional hitmen can expend without actually killing anyone, McClane is pummeled by all comers, not least a taut leathered Asian chick (Maggie Q) whom he doesn’t ruthlessly shoot down like the rest of the bad guys because she’s a taut leathered Asian chick. Exerting that movie double standard (which only reflects societal double standard): she can kick him as much as she wants, but he’s not allowed to dispatch her like a guy – she’s got to die “passively” (falling to her death in an elevator shaft) so it doesn’t seem “unfair.”

At least he’s got a smartarse comment to salve the pc pain.

Mary Elizabeth Winstead is McClane’s daughter, Lucy (who actually looks like an older version of the little girl who played his daughter in DIE HARD), with the best naturally rounded ta-tas I’ve seen in awhile (at least, her bra makes them so). Gabriel kidnaps her to raise the dramatic stakes and give McClane more smart-aleck jabs to throw.

Besides the obvious weathered and witty character Willis is reprising, LIVE FREE gets its kicks paralleling DIE HARD in innumerable winks to the audience: FBI Agent Johnson; the fact that McClane is in constant communication with the villain yet cannot get to him; being in communication with the authorities (Cliff Curtis, FBI chief, but to me, forever Uncle Bully from ONCE WERE WARRIORS) yet powerless to aid them or them, him; the shoulder shot – somehow he always gets it in the right shoulder, seemingly exacerbating that real life scar he already sports there; once again he is attacked by air support and screams to the pilot, “I’m on your side, assholes!” (in an insane sequence battling an F36 Harrier jet which is not the least bit plausible); in a broken and bedraggled state, he greets his daughter the same way he greeted his wife in DIE HARD, as if it’s all in a day’s work, “Hi honey”; and – like his estranged bitch wife before her – his daughter is tough little “Mz. Gennero” until McClane’s man-sized rescue levels her fem-lib posturing and she reverts back to Daughter McClane. But Beethoven’s Ninth – though used in trailers – was sorely missed.

Probably the most obvious callback to DIE HARD is that which reminds us that this movie isn’t in the spirit of DIE HARD – the catchphrase “Yippie ki yay, motherfucker!” As you’ve seen on the sides of buses (in the most annoying advertising campaign since “Jack FM–We play what we want”), the “motherfucker” is shortened to “mo” as if the billboard has run out of space or been cut off. If this was just the advertising, we could shrug it off as a smart way to convey the street without being explicit, but the movie itself is rated PG-13, in that painfully obvious “summer audience” grab, sanitizing the film to grade school speak. Upon re-watching the R-rated DIE HARD series the characters come so much more alive when allowed to speak like hard men under pressure; infinitely more believable as ruthless combatants involved in death struggles. LIVE FREE OR DIE HARD is stunt piled on stunt so we don’t notice the lack of street dialog.

So when Olyphant is criticized for lacking gravitas as the villain, it may just be because his mouth is soap-washed for family viewing, not because of his metrosexual youth (anyone over 30 would have been too old to be a hacker anyway). Going for Bond, smooth criminal élan was probably a wrong turn – maybe he should have tried for Johnny Lee Miller in HACKERS: bottle-blond leatherboy.

The actual “Yippee ki yay mo” moment is as truncated as its bus billboard. But the circumstance itself is an action gem. Screenwriter Mark Bomback and co-story David Marconi arrive at a situation where McClane’s wounds play an integral creative part in the demise of the villain who caused those wounds. It’s an amazing little conundrum – with a nifty solution by McClane.

Set in Washington D.C. during a July 4 weekend (so there is no need to excuse the American flags aflutter everywhere), the title could be construed as a grim reminder to real life Americans who flutter that flag unthinkingly – LIVE FREE… For is it also serendipity that Olyphant’s villain seizes criminal control of the virtual world at a time in America’s dark present when the Bush administration is trying to do just that by tapping the internet without warrants?

No denying it, we love Bruce Willis as John McClane. After his intense turns as deeper characters in HOSTAGE (2005), SIN CITY (2005), 16 BLOCKS (2006), he’s back at his shallow best. Taking cover behind corners, pointing a gun, or limping in pissed off pain, he looks like himself again. At a slammin’ 52, Willis still reeks of Hero; still ranks as someone who gives bruises as good as he takes ‘em; still rocks when he’s in the wrong place at the wrong time.

That’s what makes him That Guy.