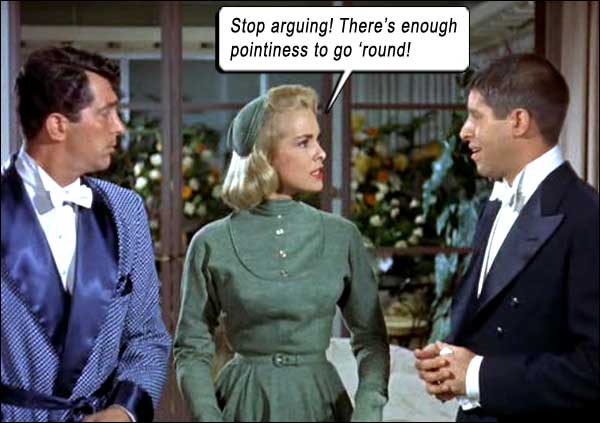 Homer Flagg is dying of radiation poisoning. His last wish is to visit New York. An avaricious New York editor, hoping to boost sales of his newspaper, brings Homer and his exclusive doctor on an all-expenses-paid final fling to New York. But Homer’s not really dying. His doctor made up the disease by mistake – and continues the ruse to keep LIVING IT UP on the newspaper’s dime. So what happens when Homer continues to not die?…

Jerry Lewis is Homer (of course his name is Homer), who desperately tries to leave his native dustbowl of Desert Hole, New Mexico, by stealing a car from an atomic test site. When it is discovered the car may be radioactive, he is diagnosed with radiation poisoning. Dean Martin is Dr. Steve Harris (of course his name is Steve), the local singing quack who realizes his mistaken diagnosis only after the news has been published in national papers. 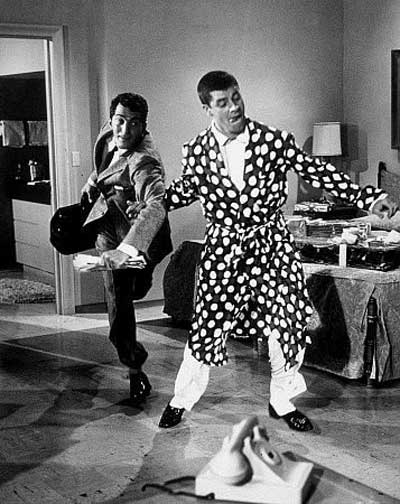 Dean and Jerry race to make the last booty call at the Playboy mansion.

In the offices of The New York Chronicle, reporter Wally Cook (Janet Leigh and her pointy bra) pitches a story to her exasperated editor, Oliver Stone (Fred Clark, who was “Old Skinhead” in THE CADDY), of a dying boy with a rare disease whose last wish is to see New York, and how it would boost The Chronicle’s sales if it was to fund that wish, also nabbing the exclusive day-to-day story of Homer until his death.

Dr. Harris meets firecracker Wally, is immediately smitten by her pointy bra, and his intent to tell the truth goes out the door with his Hippocratic Oath (the plaque of which cracks open on his skull).

(And no, Steve Harris was not yet Iron Maiden’s galloping bassist, and Oliver Stone was not yet the insurrectionist filmmaker…)

So New York welcomes Homer and Steve unto its bosom, with Steve trying to make Wally at every opportunity, and Homer exploiting the generosity of The Chronicle (ordering tailor-made suits, manicures, and 3000 shrimp cocktails for his hordes of admirers keeping vigil outside the hotel), while Oliver Stone grimaces and prays for Homer’s quick demise…

1954’s LIVING IT UP is a lively remake of 1937’s NOTHING SACRED (starring Carole Lombard and Fredric March), with screenwriter Melville Shavelson and director Norman Taurog (on his fourth Martin and Lewis feature) reworking the tale around Martin and Lewis’s screwball antics; borrowing songs from HAZEL FLAGG, the successful 1953 Broadway musical inspired by the original movie (music, Jule Styne; lyrics, Bob Hilliard). Thus, every time Wally wants to bring in specialist doctors to examine Homer, Steve keeps croon-blocking her, sneaking in How Do You Speak To An Angel? and Money Burns A Hole In My Pocket. Homer duets with Steve on the catchy Every Street’s A Boulevard In Old New York, where they don top-and-tails and tap their way across the city, Jerry’s caterwauling somehow gelling with Dean’s velvet fog. 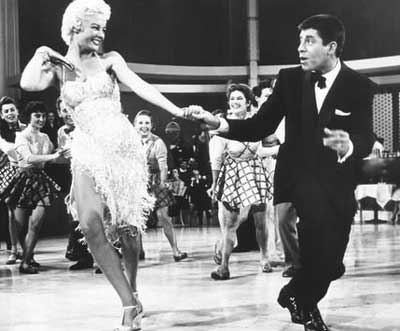 Sheree North – would have been the next Marilyn Monroe,
if she wasn’t so talented.

And as they sing about New York, we have to remember: these guys were the kings of that town, packing the seats and the streets during their appearances; no strangers to the song’s sentiments: “All the folks who live on a street like 11 / Are as fine as the family on a hundred and seven…” “It’s a thrill to shop on 34th Street / Or down in Union Square…” “Just remember there’s the East Side / And the West Side / And Uptown and Down / That’s why we’re proud to be a part of New York town!” I can imagine this song alone, even without the context of the movie, endearing them to their rabid fans.

And the dancing! These guys were not just pratfallers and jokesters – they could really hoof it! Adept at all the current styles of vaudeville and tap-dancing, when they floated in sync it was a thing of beauty! Jerry even showcases his ferocious jitterbugging (in a scene featuring actress/dancer Sheree North, who was touted as “the girl who would take over from Marilyn Monroe”). It’s these scenes that remind us of the amount of work that went into the upkeep of the Martin-Lewis comedy team, and how they sweated blood to stay miles ahead of anything else that was out there.

An actual plot and predicament, a remake of a well-loved farce, hit songs from the popular stage play, their second feature film in color, and grand farce performances from the highest paid comedy team in the world – all contribute to LIVING IT UP becoming one of the top-grossing Martin and Lewis movies, and ultimately one of their true “classics.”

It is when three international doctors do visit that Homer and Steve’s jig is up. Setting the stage for the funniest scene in the movie: Jerry showcasing his extraordinary mimicry when he plays all three doctors (from Vienna, Hong Kong and Paris) to distract them from his/Homer’s condition. Watch for the fastidious Sig Ruman, reprising his role from the 1937 film as Dr. Egelhofer from Vienna.

The scene before the doctors’ visit shows Steve trying to send Homer into a coma by sparring with him and punching him on the chin. Strangely enough, this scene is almost a replica of the scene in NOTHING SACRED – but we wonder how that can be, as that previous radiation patient was a woman. Well, that’s how weird that woman-bashing scene feels (even though it’s funny), as the woman is knocked out by a guy through a sock on the jaw. 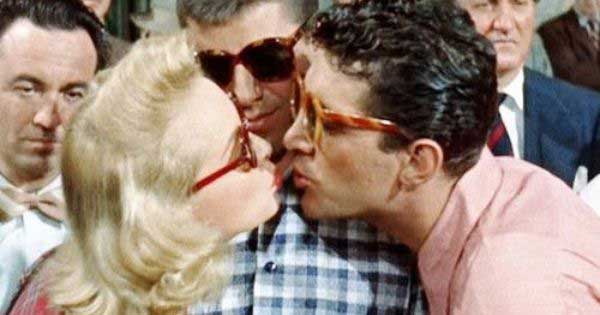 The only time a gleeful look would cross Oliver’s face is when Homer faints or seems close to the end. When the doctors report Homer’s clean bill of health to Oliver, he becomes as murderous as the “sluggers” he calls in, to ensure Homer’s death, and to staunch the newspaper hemorrhaging money. He repeats the same dialogue from the original, to Wally (who still thinks Homer is sick), “I am sitting here, toying with the idea of removing your heart and stuffing it like an olive.”

Sexy Wally, with a waist the size of a wrist, promises herself to Steve, although this is a contrivance just to follow Romantic Movie Protocol. Steve might want to go straight, being in love with Wally (“the works: marriage, white picket fence,”), but he neglects to take her workaholic characteristics into account. She’s an ink-blooded newspaper hound through and through, “married to the front page of The Chronicle.” Why should her career be stultified or her character change to subservient just because Steve proclaims his love for her? Just another sign of how women were treated in those times – taking it for granted Wally is working hard merely until she finds a man, and then she’ll settle with the barefoot-in-kitchen-three-kids routine!

By the time Homer is faking his suicide, the farce has escalated out of control. Whereas he and Steve were lodged in the upscale Park Ritz, the movie concludes with them as street-sweepers in front of it. In the simplistic “up” ending, that doesn’t delve into the darker areas of attempted murder, fraud, and perjury, Homer and Steve are still in love with the town, as they reprise Every Street’s A Boulevard from street level…