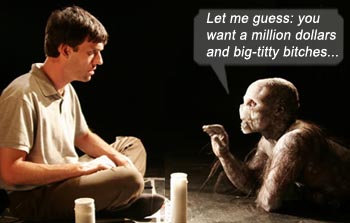 Justin (Ward Roberts) has lost his girlfriend April (Sarah Lassez), so summons the demon Lo (Jeremiah Burkett) to get her back. Not the usual modus operandi of getting drunk and scoring a hooker to numb the pain, but pretty badass nonetheless. But nerd Justin is not summoning Lo out of badassery, but whipped-assery – even though his girl is proven to be a demon herself (which explains her loopy behavior as a human), his groin continues to pine for her demon seed and we are not shown any reasons why it should ache so.

Except that he’s a pussy. And she probably laid him like railroad track.

AMBITIOUS: art-film, cult-film, call it what you will, writer-director Travis Betz pulls together a static yet kinetic horror-comedy that doesn’t quite succeed as horror or comedy. Though it fails in interesting ways… Aims for the alien impact of the original PLANET OF THE APES movie and ends up looking like the TV series; attempts the dark humor of Kubrick and hits the low humor of Sandler. Travis Betz creates a movie at war with itself.

INDEPENDENT: the seams are showing – literally. With the obviously non-existent budget, Travis Betz did the best he could, but the eyeholes of the characters’ headpieces aren’t quite convincing, though the rest of the demon makeup is excellent. Also, a one-location shoot doesn’t necessarily give away a film as independent, but one location that is set-dressed so shabbily kinda does.

SMART: a retelling of Faust with an interesting twist.

DUMB: Just because you can say ‘fuck’ (with no MPAA restrictions) doesn’t mean you have to. Sprinkling this word in the demons’ dialogue as if they were schoolboys simply cheapens their ominousness. And doesn’t add to the comedy either. A demon should use the word fuck only in its original context – to describe coitus (as in, demons don’t need to tiptoe around the physical act disguised as something metaphysical). That would be more scary. And true. As in, after you have coitus with a girl, she starts acting like a demon.

I like the fact that Betz is going out on the edge, but his demons are simply not gripping enough for my unholy tastes. When Lo first appears, it is disturbing, but as soon as something alien speaks English, sings songs and even uses ‘fuck’ as an expletive, it becomes less threatening. Something that communicates in your own language can be reasoned with. Less alien, ergo less terror.

Yet there is an underlying fear – which Justin wonders aloud many times – on whether the demon is telling him truths or lies, and only trying to trick him out of the pentacle that simultaneously protects Justin and entraps him. Lo christens Justin “Dinner” and openly tells him it’s a chess game to get him out of the pentacle to eat him, but it degenerates to the demon actually listening to Justin and having a back-and-forth, rather than angling the conversation to his own ends. And why does the tiresome singing demon Jeez (Devon Barry) warn Justin that April is a demon? Besides the fact that Betz wanted to compose a showtune and thought that singing that plot point would make it less obvious that it was being stated so obviously.

To show he has moved on from amour fou, Justin burns the Summoning Book – a mystical tome that April bequeathed him and told him to burn in the first place. It is meant to signify that he no longer needs to summon demons to retrieve April; it is meant to be a lifting of the veil, a new dawn — but hang on! April’s presence was never predicated by the existence of that book; Justin met her in a cheap restaurant after she “escaped” the boundaries of “hell” and was hiding out in human form. Her backstory tells us she was a blood-crazed slayer and for whatever reason, was giving herself a holiday from mutilating souls. In the present, she is summoned and tells Justin within the pentacle that she is not right for him and has to leave blah blah, but the unspoken fact is, she can appear again at any time, seemingly at her whim. So by burning the book, Justin is simply back at Square One; his journey took him nowhere.

LO is not a cult ‘classic,’ but it will garner its share of culties. The resourcefulness of the crew shows young filmmakers what can be done with just this, this and this, but it doesn’t seem completed, almost like the draft of a film. It resembles a stage play (filmed in one location over three days), but the acting seems forced (obviously no budget to do numerous takes) and the chemistry between Justin and April is written into the words rather than played out onscreen.

Is the message that all women are demons and not worth pursuing? ‘Cause we already knew that.